Section 3: From the Field - Integrating Vision and Eye Health Into a Team-Based Care Approach for Diabetes 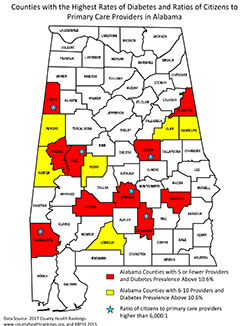 In Alabama, rates of blindness and other complications from diabetes are a great concern. To address this public health problem, staff in the Alabama Department of Public Health (ADPH)external icon used CDC’s PPOD program to bring together pharmacists, podiatrists, optometrists, and dentists in a team-based intervention.

A coalition was formed to oversee implementation of the intervention. Members included representatives from the Eyesight Foundation of Alabama, Sight Savers, the Alabama Institution of the Deaf and Blind, and the Department of Rehabilitation Services, as well as local optometrists and ophthalmologists.

About the Expert in the Field

Betsy Cagle works for the ADPH and was involved in implementing the PPOD intervention.

Return to Examples of Vision and Eye Health Interventions