Adults are at risk of illness, hospitalization, disability, and, in some cases, death from vaccine-preventable diseases, particularly influenza (flu) and pneumococcal disease. CDC recommends vaccinations for adults based on age, health conditions, prior vaccinations, and other factors (3) to prevent vaccine-preventable diseases and related outcomes. Many adults are not fully vaccinated, leaving them vulnerable to preventable infectious diseases.

This report summarizes data on vaccination coverage for U.S. adults 19 years and older from the 2016 National Health Interview Survey (NHIS) (4). The NHIS is an in-person survey of eligible civilian non-institutionalized adults.  Information on receipt of vaccinations, health and health care is self-reported and not verified through review of medical records or other means (5). 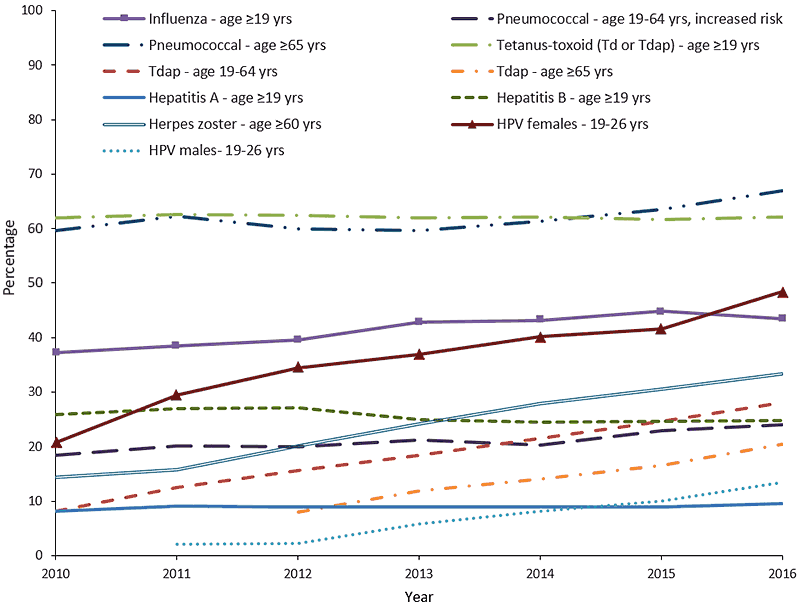 To improve vaccination coverage, providers and provider organizations are encouraged to increase awareness and use of tools for implementing the Standards for Adult Immunization Practice. In addition, CDC encourages healthcare providers to consider immunization quality improvement projects that may result in measurable increases in adult immunization rates. Nationwide adoption of electronic health records, electronic patient portals, and patient-directed clinical decision support offer opportunities for improving adult vaccination rates (5). Some states are implementing innovative strategies to enhance vaccine access. For example, the Oregon Immunization Program has established a “mini-grant projectexternal icon” where annual funding announcements are issued and any group interested in providing or promoting immunizations can apply. This may include local health departments, clinics, or coalitions who are working with underserved populations within their own communities. The Massachusetts Department of Public Health has partnered with Center for Health Care Financing (CHCF) to implement a vaccination billing service for local health departmentsexternal icon to ensure that the local health agencies are able to receive reimbursement for vaccines administered to patients with various health insurance plans, including Medicaid, Medicare part B and private health insurance plans. The Massachusetts Department of Public Health has also developed a strategy to help local health departments and other community health centers reach and vaccinate uninsured and disparate populations, which is highlighted in their guide to reaching and engaging diverse communities pdf icon[61 pages]external icon.

NHIS collects information about the health and health care of the noninstitutionalized U.S. civilian population using nationally representative samples. Face-to-face interviews are conducted by the U.S. Census Bureau for CDC’s National Center for Health Statistics. Non-institutionalized adults 19 years and older with interviews conducted during August 2015-June 2016 (for influenza vaccination) and January–December 2016 (for pneumococcal, Td, Tdap, hepatitis A, hepatitis B, herpes zoster, and HPV vaccination) were included in this analysis. The total adult sample was 32,626 persons ≥19 years. The final sample adult component response rate for the 2016 NHIS was 54.3%. The final sample adult response rates for estimating influenza vaccination coverage for the 2015-16 influenza season were 55.2% for 2015 and 54.3% for 2016. NHIS methods have been previously published. Questions about receipt of vaccinations recommended for adults are asked of one randomly selected adult within each family in the household and have been described previously (5). Weighted data were used to produce national vaccination coverage estimates. For non-influenza adult vaccination coverage estimates, the weighted proportion of respondents who reported receiving selected vaccinations was calculated. To better assess influenza vaccination coverage for the 2015-16 season, the Kaplan-Meier survival analysis procedure was used. Point estimates and 95% confidence intervals (CIs) were calculated by using statistical software to account for the complex sample design. T tests were used for comparisons between 2016 and 2015 and, for comparisons of each level of each characteristic (e.g., race/ethnicity), to a chosen referent level (e.g., for race/ethnicity, non-Hispanic white was the reference group). Statistical significance was defined as p<0.05. Coverage estimates are not reported for small sample size (n<30) or relative standard error (standard error/estimates) >0.3. Influenza vaccination coverage estimates from NHIS (≥19 years) reported here differ by 1.8% from previously reported estimates from BRFSS (Behavioral Risk Factor Surveillance System) (≥18 years); however, vaccination trends were similar during the 2009-2010 through the 2015-2016 seasons; racial/ethnic vaccination differences were similar.