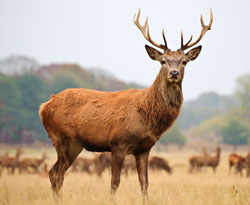 Scientists believe CWD proteins (prions) likely spread between animals through body fluids like feces, saliva, blood, or urine, either through direct contact or indirectly through environmental contamination of soil, food or water. Once introduced into an area or farm, the CWD protein is contagious within deer and elk populations and can spread quickly. Experts believe CWD prions can remain in the environment for a long time, so other animals can contract CWD from the environment even after an infected deer or elk has died.

The CWD prion has been shown to experimentally infect squirrel monkeys, and also laboratory mice that carry some human genes. An additional study begun in 2009 by Canadian and German scientists, which has not yet been published in the scientific literature, is evaluating whether CWD can be transmitted to macaques—a type of monkey that is genetically closer to people than any other animal that has been infected with CWD previously.  On July 10, 2017, the scientists presented a summary of the study’s progress (access the recorded presentationExternalexternal icon), in which they showed that CWD was transmitted to monkeys that were fed infected meat (muscle tissue) or brain tissue from CWD-infected deer and elk. Some of the meat came from asymptomatic deer that had CWD (i.e., deer that appeared healthy and had not begun to show signs of the illness yet). Meat from these asymptomatic deer was also able to infect the monkeys with CWD. CWD was also able to spread to macaques that had the infectious material placed directly into their brains.

This study showed different results than a previous study published in the Journal of Virologyexternal icon in 2018, which had not shown successful transmission of CWD to macaques. The reasons for the different experimental results are unknown. To date, there is no strong evidence for the occurrence of CWD in people, and it is not known if people can get infected with CWD prions. Nevertheless, these experimental studies raise the concern that CWD may pose a risk to people and suggest that it is important to prevent human exposures to CWD.

Additional studies are under way to identify if any prion diseases could be occurring at a higher rate in people who are at increased risk for contact with potentially CWD-infected deer or elk meat. Because of the long time it takes before any symptoms of disease appear, scientists expect the study to take many years before they will determine what the risk, if any, of CWD is to people.