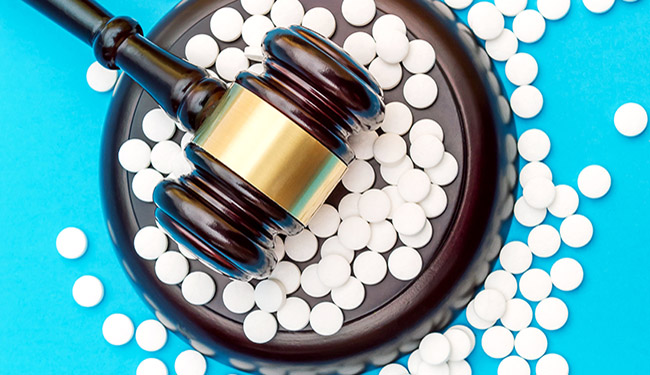 Webinar: Opioid Litigation and Its Impact
Join this webinar to be held on October 22 from 12:00–4:00 pm (EDT). The RAND Institute for Civil Justice and the RAND Kenneth R. Feinberg Center for Catastrophic Risk Management and Compensation have assembled a distinguished group of attorneys, judges, and scholars to discuss opioid litigation and how they view its impact on the future of mass litigation. Review the agenda and registerexternal icon.

Hiring: General Counsel (New York City)
The New York City Department of Health and Mental Hygiene is seeking a General Counsel to act as chief legal officer for the legal department, report directly to the Commissioner of Health, and advise on legal obligation and strategy initiatives for the department. Deadline for applications is December 31. Learn more about the positionexternal icon (search for Job ID #432735).

Law and Policy Pathways: Equity in Birth Outcomes
This guide, published by the Network for Public Health Law, provides an overview of key law and policy measures around improved maternal and child health. The one-page conceptual guide shows a pathway to alleviate disparities in maternal morbidity and mortality and also ensure that conditions for optimal birth outcomes are present for all. View the guideexternal icon.

California Governor Gavin Newsom signed this collection of bills on September 25 intended to close gaps in behavioral health care coverage. SB 855external icon expands required coverage of treatment for behavioral conditions, for both mental health and substance use, creates a standard for the utilization of clinical guidelines, and establishes standards for what is “medically necessary.”

The new package of bills expands required coverage by commercial health plans and insurers, not all of which were supportive. The California Association of Health Plans believes that SB 855 “recklessly defines medical necessity in a way that will undermine the ability of providers to determine what is clinically appropriate for their patients… [it may] open the door for unlicensed providers and facilities to treat those suffering from mental health and substance use disorders, which puts vulnerable patients at risk.”

The Maine legislature passed a law (HP 036)external icon that grants the state $200,000 to address dementia care, pursuant a federal law (Public Law 115)pdf icon[PDF – 311KB]external icon. Maine, which has the highest proportion of citizens aged over 65 of any state, will use the funds to create and expand programs to prevent dementia, including Alzheimer’s disease.

The funding, which can be renewed until 2023, will be used by governmental actors as well as non-governmental entities.

Maine is the first of 15 eligible states to receive the award.

Arizona: An Arizona district judge did not grant a federally funded irrigation company’s motion to dismiss a Native American community’s complaint. The tribe alleged that the entity supplied them with contaminated water and breached their agreement with the American government.

The Ak-Chin Tribe of Pinal County claimed that the Maricopa-Stanfield Irrigation & Drainage District, a corporation contracting with the United States, has consistently undersupplied their community with water suitable for irrigation and has instead supplied them with lower-quality groundwater, a violation of the 1984 Settlement Act. In its motion to dismiss, the defendants alleged that the Ak-Chin improperly filed the suit in a federal court without joining a necessary co-defendant, the US government. The judge did order the tribe to join the United States as a party.

California: A federal court in California held that class action suit against CVS Pharmacy may proceed. The plaintiff, Danielle Lokey, representing on behalf of other potential injured parties, alleges that CVS illegally sold its store-brand liquid acetaminophen at a higher price when advertised as a formulation specifically for infants, which would be a violation of the state’s consumer protection laws.

CVS filed a motion to move the case to federal court, arguing that the store brand acetaminophen does not have state-specific packaging and any injunction requiring a change in California would affect sales nationwide. The potential costs estimated by CVS would exceed the amount required to bring the suit to federal court under California’s Class Action Fairness Act. The plaintiff challenged CVS’s motion, arguing that defendants inflated their cost estimation in order to force a change in jurisdiction.

The court held in favor of CVS, stating that the defendant provided sufficient evidence to support their estimate and that the plaintiff “did not meaningfully counter [CVS’s] assessment.”

Ohio: An Ohio district court denied a Cleveland hospital’s motion for summary judgment regarding a discrimination suit brought by patient who is deaf. The court found that “reasonable jurors could find that [the] Defendant essentially failed to act to protect Plaintiff’s rights as a deaf person,” adding that the jury could find “an element of deliberateness” to the alleged discrimination.

In May 2018, plaintiff Alicia Tokmenko sustained life-threatening injuries in a motor vehicle accident and was transported to a MetroHealth medical center. According to the complaint, Tokmenko’s mother informed hospital staff that the plaintiff was deaf and relied primarily on American Sign Language (ASL). MetroHealth supplied Tomenko with pens and papers, whiteboards, and video relay interpreting equipment in order to aid communication, in addition to using Tokmenko’s mother and daughter as interpreters. Tokmenko states that these methods did not enable her to make informed medical decisions, and that her preference for American Sign Language and repeated requests for a professional ASL interpreter were ignored in violation of the Americans with Disabilities Act and the Affordable Care Act.

“Mental healthcare is essential to a person’s overall health, and today, we reaffirmed that people must have access to care for mental health and addiction challenges.” —Senator Scott Wiener, California