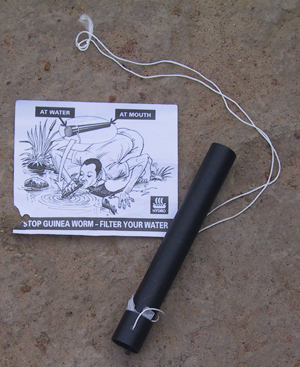 The Guinea Worm Eradication Program (GWEP) is a group of national and international partners whose purpose is to support the global eradication of Guinea worm disease (GWD). Prevention of GWD is based on the following:

Many of these interventions are provided by village volunteers—people who are selected by the community to work with the GWEP. Village volunteers are the backbone of the program. In their communities, they identify and manage people with GWD and prevent them from contaminating drinking water sources (case containment). They also distribute water filters and provide health education to the community.

GWEP village volunteers look daily for GWD cases in their communities. Every month they report the total number of cases detected in their communities to supervisors who compile this and send it to the national GWEP headquarters. This information is then shared with The Carter Center and the World Health Organization (WHO). The GWEP uses this information to identify where transmission is ongoing and to understand how the disease is spreading. 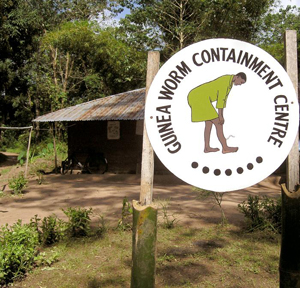 Case containment is one of the key methods used to prevent the spread of GWD. Case containment centers have been built in strategic locations in several countries[1]. These centers provide treatment and support to people with GWD and help prevent them from contaminating water sources. A case of GWD is considered to be contained if all of the following conditions are met[2, 3] .

The criteria for defining a contained case of Guinea worm disease in a human also should be applied, as appropriate, to define containment for an animal with a Guinea worm infection. 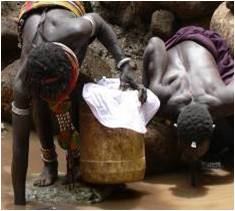 Safe drinking water sources include bore-hole wells and deep hand-dug wells with protective walls around them that prevent contaminated water from flowing back into the well (e.g., after rains or floods or if someone pours/spills water nearby the well). Flowing water, such as that found in a stream or river, is also safe from Guinea worm. The GWEP advocates for the development and maintenance of safe drinking water sources. It also encourages treatment of potentially contaminated drinking water. Fine-mesh cloth filters are given to households to strain out copepods (tiny “water fleas” too small to be clearly seen without a magnifying glass) from contaminated drinking water where there are no safe water supplies. People who travel or work away from the household and might not have access to filtered water are given individual pipe filters. These devices are used like straws to drink water from unsafe water sources.

A vector is an organism that carries or transmits disease. The vector for GWD is the copepod. To control this vector, the GWEP puts a measured amount of the approved chemical temephos (ABATE®*) into the water sources that are suspected or known to be contaminated with Guinea worm-infected copepods. This chemical kills the infected copepods and prevents people from becoming infected with GWD when they drink the water. 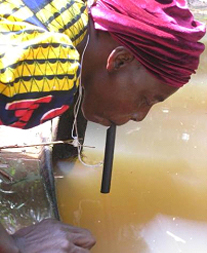 Health education and community mobilization are important aspects of GWD eradication. Activities include the following:

*Use of trade names is for identification only and does not imply endorsement by the Public Health Service or by the U.S. Department of Health and Human Services.