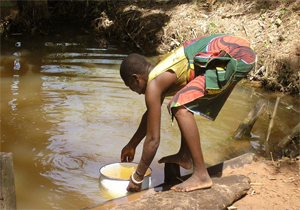 Today, GWD affects poor communities in remote parts of Africa that do not have safe water to drink. People become infected with Guinea worm by drinking stagnant water containing copepods (tiny “water fleas” too small to be clearly seen without a magnifying glass) that carry Guinea worm larvae (immature forms of the worm). The larvae are swallowed by the copepods that live in these stagnant water sources. The larvae need about 2 weeks to mature inside the copepods before they can infect humans. Unsafe stagnant water includes ponds, pools in drying riverbeds, and shallow hand-dug wells without surrounding protective walls. Anyone who drinks from contaminated water sources can become infected. GWD is not normally caught from drinking flowing water (rivers and streams) [1, 2, 3] . Alternatively, persons who live in countries where GWD is occurring and consume raw or undercooked aquatic animals either whole or in part (such as small whole fish that have not been gutted, fish guts, and frogs) might also be at risk for GWD [4] .

The risk for disease varies by sex, age, profession, and ethnicity. These differences reflect how and where people get their drinking water in different areas and countries. In general, about the same number of men and women get infected. GWD occurs in all age groups but it is most common among young adults 15–45 years old. This may be because of the type of work done by people this age. Farmers, herders, and those fetching drinking water for the household may be more likely to become infected, possibly because they drink contaminated stagnant water while away from home. In certain areas, GWD affects some ethnic groups more than others [1, 2, 3] .

The greatest risk for GWD is having GWD the year before. People do not become immune to infection. In the past, when the number of GWD cases was higher, some people in affected villages suffered from GWD year after year. This was probably because the same water sources were repeatedly contaminated. It also might have been related to some biological characteristic of the person that increased susceptibility. Not everyone drinking from the same contaminated water supply will become infected. A few people seem to keep getting infected while others drinking the same water do not [1, 3, 5] .

Since 2012, an unusual epidemiologic pattern has been recognized in Chad. While the number of cases in humans has remained limited, there have been large numbers of infections recognized in dogs, particularly in the area along the Chari River. This has led to consideration of the possibility of GWD transmission though a previously unrecognized route—consumption of fish, frogs, or other aquatic animals that carry Guinea worm larvae, but do not themselves suffer the effects of transmission [6]. The situation is being carefully investigated [7] and control measures have been implemented (for example, tethering of dogs, education to remind area residents to fully cook aquatic animals before eating them, and requests to not feed fish guts to dogs) [4].