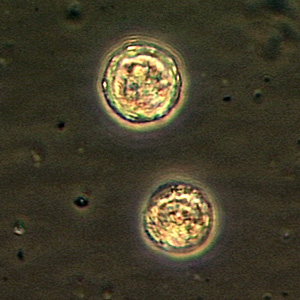 Balamuthia mandrillaris is a free-living ameba (a single-celled living organism) found in the environment. It is one of the causes of a serious infection of the brain called granulomatous amebic encephalitis (GAE) . GAE is a very rare disease that is usually fatal.

CDC first discovered Balamuthia mandrillaris in 1986. The ameba was found in the brain of a dead mandrill (a type of primate). After extensive research, B. mandrillaris was determined to be a new species of ameba in 1993. Since then, more than 200 cases of Balamuthia infection have been diagnosed worldwide, with over 100 cases reported in the United States.

Balamuthia infection is not spread from person to person.

Balamuthia infection can occur at any time of year . 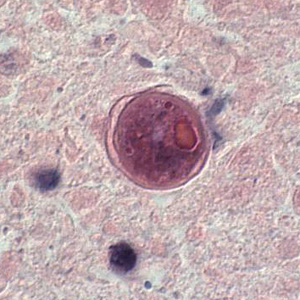 The symptoms of Balamuthia infection can begin with a skin wound on the face, chest, torso, arms, or legs. If the infection involves the brain, the disease it causes is called granulomatous amebic encephalitis (GAE). Diagnosis of Balamuthia GAE can be difficult because symptoms are not specific to GAE. Early symptoms might include:

The disease might appear mild at first but can become more severe over weeks to several months. Often the disease is fatal, with a death rate of 90%. Overall, the outlook for people who get this disease is poor, although early diagnosis and treatment may increase the chances for survival.

The length of time from infection to the time symptoms appear is unknown. It can take weeks to months to develop the first symptoms of Balamuthia GAE after initial exposure to the amebas.

The duration of symptoms for GAE is highly variable with some people being sick for just a few days and some having symptoms for weeks or months. Although Balamuthia GAE is often fatal, there are several recorded cases of Balamuthia infection where the patients survived after long-term treatment with multiple drugs. In some of those cases, the patients were able to return to normal, functioning lives.

Balamuthia can infect anyone; this includes persons that are healthy or persons with weakened immune systems (such as persons with HIV/AIDS, cancer, liver disease, diabetes mellitus, persons taking immunosuppressive drugs, and people who have had organ transplantation).

Contact your healthcare provider as soon as possible if you think you may have a Balamuthia infection.

Doctors and scientists must use special tests to identify Balamuthia. These tests are not widely available, but CDC is available to help with testing.

Currently, treatment recommendations include the use of a combination of several drugs. Most cases of Balamuthia are diagnosed right before death or after the patient has died. This delay in diagnosis limits the amount of experience doctors have using different drugs to treat Balamuthia infection. Current treatment plans are based on lab studies of the ameba and the few cases where the patients have survived.

No. There have been no reports of a Balamuthia infection spreading from one person to another except through organ donation/transplantation.