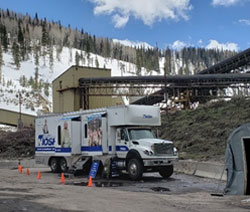 Black lung, caused by the inhalation of too much coal dust, is no longer just a disease that strikes older coal miners. The National Institute for Occupational Safety and Health (NIOSH) released a video today that demonstrates how black lung is occurring in younger miners, raises awareness of the personal costs of the disease, and motivates workers to participate in free and confidential health screenings. Dr. Anne Schuchat, Principal Deputy Director of the Centers for Disease Control and Prevention (CDC), provides an introduction to the video and urges miners to get screened in order to detect the early signs of black lung.

Rates of black lung disease, or coal workers’ pneumoconiosis (CWP), has more than doubled over the last fifteen years. Faces of Black Lung II – The Story Continuesexternal icon, a follow-up to the first Faces of Black Lung video produced over ten years ago, leads the viewer through a short history lesson on miner protections, beginning with the Federal Coal Mine Health and Safety Act of 1969 and the establishment of NIOSH’s Coal Workers’ Health Surveillance Program. It very quickly transitions to the stories, in their own words, of three young miners who are experiencing the severity of the disease and are confined to the home. The miners are in their 30s and 40s, much younger than the workers who appeared in the Faces I video – in their 50s. 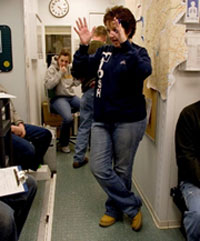 “Black lung is entirely preventable, and if effective dust controls are carefully applied and dust levels are accurately monitored, we will be one step closer to eradicating this disease,” says Anita Wolfe, public health analyst and program coordinator of NIOSH’s Coal Workers’ Health Surveillance Program. “NIOSH encourages miners to take advantage of free screenings in order to detect the early signs of black lung, often before the miner is even aware of any lung problems.”

Catching the disease early can allow miners to take steps to keep it from progressing to severe lung disease. In addition to the testimonials from three miners, Faces II provides brief commentary from medical experts, describing the severity of the disease and its implications. Black lung can occur in miners who work in mines of all sizes. Certain mining jobs like continuous miner operators, shuttle car operators, surface drillers and blasters, or high wall and thin seam miners, as well as those working in smaller mines, have an increased risk of developing CWP. Communities of miners working in Eastern Kentucky, Southern West Virginia, and Southwestern Virginia have seen a particularly high increase in black lung.

Under the NIOSH Coal Workers Health Surveillance Program, miners have the opportunity to have a chest x-ray, a breathing test, and a respiratory assessment, every 5 years at a nearby clinic. This screening is free and confidential to the miner. NIOSH will notify miners when they are eligible for this screening. NIOSH also has a mobile screening program housed in a mobile unit that travels to mining regions around the United States; miners are encouraged to make an appointment to participate, or walk-in when it is in their area.

The Faces II video will be disseminated to coal miners upon request, coal mine operators, physicians, industrial hygienists, trainers, and others interested in the health of coal miners. The Faces I video has been used extensively in new miner and refresher safety and health training for coal miners.

NIOSH is the federal institute that conducts research and makes recommendations for preventing work-related injuries, illnesses and deaths. For more information about NIOSH visit www.cdc.gov/niosh.