On March 24, 1998, a 39-year-old male tree cutter (the victim) died of injuries sustained when he was struck by a log which had fallen from the top of a loaded log truck. Just prior to the incident, the victim had finished cutting for the day and returned to landing. Evidence suggests that he approached a truck which had been previously loaded and whose load had not yet been secured. The logs were stacked higher than the standards on the sides of the truck. Evidence also suggests that the victim attempted to begin securing the load himself. It is unclear as to whether or not the victim tried to access and/or manipulate the load. At approximately 4:30 p.m., the company’s owner, who was operating a dozer as a skidder, had just arrived at the landing area and noticed the victim lying on the ground next to the truck with the load-securing chain. Parallel to the victim and within three feet was a 12-foot log approximately 12 inches in diameter. The victim had experienced massive blunt chest trauma as a result of being struck by the falling log. The first responder (the owner) turned the victim on his back and began administering CPR. He then yelled for help at which time other workers responded and called emergency medical services (EMS). The local EMS transported the victim to a local hospital where he was pronounced dead. The coroner estimated the time from injury to death to be minutes. The WV FACE Investigator concluded that to reduce the likelihood of similar occurrences, employers should:

Additionally, manufacturers and employers should:

On March 24, 1998, a 39-year-old male log cutter (the victim) was killed after being struck in the chest by a log which had fallen off of a loaded logging truck. On March 25, 1998, the West Virginia FACE Investigator was notified of the death by the West Virginia Division of Forestry (DOF). On April 24, 1998, the WV FACE Investigator and a NIOSH Division of Safety Research (DSR) safety specialist conducted an investigation of this incident. The investigators reviewed the incident with the WV DOF representative and did an onsite investigation. The owner of the logging company (first responder) as well as other employees (secondary responders) were interviewed. The incident site and the logging truck were photographed. Other informational sources and contacts included: death certificate, medical examiner’s report, newspaper articles, OSHA, and responding EMS.

The employer in this incident was a logging company that had been in business for three years and employed three employees. All employees were present the day of the incident as well as the owner of the operation. Typically, the employees were cutting while the owner was skidding and loading the harvested timber. Total number present during above timbering operation was four. This particular 20-acre marked timber stand was being selectively timbered for the pulpwood market.

The owner and all employees (including the victim) held Certified Logger status in West Virginia. [Note: The Logging Sediment Control Act of West Virginia (1992) requires that each timbering operation in West Virginia be supervised by a certified logger. To become a certified logger, an individual is required to successfully complete training and pass a test for best management practices (a soil erosion prevention plan) and chain saw safety and possess a current first-aid card (1)].

There was no formal company written safety program or company, site, and task specific safety training. The employer did indicate that on-the-job training in the form of constructive guidance was used when necessary. The employer had no similar prior incidents or similar injuries for the past three years. In addition, the employer had not previously been cited by OSHA.

On March 24, 1998, the company was continuing its operation of selectively harvesting the 20- acre tract. The operation began at approximately 8:00 a.m. It was a clear and cool day. A total of four individuals were working the day of the incident. The owner was skidding and loading the felled trees while the employees (victim included) were cutting, limbing, and bucking. The owner had the responsibility of loading the truck which was located at the operation’s landing area. The landing area was clean, open, and level. The logging truck was typically loaded using the forked loader. Just prior to the incident, the victim had finished cutting for the day and was in the process of waiting for the owner at the landing area. Evidence suggests that he approached the logging truck, with the securing chain in hand, to begin the securing operation. The truck had been previously loaded three hours earlier, and the logs were stacked higher than the standards on the sides of the truck. It is unclear as to whether or not the victim tried to access and/or manipulate the load. At approximately 4:30 p.m., the operation’s owner, who was operating a dozer as a skidder, had just arrived at the landing area and noticed the victim and the chain lying on the ground. The victim was found face down (fetal position) next to the truck (see figure). It was reported that part of the chain was lying over his shoulder. Parallel to the victim and within three feet was a 12 foot log approximately 12 inches in diameter. The victim had experienced massive blunt chest trauma as a result of being struck by the falling log. The first responder (the owner/skidder) turned the victim on his back and began administering CPR. He then yelled for help at which time the other workers responded and at 4:43 p.m. called the local EMS. EMS transported the victim to a local hospital where he was pronounced dead. The coroner estimated the time from injury to death to be minutes.

Since there were no eyewitnesses, it remains unclear as to whether or not the victim disturbed the load which had remained intact for three hours prior to the incident. One possibility may be that the victim tried to climb the load in order to drape the securing chain over the load. The owner of the company indicated that the usual method of chain installation was from ground level. Workers would throw a weighted nylon rope over the load, tie the securing chain to the rope, and pull the chain over the load. Evidence suggests that, on the day of this incident, the victim did not use this method. Interviewed co-workers indicated that the victim had been seen on the top of loaded trucks in the past.

The medical examiner’s report listed the immediate cause of death as massive blunt chest trauma.

Discussion: In this incident, the victim approached a truck whose load was stacked higher than the vehicle’s stakes or standards. Loads which have logs resting above the truck’s stakes are inherently unstable. Stacking the load higher than the truck’s standards also by-passes the vehicle’s integral safety device (the standards). OSHA Regulation 29 CFR 1910.266(h)(6)(v) requires that the load shall be positioned to prevent slippage or loss during handling and transport. (2) Loading the truck within its safe limits would have prevented this incident by allowing the truck’s standards to prevent or arrest movement of logs.

Recommendation #2: Employers should ensure that stacked logs are secured immediately after the loading operation is complete.

Discussion: In this incident, the logging truck had been loaded approximately three hours prior to the incident itself. The fully-loaded truck had remained in the landing area with its load unsecured until the victim approached the vehicle. CFR 1910.266(h)(6)(iv) requires that each log be placed on a transport vehicle in an orderly manner and tightly secured.(2) Having secured the load at the time the loading operation was completed could have prevented this fatal injury from occurring. Securing the logs as soon as possible after loading shortens the duration of time that potential log movement and employee exposure can exist.

Recommendation #3: Employers should develop, implement, and enforce a written safety program which includes, but is not limited to, task specific safety procedures and worker training in hazard identification, avoidance, and control.

Discussion: The evaluation of tasks to be performed at the work site form the basis for the development, implementation, and enforcement of a safety program as well as task-specific safety procedures. The key elements of the program should include the communication of task-specific safe work practices and, at a minimum, training in hazard identification and the avoidance and abatement of these hazards. In this incident, the victim was fatally injured when he approached an unsafe operation (logs being stacked above the truck’s standards) using an unsafe method to accomplish a task (not utilizing the weighted nylon feed rope and perhaps climbing on the load). Training in the hazards associated with the work environment and task-specific safety procedures via a comprehensive safety program would have given the victim the knowledge necessary to recognize and avoid a hazardous situation and report it to the appropriate person within the company. CFR 1910.266(I)(3)(iii) requires that workers be trained in the recognition of safety and health hazards that are associated with their assigned job tasks, including the use of measures and work practices to prevent or control these hazards. (2)

Discussion: Conducting regular safety inspections of all logging operations by a company- appointed person, who has the ability to identify hazards and the authority to take prompt corrective action, will help ensure that established company safety procedures are being followed. In addition, scheduled and unscheduled inspections clearly demonstrate to the employees that the employer is committed to the safety program and to the prevention of occupational injury. In this situation, the competent person may have had the opportunity to recognize the hazard and take prompt corrective action thereby preventing the incident. 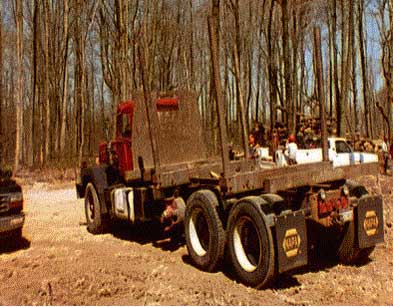 Figure : The above photograph shows the truck involved in the fatal incident. At the time of the incident, the load extended approximately one foot above the standards. Although this is not the exact location of the incident, the final relationship between the truck, victim, and fatal energy source are represented.

The WVU Center for Rural Emergency Medicine, through a contract with the West Virginia Department of Health and Human Resources, conducts investigations on the causes of work- related fatalities within the state. The goal of this program is to prevent future fatal work-place injuries. West Virginia FACE intends to achieve this goal by identifying and studying the risk factors that contribute to work-place fatalities, by recommending intervention strategies, and by disseminating prevention information to employers, employees, trade associations, unions, equipment manufacturers, students, teachers, and others with an interest in work-place safety.