A 45-year-old male supervisor (the victim) for an excavation construction company was loading a Caterpillar D4 bulldozer to return it to the company shop when it slid sideways as he pulled it onto a flatbed trailer attached to a truck. The truck and trailer were parked with the right wheels on the sloped shoulder of the road, and the left wheels on the paved surface. Light rain was falling at the time of the incident, and the trailer was wet. The trailer was equipped with two metal and wood ramps that led from the ground to a wooden “beavertail” platform. (See Figure). After one unsuccessful attempt to drive the bulldozer onto the platform, the victim drove up the ramps and partway onto the platform. The tracks of the machine began to slide sideways towards the ditch, and off the trailer. He tried to jump out of the cab, but was pinned beneath the cab structure when it landed on top of him. The victim’s wife had accompanied him to the site on the weekend morning when the incident occurred, and witnessed the incident from the passenger seat of the truck cab. She flagged down a passing car to call for help. EMS responders arrived, and elevated the bulldozer with air bags and blocks to remove the victim’s body. The victim was pronounced dead at the scene by the medical examiner. The FACE investigator concluded that, to prevent similar occurrences, employers and bulldozer operators should:

On July 17, 1999, a 45-year-old male excavation construction supervisor died while trying to load a bulldozer on a flatbed trailer. The Wisconsin FACE field investigator learned of the incident through the newspaper article on July 19, 1999. On September 22, 1999, the field investigator conducted a site visit. The FACE investigator also obtained the death certificate and the coroner and sheriff’s reports.

The victim was employed by the excavation company as a supervisor. He had at least ten years of experience in operating heavy equipment, including the bulldozer, and also had a commercial driver’s license to operate a tractor trailer.

The incident occurred early on a Saturday morning, when the rest of the company crew was not working at the site. The company had finished its work of installing a gravel driveway at a residence on Friday, but left the bulldozer at the site to be picked up the next day. The victim’s wife accompanied him in the truck with flatbed trailer to pick up and return the bulldozer to the company shop. He parked the truck and trailer across the two-lane road from the driveway, with the left wheels on the road and the right wheels on the shoulder. There was a slight downhill grade on the shoulder to the ditch. Light rain was falling, but the shoulder and surrounding areas were firm. The flatbed of the tandem axle dual wheel trailer was 20 feet long, 8 feet wide, with a 5-foot angled “beavertail” at the rear. Two 5-foot long, drop-down ramps extended from the end of the beavertail; these were 22½ inches wide, and could be set at positions across the end of the beavertail by sliding on a horizontal rod. The bulldozer width on the ground was 6 feet 5 inches; each track was 18 inches wide.

The wife waited in the passenger seat of the truck while the victim began loading the bulldozer. She was able to observe his activities from the rearview mirror of the truck. She saw him drive the bulldozer partway onto the trailer, then back down the ramps after it began to slide sideways. On his second attempt, the victim drove up the ramps and partway onto the platform. The tracks of the machine began to slide sideways towards the ditch, and off the trailer. He tried to jump out of the cab, but was pinned beneath the cab structure when it landed on top of him. The wife witnessed the incident from the passenger seat of the truck cab. She flagged down a passing car to call for help. EMS responders arrived, and elevated the bulldozer with air bags and blocks to remove the victim’s body. Responders noted the unfastened seatbelt dangling from the seat. The victim was pronounced dead at the scene by the medical examiner.

The death certificate listed the cause of death as crushing chest injuries due to a bulldozer rollover.

Discussion: The bulldozer in this incident was manufactured with ROPS and a seat belt, and this equipment was in working condition at the time of the incident. Manufacturer’s instructions include fastening the seatbelt whenever the machine is operated. Apparently, the seatbelt was not fastened when the bulldozer slid off the trailer and the victim attempted to jump from the operator’s seat. He was pinned under the ROPS frame. His death might have been prevented if his seatbelt had been fastened. Seat interlock devices allow equipment to be started only when the operator is seated and the operator is restrained by a seatbelt, safety bar, or other restraining device.

Recommendation #2: Bulldozer operators should evaluate the terrain prior to loading track equipment onto a trailer, and plan safe strategies for addressing the hazards.

Discussion: When positioning a trailer to load a bulldozer, operators should evaluate the slope of the parking surface and choose a level place to park. In addition, wet surfaces may cause equipment to slide more easily than dry. This incident might have been prevented if the trailer had been parked completely on the flat, paved surface of the road.

Recommendation #3: Employers should arrange for a qualified observer to provide verbal or signal directions when employees are loading track equipment onto a trailer.

Discussion: A bulldozer operator’s field of vision may be obstructed by loader buckets or other machine parts. A standby observer could provide verbal or signal directions to the operator about safe positioning on the loading ramps. In this case, the operator was the only employee at the worksite, and proceeded to load the bulldozer without the assistance of an qualified observer. 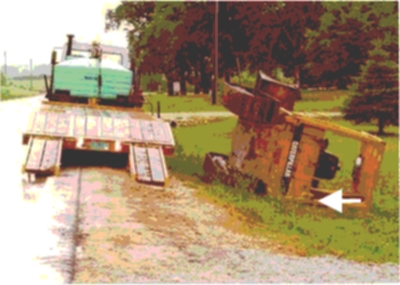