On March 20, 2001, a 41-year-old warehouseman at a steel cutting plant was crushed to death between two rolls of coiled steel. The victim worked at a plant that cut coils of sheet steel into individual sheets. The steel was delivered to the plant in large coils that ranged in weight from 5,000 to 40,000 pounds and stacked in long rows on the plant floor. A 20-ton capacity overhead crane was used to move the steel inside the plant. On this day, the victim was using the crane to lift a coil that had been stacked three high. As he lifted the coil, the movement apparently dislodged one or more neighboring coils, causing one 10,000-pound coil to slip forward off the row and pin the victim against a row of coils behind him. NJ FACE investigators concluded that, to prevent similar incidents in the future, these safety guidelines should be followed:

On March 20, 2001, a NJ FACE investigator was called by a federal OSHA safety supervisor who was at the site of an industrial fatality that occurred earlier that morning. The FACE investigator immediately reported to the site of the incident and observed the extrication of the victim. The investigator informally spoke with company representatives and the OSHA supervisor during this visit. On March 26, 2001, a second site visit was done concurrently with OSHA to interview the employer and witnesses. Additional information was obtained from federal OSHA, the police report, and the medical examiner’s report.

The victim’s employer was a steel cutting plant that had incorporated in 1982. Based in Pennsylvania, the company operated a plant in New Jersey that had been in operation since 1991.

The company employed 43 non-unionized workers, nine of whom were at the plant when the incident occurred. Training was primarily on-the-job and the company supported a forklift training program as per OSHA requirements. Company safety practices were outlined in a brief written program and safety meetings were held once a month.

The victim was a 41-year-old male warehouseman who had worked for the company for one month. The victim had worked for 15 years with a competing steel company and had extensive experience with the processes and machines at the plant. A Vietnamese immigrant, co-workers stated that he spoke English well enough to be understood without an interpreter. He was married with three children.

The victim’s employer was a company that specialized in buying and selling galvanized sheet steel. The company’s main facility was a warehouse and production plant located in an urban area. Steel was purchased as rolls of coiled sheet steel that would be sold individually or cut at the plant into single sheets. The plant cut the steel sheets but did not weld or otherwise fabricate the steel into products. The company’s main customers were companies that manufactured heating ducts and similar products from the sheet steel.

Production started with the delivery of coiled sheet steel that was trucked into the warehouse. Each coil varied in width, diameter, gauge, and weight, but all had a hole in the center to allow for the use of a lifting device to move the coil. Many of the coils were wrapped in plastic or coated with light oil to protect them from moisture. The coils were unloaded with a 20-ton capacity overhead hoist that traveled the length of the 28,000 square-foot warehouse. A worker operated the crane from the plant floor with a pendant controller and would walk with the crane as it moved across the warehouse. Once the crane was in position, the worker used a second pendant controller to operate a motorized two-sided coil lifter attached to the crane line. This lifter grabbed the coil from the sides using a device that hooked the coil horizontally through its center hole (see photo 1). All coils were handled and stored in the horizontal position. After unloading, the coils were placed in rows by the width of the coil. Each of the five 400 foot-long rows was stacked two to three high depending on the size of the coils, with each row separated by a narrow aisle measuring between 15 to 29 inches wide. To prevent the stacked coils from rolling apart, the two end coils in each row were chained together and chocked with 2-by-4 inch wood boards. When a coil was needed, a worker would bring the crane to the coil, lift it out of the row, and bring it down to the “level line” machine. This machine unrolled the coil, leveled out the residual bend of the coiled steel, and cut the steel into individual sheets. The sheets were stacked on pallets that were moved with the smaller two or six-ton capacity overhead cranes at the plant. The company cut seven to ten coils per day in two eight-hour shifts. 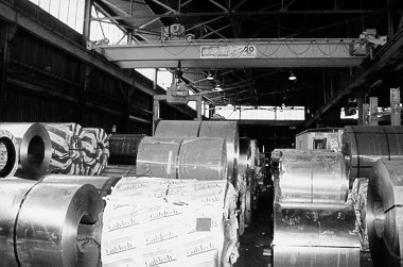 The incident occurred on the morning of Tuesday, March 20, 2001. On this day, the victim arrived for his usual work shift of 5:00 a.m. to 1:30 p.m. The early morning passed uneventfully as the victim “dug-out” coils and brought them to the level line machine. There were no witnesses to the incident. The victim was last seen shortly before 9:00 a.m. when he spoke briefly with a co-worker before returning to the crane. He was working in a 25-inch-wide aisle, facing a row of coils stacked three high and with his back to a row stacked two high. Circumstances suggest that he was operating the crane with the pendant controller to lift a coil from a row of coils that were wrapped in plastic. He had just lifted a coil when the neighboring stacked coils in the row shifted. A 10,150-pound coil apparently slipped into a space between the coils under it, causing it to slide off the row and against the victim who was standing in front of it. The coil struck him in the chest, crushing him against the row of coils behind him. 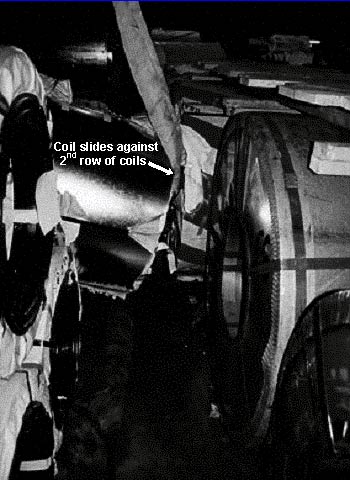 Photo 2. Position of coils following extrication of the victim

A few minutes after speaking with the victim, the co-worker noticed that the crane had stopped moving and went to check on him. He looked down the narrow aisle between the rows and found the victim pinned between the coils, only a few feet from the crane which held a partly raised coil. He immediately went to the nearby office for help. Other workers checked on the victim and found that he did not have a pulse. They then unsuccessfully tried to free the victim by removing the nearby coils with the crane. The police and EMS arrived and determined that he had died of his injuries. Rescue attempts ended and attention was turned to safely extricating the victim’s body. Workers from a nearby steel company were asked to operate the crane since the victim’s co-workers were too upset to assist. Over the next three hours, the coils near the victim were carefully removed until he was finally freed. He was transported to the local hospital where he was officially pronounced dead at 1:57 p.m.

Recommendation #1: Employers should develop and implement a procedure for the stable storage of steel coils.

Discussion: It appears that the coil that crushed the victim slipped into a space between the two unchocked coils underneath it, causing it to slide off the row and against the victim. Witnesses state that this type of shifting occasionally occurred, especially with the more slippery plastic-covered coils. NJ FACE investigators recommend that the company develop a procedure for the safe storage of steel coils. The attached information sheet, Safety Guidelines for the Stacking and Storage of Steel Coils 1, gives basic instructions for safely storing and chocking coils. These recommendations include:

The second attached publication from SafetyLine Online 2, gives a design for a steel “cradle” that supports the coil as it rests on the floor and allows a forklift to pick up and move the coil. It should be noted that the company and now uses similar wooden cradles and has adopted some of the Australian safety practices for handling steel coils.

Discussion: The aisle where the victim was standing was 25 inches wide, a few inches narrower than the 28 inches required under OSHA standards. It is not known if the additional aisle width would have saved the victim’s life, but it would have given him more room to move out of harm’s way. It should be noted that the company went beyond the OSHA requirement by increasing the aisle width to 36 inches.

Discussion: It is extremely important that employers obtain accurate information on safety and applicable OSHA standards. The following sources of information may be helpful:

Federal OSHA will provide information on safety and health standards on request. OSHA has several offices in New Jersey that cover the following areas:

Some useful internet sites for occupational safety and health information:

www.osha.govexternal icon — The US Department of Labor OSHA website.

Staff members of the New Jersey Department of Health and Senior Services, Occupational Health Service, perform FACE investigations when there is a report of a targeted work-related fatal injury. The goal of the FACE Program is to prevent future incidents by studying and identifying the risk factors that contribute to workplace fatalities, by recommending intervention strategies, and by disseminating information to employers and employees. NJ FACE data is reported to NIOSH for trend analysis on a national basis. All identifiers are removed from the FACE reports and other data to protect the confidentiality of those who participate in the program.