On September 16, 2000, a 16-year-old male golf bag room attendant (the victim) was fatally injured while operating a golf cart. The victim was driving a golf cart at work and struck a section of a deck that had been built over a pathway. The impact of the golf cart against the deck sheared off the steering wheel. The golf cart continued forward, and the victim’s chest was crushed by the deck. Co-workers heard the crash and the victim’s call for help and went to assist him. A call was placed for emergency assistance that arrived within minutes and transported the victim to an area hospital where he was pronounced dead. The Massachusetts FACE Program concluded that to prevent similar occurrences in the future, employers who hire minors should:

In addition, golf cart manufacturers should:

On September 17, 2000, the Massachusetts FACE Program was notified by the local media, that on Saturday, September 16, 2000, a 16-year-old male employee of a private country club was fatally injured while operating a golf cart that struck a section of a deck. An investigation was immediately initiated. On September 22, 2000, the Massachusetts FACE Program Director and an investigator traveled to the private country club where the club’s manager was interviewed. The police report, death certificate, OSHA fatality/catastrophe report, and photographs were obtained during the course of the investigation.

The employer, a local private country club, was in business approximately 86 years at the time of the incident. The number of people the country club employed varied with the season. In the warmer months the club employed anywhere from 120 – 140 workers. Of these employees, 20 – 30 of them typically were under 18 years of age. During the colder months, total employment decreased to a range of 20 – 40 employees, and no employees under 18 years of age were employed. The club also used temporary workers to supplement their staff while hosting large parties or weddings.

The victim, who had his drivers learning permit, had been employed with the company for approximately one month at the time of his death. His training was primarily on-the-job with some hands on training with golf carts. There were approximately 13 employees including the victim that were under 18-years-old and worked as golf bag room attendants. The country club’s handbook contained general written procedures for each position; these procedures did not include specific techniques on how required tasks should be completed. There was no designated safety representative at the country club.

The country club was private and had only male members, who, at the time of joining, purchased shares of the country club becoming part owners. In addition to the 375 male members, approximately 950 individuals, including the members’ wives and children, had access to the club facilities.

Golf was offered at the club May through October, the warmer six months of the year. During these warmer months, the country club employed many part-time workers, including high school students and college students. In September and October, when college students returned to school, the number of employees under 18 years of age increased. After October, the golf course section of the country club closed down for winter and the number of employees under 18 years of age decreased to zero. Typical jobs held by employees under 18 year of age included: golf bag room attendants, snack bar attendants, pool area attendants, and lifeguards. The victim had been employed as a golf bag room attendant for one month prior to his death. His responsibilities included: cleaning members bags and clubs after use, collecting and cleaning range balls, moving golf club bags into and out of golf carts, keeping the golf cart parking area clean and uncongested, cleaning the golf carts after use, and assisting the pro shop personnel.

All employees attended an orientation prior to starting work at the country club. The orientation was geared towards how employees should act around and treat the members of the country club. The golf bag room attendants did receive some on-the-job training for the various tasks listed above and they were shown how to operate golf carts before they were allowed to drive them. The golf cart training consisted of taking employees to an onsite empty parking lot where they were shown how to operate them. The country club allowed all employees, with at least a driver’s learning permit, to operate the golf carts. Reportedly, the club had an unwritten rule that if any employee were caught driving recklessly or in an improper manner they would be fired immediately.

The golf cart involved in the incident was one of approximately 75 golf carts the country club owned. The golf carts were four wheeled, two passenger, 36-volt battery operated, rear wheel drive vehicles. They could move in both forward and reverse directions and were equipped with backup alarms. A direction control lever used to switch the golf cart from the forward to reverse directions was located on the lower section of the seat by the operator’s lower right leg (Figure1). This location made the control lever difficult to see and access. Each golf cart was equipped with a parking brake/hill brake, which, when engaged, locked the brake pedal in a downward position. To release the brake, the operator had to apply enough pressure to the gas pedal to “pop” the brake off. Although the majority of the golf carts at the club had canopies, the golf cart the victim was using was not equipped with a canopy. The canopies’ main function was not structural but to shade the operators from the sun.

The day of the incident, was one of the club’s busiest days of the year. The country club was holding two tournaments, one in the morning and one in the afternoon. Each member had invited guests to the tournament, greatly increasing the number of individuals playing golf that Saturday.

The procedure for manually collecting balls involved selecting a golf cart and driving over to the practice area located, approximately several hundred feet away from the golf bag room. The employee would then walk around the practice area collecting golf balls with the handheld ball collector, a handheld cylindrical tool approximately three inches in diameter and four feet long. Once the ball collector was full, the balls would be emptied into buckets. The filled buckets would be brought back to the bag room via the golf cart and then the balls would be washed.

Because the incident was not witnessed, what exactly happened could not be determined. Investigating agencies identified two possible scenarios. Either the golf cart was parked and the victim was starting from a stopped position to go collect balls (scenario #1), or the victim was returning from collecting balls, and the golf cart was in motion just prior to the incident (scenario #2). In both scenarios, the golf cart involved in the incident had been the only one available for the victim to use and was or had been parked on the section of a paved pathway that was no longer in use. The pathway declined towards the building that housed the golf bag room and pro shop. A wooden deck had been built over the pathway and attached to building’s side approximately 10 years prior to the incident (Figure 2).

In scenario #2, the victim would have been driving the golf cart back to its parking location prior to the incident and drove into the deck. It is possible that the victim might have confused the gas pedal for the brake pedal.

In either scenario, the 16-year-old victim was allowed to operate golf carts at work. On the day of the incident, the golf cart the victim was operating crashed into the side of the wooden deck attached to the building that housed the golf bag room and pro shop. After sliding approximately three feet underneath the wooden deck, the golf cart struck the section of the deck where the floorboards are fastened to the joists severing the steering wheel from the steering column. The victim was pinned between the golf cart and the deck’s floorboards, crushing his chest.

The medical examiner listed the cause of death as blunt chest trauma.

Recommendation #1: Employers should establish and implement policies that prohibit workers less than 18 years of age from operating motor vehicles at work as required by the Massachusetts Child Labor laws.

Discussion: State and federal child labor laws are intended to protect working youth by prohibiting their employment under conditions that would be detrimental to their health or well being. These laws establish minimum ages for employment, limit the hours and times of day youth can work and prohibit employment of youth in certain jobs/tasks deemed as particularly hazardous for young workers.

Massachusetts Child Labor law prohibits workers less than 18 years of age in nonagricultural occupations from operating any motor vehicles, including golf carts, at work. (Massachusetts General Laws Part II Title XXI Chapter 149 Section 62). Employers should become familiar with and comply with the child labor laws. Specifically, they should establish policies to make certain that workers less than 18 years of age are not operating motor vehicles or performing other prohibited tasks and ensure that all supervisory staff as well as youth are trained in these policies. Signage on equipment indicating that it cannot be operated by persons less than 18 years of age and color coded name tags or work clothes indicating age of minors may be helpful in implementing these policies.

Reference and educational materials on child labor laws can be obtained by contacting either the Massachusetts Attorney General Office, Fair Labor and Business Practices Division, the U.S. Department of Labor’s, Wage and Hour Division (www.dol.gov/whd/External), or the Massachusetts Department of Public Health, Teens at Work: Injury Surveillance and Prevention Project. (Link Updated 3/20/2013)

Recommendation #2: Employers of minors should systematically review tasks that workers less than 18 years of age are assigned and modify task assignments as indicated to reduce exposure to safety hazards and comply with the child labor laws.

Discussion: Private country clubs are just one of a number of industries that rely heavily on workers less than 18 years of age to fill their seasonal and part-time staffing needs. Employers of minors should systematically review that tasks that young workers will perform and modify them as indicated to reduce exposure to safety hazards and assure compliance with child labor laws.

Recommendation #3: Employer should develop and enforce a comprehensive health and safety program which includes specific provisions for young workers.

It has been reported that 80 percent of occupational injuries to young workers occurred when no supervisor was present. In addition, there is evidence that young workers have a higher rate of occupational injuries than more experienced older workers. Employers who hire workers less than 18 years of age should include provisions addressing young workers in their health and safety program. These provisions should address but not be limited to policies and procedures to assure compliance with child labor laws, worker and supervisor training, and adequate supervision.

Recommendation #4: Manufacturers of golf carts should consider moving the direction control lever to the dashboard so that it is clearly visible and accessible to the operator.

Discussion: Golf carts manufacturers should consider moving the forward and reverse direction control lever to a location that the operator can easily access and clearly see the direction in which the lever is engaged prior to and while operating.

Retrofitting existing golf carts should also be considered. For example, an indicator light might be placed on the dash to inform the operator about the direction the golf cart is engaged in. 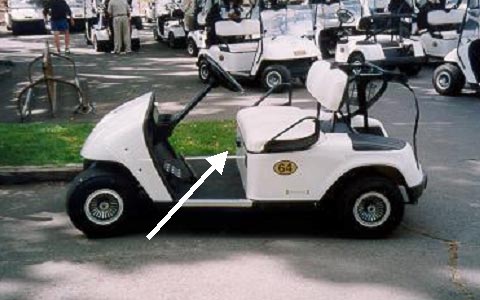 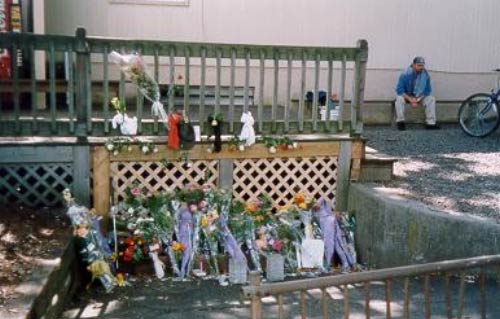 Figure 2 – Section of the deck the golf cart struck