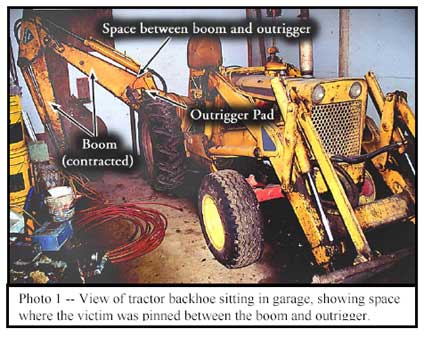 In May 1999, a 75-year-old owner of a well-drilling business was killed while servicing a company tractor backhoe. The victim and his employee were performing routine maintenance on the machine, tightening a large nut, which connects the backhoe boom to main tractor frame. The boom was extended straight out to the back of the machine. The victim was standing on the ground behind the tractor next to the boom. The tractor was running, and the hydraulics of the backhoe were connected and operational. When the victim apparently reached for a wrench, he accidentally leaned on the foot pedal which operates the boom sideways movement. The extended boom immediately swung towards the operator, crushing him against the raised outrigger. The other worker was preparing to grease the bucket joints at the time, and was not injured. The victim died shortly after from crushing injuries to the chest.

In May, 1999, a 75-year-old male owner of a well-drilling business was killed while servicing a company tractor backhoe. The Iowa FACE Program was notified of this incident several months later, and began an investigation. Information was gathered from the County Sheriff, the medical examiner, an eyewitness and employee who worked for the victim, and the victim’s wife, who allowed us to photograph the machine in a garage where it was stored.

The victim was a self-employed well driller, and had one hired employee. He had been in the well-drilling business his entire working life, and offered complete private well service for farmers and rural residents. This was a year-round business. The employee had known the victim as a friend and employer for the past 10 years. He could not remember any previous accidents or close calls on-the-job. The employee was hired to assist the victim in various well-drilling tasks. The owner (victim) operated all machinery, including the tractor backhoe. There were no safety programs or written policies in place for this small business.

The victim and his employee were doing routine maintenance on a tractor backhoe that was owned by the victim’s well-drilling business (see Photo 1). This tractor was equipped with a front-end loader and a backhoe, both powered by the tractor hydraulics. The tractor seat was designed to swivel from the forward facing position to the backward position for backhoe operation. The machine was over 20 years old, and had been purchased used several years prior to the incident. It was still in relatively good operating condition, and was used regularly for well-drilling work.

Photograph 2 shows the foot pedals on each side of the hydraulic hand lever column. The pedals control the left and right lateral movements of the boom. Hydraulic hand levers control up and down movement of the boom, as well as in, out, and tilt movements of the bucket. Other hand controls operate the left and right outriggers, which were both raised at the time of the incident. Prior to the maintenance work, the victim started the engine while sitting in the tractor seat. The key was located under the steering wheel on the right side. There was a safety interlock switch built into the transmission, preventing starting unless the transmission was in neutral position, and the clutch pedal was pushed in. He then extended the boom out to the back in the center position. The engine was left running during maintenance. 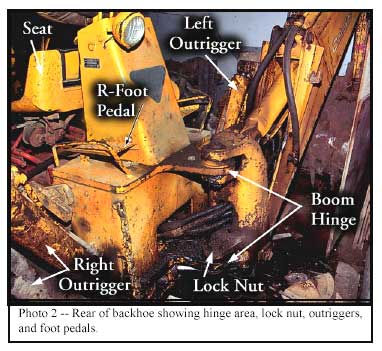 The employee was planning to grease joints on the backhoe bucket, and the victim was to tighten the large lower nut that secures the lower half of the boom hinge to the backhoe frame, which connects to the rear of the tractor (see Photo 2). This 2″ (50 mm) nut would work itself loose and needed minor tightening about once a month. This large nut was a slotted lock nut (see Photo 3), normally held tight with a large cotter pin through the bolt. The employee mentioned that a cotter pin was never used, possibly because the hole in the bolt was plugged. 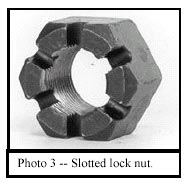 The victim was standing behind the tractor on the right side of the loader (from backhoe seat position). It appeared that he was preparing to test or tighten the nut. He reached towards the seat, apparently for the socket wrench which was usually stored in a toolbox under the seat. While reaching towards the seat, he accidentally leaned his arm on the right foot pedal, and the boom immediately swung in his direction, crushing him against the right outrigger, which was in its raised position. Emergency crews arrived within minutes, and the man was air-lifted to a local hospital, but his chest injuries were severe, and he died an hour later. The employee who was greasing the bucket joints at that time was uninjured.

The victim was taking medication (unknown type) for pain on the day of his death. This may have affected his movements and reaction time, however the employee did not recall anything abnormal about the victim’s alertness, level of energy, or ability to work.

The official cause of death from the Medical Examiner’s report was, “Asphyxia from chest compression”. No autopsy was performed.

Recommendation #1 Machines should not be serviced while the engine is running.

Discussion: Leaving the engine running during maintenance is a common cause of injuries, and owner’s manuals and safety instructions frequently warn about this hazardous practice. Only in rare cases is it necessary to leave the engine running while adjusting the machine. Bad battery, discomfort from frequent mounting and dismounting, or perceived time savings may be reasons to ignore this well-known rule and leave the engine running. In this case the tractor had a good battery and started easily. The victim and his employee were both older workers, and they may have wanted to avoid climbing to the operators seat if it could be avoided. The location of the ignition key and the transmission interlock required that the operator was in the seat for starting. These safety features have been designed to avoid starting the tractor while standing on the ground, which has been a common cause of run-over injuries.

It is not known exactly how the victim got into contact with the pedal controlling the boom sideways movement. He may have pushed it accidentally while reaching for the wrench, or he may have slipped or lost his balance. The pedal had to be pressed for less than a second for the boom to move from the middle position to the side. It is not clear whether his reaction time played a role in this incident. The movements of the boom are rapid, and the accidental pressing of the pedal caused the operator to be pinned in a very short time. One possibility, although unlikely, is that the operator intended to move the boom to the other direction to gain better access to the bolt, but touched the wrong pedal. It is clear that working in this position near the hydraulic controls is very hazardous when the machine is running. Potential movements of the machine due to the running engine also endangered the other worker who was preparing to grease joints at the bucket end. As a rule, the engine should be turned off for maintenance, and this could have prevented the fatal injury in this case.

Recommendation #2 Machines should be maintained in safe condition to avoid malfunctions and increased maintenance.

Discussion: The nut holding the boom to the loader frame would frequently work itself loose, requiring periodic tightening. This large slotted nut had pathways cut to accommodate a cotter pin going through the end of the bolt. These lock nuts are frequently used in situations where the nut may work loose. These situations may include wet, muddy, or icy environments, frequently moving machine parts, and parts receiving frequent shocks. Cotter pins may become rusted or break, making replacement difficult without re-drilling. We were not able to observe whether the cutter pin hole was usable for the cotter pin. The employee mentioned that instead of using a cotter pin, the nut was frequently tightened as part of regular maintenance. Proper replacement of broken machine parts, such as a cotter pin, is important in reducing machine malfunctions and unnecessary maintenance.

FACE is an occupational fatality investigation and surveillance program of the National Institute for Occupational Safety and Health (NIOSH). In the state of Iowa, The University of Iowa, in conjunction with the Iowa Department of Public Health carries out the FACE program. The NIOSH head office in Morgantown, West Virginia, carries out an intramural FACE program and funds state-based programs in Alaska, California, Iowa, Kentucky, Massachusetts, Michigan, Minnesota, Nebraska, New Jersey, New York, Oklahoma, Oregon, Washington, West Virginia, and Wisconsin.