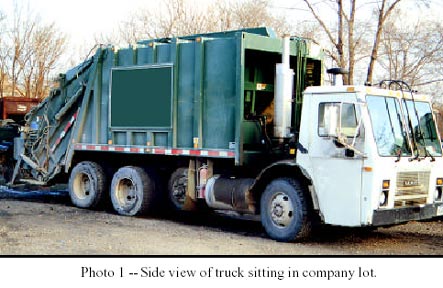 A 19-year-old man was killed while riding on the back of a garbage truck. The driver and his helper were collecting garbage on their normal route through a residential mobile home park. The victim was a relative of the helper, and was allowed by the driver and helper to ride along. He was not employed by the waste collection company, but was simply volunteering to help his friends on their normal pick-up route. This was against company safety rules, and company management was not aware of this arrangement. While moving from one residence to the next, the helper was standing and riding at his normal working position on the right rear side of the truck. Before the incident occurred, the victim was standing on the kicker bar at the rear of the truck, out of sight from the driver. While backing up to turn around, the victim slipped off the kicker bar and hit his head as he fell, knocking himself unconscious. The helper immediately yelled for the driver to stop, but not before the man had been run over by the dual tires of the truck, which killed him instantly. Both the driver and his helper were fired from their positions.

In the spring of 2001, a 19-year-old man was killed while helping his friends collect garbage on their normal residential route. The Iowa FACE program was notified of the incident a few days later from a newspaper article, and began an investigation. Information was gathered from the local police, OSHA, and from the district manager of the company. The victim was not employed by the waste collection company at the time of his death, nor was he hired by his friends to help them, but was simply volunteering during his free time. This incident may not be occupational in a strict sense, yet has clear value for prevention. Two Iowa FACE investigators conducted a site visit in the fall of 2001, interviewed the company manager, and photographed the truck involved in this death.

The waste handling company was a large national corporation, which had been in business for the past 50 years. This locally owned regional office was established three years ago, and serviced a 15-mile radius with 17 trucks and 26 employees. The driver had 15 years experience and the helper had 5 years experience with this company, both usually working as a team. Their route would take 6-10 hours to complete. The victim had no experience with this company.

The company had a comprehensive written safety and training program for all employees, compliant with OSHA requirements. This included orientation and annual retraining on specific hazards related to this type of work, including strong warning against allowing unauthorized riders on trucks. Every six months, drivers were observed and evaluated for their performance. Any confirmed incident of allowing extra riders has resulted in immediate termination of employment. Each driver is responsible for not allowing unauthorized riders on his truck. 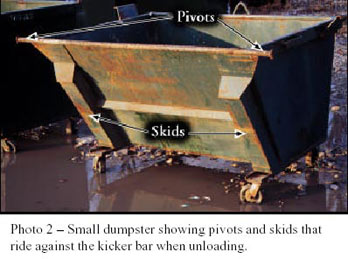 The driver and his helper were on their normal residential route driving through a mobile home park. The helper was riding on the right, rear side of the truck, visible to the driver through his right side mirror. He was standing on a secure platform, which was designed into the truck. In Iowa, helpers can legally ride while standing, if the truck is traveling 13 km/h (8 MPH) or less, or if there is 30 meters (100 feet) or less between stops. The victim was standing on the kicker bar and hanging on to the top edge of the hopper, completely out of sight from the driver. The driver was backing up the truck to turn around when the victim suddenly slipped off the kicker bar, and evidently hit his head on the way down. Bystanders said the victim never moved once he hit the ground. The helper immediately yelled for the driver to stop, but the driver could not stop in time, and the extra rider was run over by the right dual tires of the truck and killed instantly. 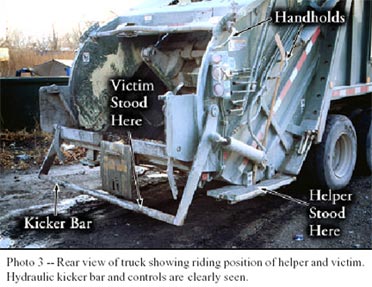 The manager of the mobile home park immediately called 911, but it was obvious that nothing could be done. The man was still under the truck when emergency crews arrived. The truck was impounded and the driver and his helper were fired for breaking company rules. These rules state: 1.) There shall be no unauthorized riders on the truck at any time, 2.) No standing riders are allowed on the truck when backing up, 3.) The helper must assist the driver when backing up, 4.) The helper must be in eye contact with the driver while backing up.

The truck had decals warning against falling off the truck as seen on Photo 4. After the incident, the truck was found to be in operable condition and was put back to service. 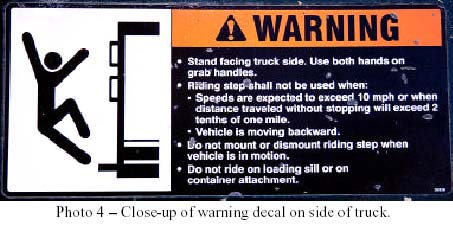 The cause of death taken from the Medical Examiner’s report is, “cardiac laceration due to pedestrian / truck accident.” An autopsy was performed.

Discussion: The waste collection company had clear rules about having extra riders, but driver and his helper ignored this policy. Waste collection work requires a well-trained team with clear roles, responsibilities, and communication between workers. Extra riders are not trained, and add an extra risk for the operation. In this case, the victim fell off the truck while backing up, and was out-of-sight from the driver. The driver had no chance to stop in time after the fall, although the helper noticed him fall, and yelled for the driver to stop.

Recommendation #2 No individual should ride on the rear of a garbage truck while it is backing up. Also, helpers must assist drivers when backing up.

Discussion: All commercial trucks should follow this rule, as there is great danger in being out of the driver’s view. Even if assisted, as in this case, it may be impossible for the driver to stop in time and avoid running over a person who has fallen off the truck. This company has a safety policy that backing up is permitted only when necessary, and then, at no more than 6-8 km/h (4-5 mph). In the waste collection business, most insurance claims are for accidents while backing up, usually for vehicular and/or property damage. On commercial routes, backing up to larger containers is required, but on residential routes, it should be avoided whenever possible.

Discussion: The company should have adequate means to train and observe the workers and ensure that the garbage collection workers follow company policies. It is not known whether having extra riders in this case was an isolated event, however, the company should have an effective enforcement mechanism in place to ensure that extra riders are not on trucks at any time. After this incident, the company added a new rule for the operators:
No one ever rides on the edge of the hopper (back end of the truck).

Recommendation #4 Manufacturers of garbage trucks and waste collection companies should consider using technologies to improve visibility to the back of the garbage truck.

Discussion: Video monitors, mirrors, or other means should be considered to improve a driver’s visibility to the back of a waste collection truck. It is not clear whether such devices would have prevented this incident, as the victim was given permission to ride on the truck. However, there are situations where the driver would greatly benefit from having a better view of the back of his truck. These situations might also improve working efficiency, and include, backing up, mechanical malfunctions, and picking up unusual, large, or odd shaped items.

FACE is an occupational fatality investigation and surveillance program of the National Institute for Occupational Safety and Health (NIOSH). In the state of Iowa, The University of Iowa, in conjunction with the Iowa Department of Public Health carries out the FACE program. The NIOSH head office in Morgantown, West Virginia, carries out an intramural FACE program and funds state based programs in Alaska, California, Iowa, Kentucky, Massachusetts, Michigan, Minnesota, Nebraska, New Jersey, New York, Oklahoma, Oregon, Washington, West Virginia, and Wisconsin.

The purpose of FACE is to identify all occupational fatalities in the participating states, conduct indepth investigations on specific types of fatalities, and make recommendations regarding prevention. NIOSH collects this information nationally and publishes reports and Alerts, which are disseminated widely to the involved industries. NIOSH FACE publications are available from the NIOSH Distribution Center (1-800-35NIOSH).