A 40-year-old male warehouse supervisor (the victim) died after being caught between a pallet stacking machine and a storage rack support at a cigarette manufacturing plant. The victim had been working alone at the finished goods warehouse on the 8 a.m. to 4 p.m. shift when the incident occurred. Although the incident was unwitnessed, evidence suggests that the victim may have been either removing loose spilled cigarettes from the floor, or checking the inventory in the storage bins, which was located alongside an aisle designated for travel of the pallet stacking machine. The victim, without the aid of specific safety procedures covering either of these activities, apparently had his back toward the approaching stacking machine. The machine, which was equipped with green illuminated travel lights and pressure-sensitive stop-bumpers-located on both the front and rear, but not on the sides-struck the victim and crushed him against a vertical 4-inch I-beam (storage rack support). The time of the incident was determined to be about 11:30 a.m.; the body was not discovered until 12:05 p.m. No revival efforts were attempted, and the victim was pronounced dead by the local medical examiner about 70 minutes after the body was found. NIOSH investigators concluded that, to prevent future similar occurrences, employers should:

On July 9, 1992, a 40-year-old male warehouse supervisor (the victim) died when he was struck by a pallet stacking machine and crushed against a storage rack support in a finished goods warehouse at a cigarette manufacturing plant. On August 21, 1992, officials of the Virginia Occupational Safety and Health Administration (VAOSHA) notified the Division of Safety Research (DSR) of this fatality, and requested technical assistance. On August 26, 1992, a safety specialist from DSR conducted an investigation of this incident. The investigator reviewed the incident with the company’s safety manager, and the VAOSHA compliance officer assigned to the case. Photographs of the incident site and the medical examiner’s report were obtained during the investigation.

The employer in this incident was a cigarette manufacturer and distributor that had been in operation for 70 years. The company employed about 1,000 workers at this plant, of whom 4 were warehouse supervisors. The company had a written safety policy and program containing safety procedures which were administered by the plant’s safety department personnel. The company held monthly safety meetings with company and labor representatives attending, and all department supervisors were responsible for safety within their departments. On-the-job and classroom training were provided to the employees. The victim had worked for this employer for 17 years, which included 6 years as a warehouse supervisor. This incident was the first fatality the company had experienced in 10 years.

On the day of the incident, the plant was in the second week of a shut-down phase, which required a significantly reduced number of employees. The victim had been working the 8 a.m. to 4 p.m. shift at the finished goods warehouse. The warehouse, which was 100-meters square by 18-meters high, was used to store cases of cigarette products awaiting shipment. The warehouse was arranged with nine aisles having storage bins on either side. Each aisle contained a computerized pallet stacking machine which could be operated automatically or manually. The machines traveled up and down the aisles retrieving cases of cigarettes and delivering them to a conveyor belt, where they were forwarded to the loading dock for shipment. The clearance between the storage bins’ vertical 4-inch I-beam supports and the stacking machine’s metal frame was approximately 7 inches. The stacking machine was approximately 17-feet 6-inches long by 50-inches wide and weighed 36,000 pounds. The travel speed was about 300-feet per minute or 3½-miles per hour as it traveled in an east and west direction between the storage bins. The stacking machine had green travel lights, mounted on both the front and rear sections, which were activated when the machine was in operation. Also, pressure-sensitive stop switches were installed in both the front and rear bumpers.

Although the incident was unwitnessed, evidence suggests that the victim had proceeded down aisle number 7 to an area around bin number 15 (Figure). At that area, the bin was arranged such that a person could stand in the bin area while the stacking machine passed by. The victim may have noticed that cigarettes had spilled out onto the floor and had stopped to pick them up; alternatively, he may have been in the area checking product inventory. At about 11:30 a.m., the victim apparently had his back turned toward the approaching stacking machine when it struck and crushed him between the stacking machine’s frame and a vertical 4-inch I-beam storage rack support. The body was dragged several feet until some part of the victim’s body contacted the bumper, causing the machine to stop. A co-worker traveling through the area noticed the body around 12:05 p.m. and activated the plant’s internal emergency response system. When emergency service personnel arrived, they determined that nothing could be done for the victim and contacted the medical examiner. The medical examiner arrived about 70 minutes after the incident and pronounced the victim dead at the scene.

The medical examiner’s report listed the cause of death as mechanical asphyxia due to crushing injuries to the chest.

Recommendation #1: Employers of warehousing operations should evaluate their current safety program and incorporate specific procedures and training that address all work to be performed within the aisles of the warehouse.

Discussion: The pallet stacking machine, which had the capability of being operated either automatically or manually, was equipped with a switch that could have been locked out prior to entry into the aisles. Specific safety procedures and training should include steps to be taken prior to any work being performed in the aisles. These should include locking and tagging the machine in the off position and retaining the key until all work is completed and the aisles are clear of personnel. Additionally, the procedures may include the use of two workers to perform any work in the aisles; one worker would be responsible for monitoring the movement of the machine while the other worker performs the task. In order for these procedures to be effective, they must be clearly communicated and fully understood by the affected employees and supervisors.

Recommendation #2: Employers should consider the installation of stationary travel warning lights and redesign of the stacking machine pressure-sensitive stop bumpers. 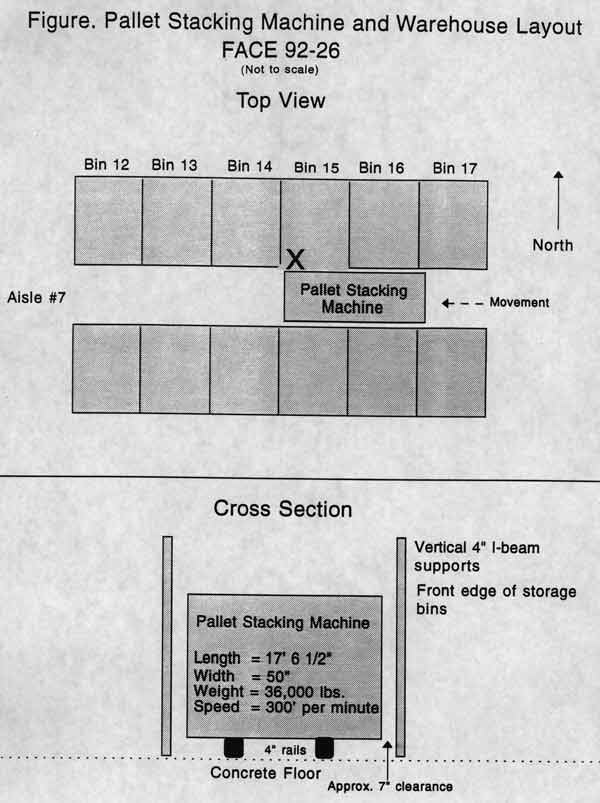