On October 5, 2002, a 37-year-old female Hispanic farm laborer (the victim) died after falling approximately 20 feet from the elevated forks of a forklift to a concrete barn floor. The victim was labeling bins of sweet potatoes that had been stacked five bins high in a curing barn. The victim stood on the forklift forks and was raised to the bottom of the top bin by her husband, the forklift operator. The operator heard his wife scream, then heard her hit the barn floor. He found his wife breathing but unresponsive. He carried the victim to a pickup truck and drove her to a nearby fire station. EMTs at the fire station transported the victim to the local hospital. She was later transported to a regional medical center where she died. NIOSH investigators concluded that, to help prevent similar occurrences, employers should

On October 5, 2002, a 37-year-old female Hispanic farm laborer (the victim) died after falling approximately 20 feet from the elevated forks of a forklift to a concrete barn floor. On October 15, 2002, officials of the North Carolina Occupational Safety and Health Administration (NCOSHA) notified the Division of Safety Research (DSR) of the incident. On November 13 and 14, 2002, a DSR safety specialist conducted an investigation of the incident. The incident was reviewed with the farm owner and personnel from the Agricultural Safety and Health Bureau of the North Carolina Department of Labor. The scene was photographed and a request was made for a copy of the coroner’s and medical examiner’s report.

The employer was a farm that had been in operation for approximately 30 years. Crops were produced on plots of land in various locations that totaled 2,600 acres. The farm’s primary crop was tobacco, but sweet potatoes, soy beans and cotton were also grown. The farm had five full-time employees and employed approximately 60 temporary workers during the sweet potato harvest season, which lasted 2 to 3 weeks. The employees hired during harvesting season were migrant Hispanic workers. A Spanish-speaking supervisor was responsible for assigning crews and explaining tasks to be performed during the day. The farm had no written safety and health program. Training was given on the job. Workers hired during the sweet potato harvest were shown a film in Spanish on chemical safety and basic safety procedures to be followed during the harvest. The victim had worked at the farm for 9 years. She worked a full-time, 56-hour week during the peak harvest season and part-time for the remainder of the year. The victim’s husband had worked at the farm full-time for 9 years and had operated the forklift during that time. The farm owner stated that the victim also had previous experience operating the forklift. This was the employer’s first fatality.

Sweet potatoes harvested on the various farm plots were placed in 40-bushel bins that had been loaded on a flat bed truck. The bins measured 42 inches wide by 36 inches high by 7 feet long. Once the bins were loaded, the potatoes were transported to a curing barn where they were placed for 5 days in elevated temperature and humidity. They were then cooled in the barn for 2 days at room temperature. Once cured, the potatoes were transported to processing centers by tractor trailers where they were boxed for retail sale.

On the day of the incident, a truckload of full sweet potato bins had been unloaded from a flatbed truck by forklift and set inside the curing barn. Because the victim, who was to label the bins before they were stacked in the barn, was late for work, the forklift operator (the victim’s husband) had begun to stack the unlabeled bins. When he finished stacking the bins and the victim arrived at work, it was decided that the victim would label the bins while standing on the forks of the forklift. The operator then raised her on the forks approximately 20 feet above the concrete barn floor to the bottom level of the top bin (Photo 1). No fall protection or platform was used. The operator said the victim then took off her shoes and threw them to the floor. As he was sitting in the forklift cab, he heard the victim scream, then the sound of her hitting the barn floor. He dismounted the forklift and went to the victim. He found her breathing but unresponsive. He carried the victim to a pickup truck and drove her approximately 5 miles to a fire station. An EMT at the station transported the victim by ambulance to the local hospital. The victim was later life flighted to a regional trauma center where she died during surgery. 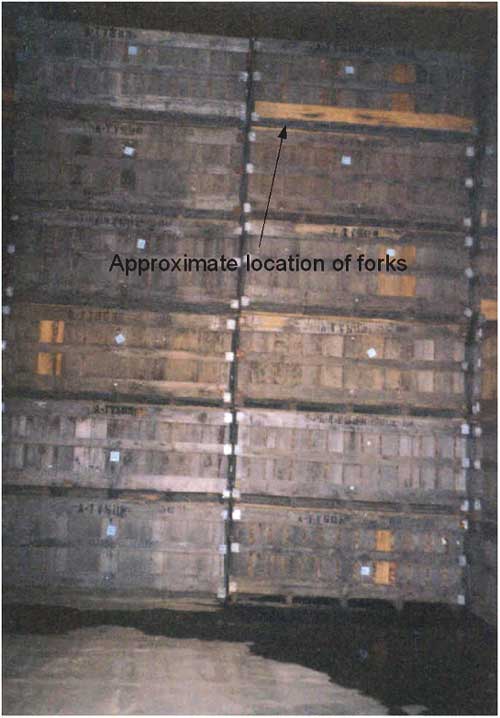 The official cause of death was not known at the time this report was written.

Recommendation 1: Employers should develop, implement, and enforce a comprehensive written safety program for all workers which includes training in hazard recognition and the avoidance of unsafe conditions. The comprehensive training plan should identify required specialized training, i.e., training for forklift operators.

Discussion: Although the forklift operator had operated the forklift on the farm for 9 years, he had never received structured training in the proper operation of a forklift. A comprehensive safety program should be developed for all workers that includes training in hazard recognition and the avoidance of unsafe conditions.

The employer should certify in writing and identify by name each operator that has been trained, the date of the training, the date of the evaluation, and the identity of the person(s) performing the training or evaluation. This training in forklift operation should be given by a person who has the knowledge, training, and experience necessary to train operators and should consist of a combination of formal instruction (i.e., lecture, discussion, interactive computer learning, videotape, written material), practical training (demonstrations performed by the trainer and practical exercises performed by the trainee), and evaluation of operator performance in the workplace. In the event a language barrier might exist, this training should be administered in the trainee’s primary language.

Discussion: The victim had been elevated on the forks of the forklift to label the bins. Additional workers stated during interviews with Agricultural Safety and Health Bureau personnel that workers had been elevated by this manner in the past. These workers were not available at the time of the NIOSH investigation. While not written, standard operating procedures at the farm were to label all bins before they were lifted into place by the forklift. Adherence to these procedures would greatly reduce worker exposure to fall hazards.