WARNING! Workers may be burned or electrocuted when using metal-reinforced hoses on aerial bucket trucks near energized power lines.

A 37-year-old electrical lineman who worked for a contractor recently died when he jumped from a burning aerial bucket and fell 35 feet to the ground [NIOSH 1990]. When the fatal incident occurred, the lineman was sagging (adjusting slack in) the center phase of a three-phase, 12,400-volt, energized power line. A metal-reinforced, rubber hydraulic hose was attached to an impact wrench the line man was using. When the hose simultaneously contacted two phases of the power line, the heat generated by the electric current in the metal reinforcement caused the hose to melt and rupture. When the hydraulic fluid from the ruptured hose contacted the power line, the fluid ignited and the aerial bucket became engulfed in flames. As the fluid continued to spray onto the power line, the fire intensified. The lineman rotated the aerial bucket away from the power line until the bucket controls stopped functioning. He then attempted to jump to an earthen bank about 15 feet from the side of the bucket, but he caught his foot on the bucket lip and fell to the ground, landing on his head and chest.

A field mechanic had installed the metal-reinforced hose 5 months before the fatal incident. During later interviews, the mechanic stated that he knew he was installing the wrong type of hose but did not understand the hazards involved [NIOSH 1990].

NIOSH is therefore concerned that workers at other utility companies or electrical contracting companies may be exposed to hazards from metal-reinforced hydraulic hoses.

OSHA standards require that all hydraulic tools used on or near energized power lines or equipment be supplied with nonconducting hoses having adequate strength for normal operating pressures [29 CFR* 1926.951(f)(3)].

As the case reported here demonstrates, electrical contact between two power line phases through a metal-reinforced hydraulic hose can generate sufficient heat to rupture the hose and cause a fire. In addition, an electrocution hazard can be created if a metal-reinforced hose on the boom of a truck contacts an energized power line and allows current to flow through the truck chassis.

NIOSH recommends that the following precautions be taken to control the hazards associated with hydraulic hoses used on aerial bucket trucks: 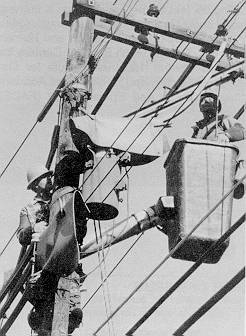 * Code of Federal Regulations. See CFR in references. [Return to body of text]