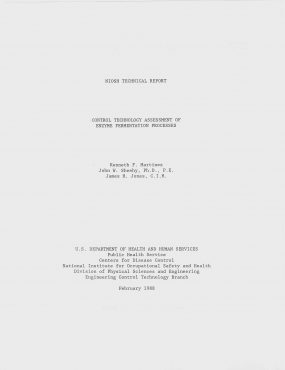 Walk through surveys were conducted at eight facilities to determine the effectiveness of control techniques used in biotechnology firms to reduce the hazards involved in enzyme fermentation processes. In depth surveys were conducted at three of these sites. Viable process microorganisms, enzymes, and total dust levels were studied in aerosol samples collected around potential emission sites such as laboratories, seed and fermentor tanks, and filtering operations. The concentration of microorganisms was highest around the filtering operations at two of the three facilities tested. The lower levels at the one site were due to inherently better containment characteristics of the drum filters. The use of double mechanical steam seals on agitator shafts appeared effective in controlling microbial cultures inside the seed and fermentor tanks. Packed seals showed some leakage. Exhaust gases from the seed and fermentor tanks were another major emission source of production microorganisms. Viable emissions from process exhaust gases were not likely to be completely controlled by the use of water scrubbers. Individual work practices helped to determine the effectiveness of the control methods. The authors conclude that this information could serve as a source for comparing the effectiveness of process equipment in other fermentation operations. The effectiveness of the controls evaluated may be inadequate if potentially hazardous organisms are used by industry.