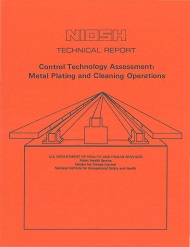 A survey of control technology of electroplating and cleaning operations in the metal plating industry (SIC-3471) was conducted. Walkthrough surveys were conducted at 30 facilities and in depth surveys at 8 installations. Control measures were evaluated primarily by collecting environmental samples at 64 plating and cleaning tanks and by measuring airflows around the tanks. The surveys concentrated on hard chromium (7440473) plating tanks, of which there were 31. Eight of the chromium tanks were ventilated only on one side. Eighteen were ventilated on two (opposite) sides and 5 had ventilation on three sides. Ventilation was effective in controlling worker exposure. The highest total chromium concentration was less than 2 percent of the OSHA standard, 0.1 milligram per cubic meter (mg/m3). Thirty nine of 47 sulfuric-acid (7664939) mist samples were below detectable limits; the remainder were below the OSHA standard of 1mg/m3. Covering the tanks also helped to reduce exposure. Worker exposures around cadmium (7440439), copper (7440508), nickel (7440020), silver (7440224), and zinc (7440666) plating tanks were also below existing and recommended standards. The authors conclude that ventilation of and covering of plating tanks effectively controls occupational exposures in electroplating operations.