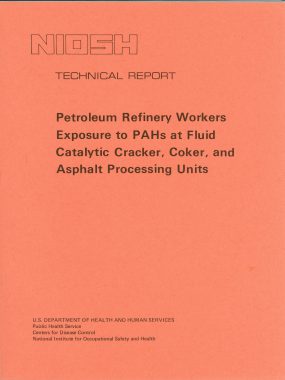 Due to growing concern in recent years based on cancer incidence data gathered in epidemiological studies of refinery workers, worker inhalation exposures to polyaromatic hydrocarbons (PAHs) were monitored at nine petroleum refineries using three different types of process units. At fluid catalytic cracking units (FCCUs) and delayed coker units both personal and area air samples were collected while at asphalt processing units, primarily area samples were collected for a total of over 250 samples. At the FCCUs and delayed coker units, workers were exposed to numerous PAHs, usually at low microgram per cubic meter (microg/m3) concentrations. The geometric mean of the cumulative PAH concentration exposures in personal samples was 11.4microg/m3 for the FCCUs and 11.1microg/m3 for the delayed coker units. The highest concentrations were of the light molecular weight compounds, 2 and 3 ring PAHs. Only small quantities of the heavier 4 through 7 ring compounds were found. This was significant as the carcinogenic properties of the heavier compounds were thought to be far greater than those of the lighter compounds. The production of sponge coke was associated with lower PAH levels than the production of the less common needle coke. At the FCCUs and the asphalt processing units, the PAHs collected were associated with the respirable fraction particulate and possibly with PAH vapor. At the delayed coker unit, up to 50 percent of the PAHs collected downwind were associated with particulates greater than 10 micrometers. No relationship was noted between tobacco smoking and PAH concentrations in the atmosphere at the refineries.