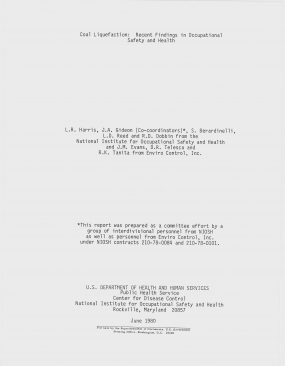 Two coal liquefaction pilot facilities were surveyed to determine worker exposure to low concentrations of polynuclear-aromatic- hydrocarbons (PNAs) and aromatic- amines. One facility used the donor solvent (DS) process and the other used the DS/catalytic hydrogenation (DS/CH) process. Area samples taken at the two facilities indicated the presence of 29 PNAs and benzene (71432), toluene (108883), xylene (1330207), aniline (62533), N,N- dimethylaniline (121697), 2,4-dimethylaniline (95681), p- nitroaniline (100016), o-toluidine (95534), o-anisidine (90040) and p-anisidine (104949). Total PNA exposure of workers was the sum of the concentration of the 29 PNAs. PNA exposure was greater for workers of the DS process. Of the PNAs, 97 percent were 2 and 3 ring PNAs and 3 percent were 4 and 5 ring PNAs. Exposure concentrations for field technicians at the DS facility were less than 0.02, 0.1, and 0.04 for benzene, toluene and xylene, respectively. Concentrations of aromatic amines were below OSHA standards. Total particulates ranged from 0.7 to 10 milligrams per cubic centimeter. Noise levels were below 85 to 90 decibels. The authors conclude that coal liquefaction materials contain potentially hazardous and biologically active substances many of which have not been characterized as to their composition and health effects.