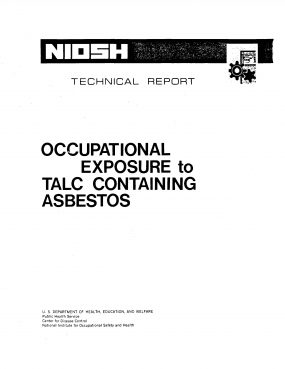 Mortality and morbidity patterns were studied among White male talc (14807966) millers and miners in upper New York state. The mortality study included 398 miners who began employment between 1947 and 1960. There was a significant increase in mortality due to bronchogenic cancer, nonmalignant respiratory disease excluding influenza and pneumonia, and respiratory tuberculosis. The average latency period for bronchogenic cancer was 20 years. The morbidity study included 156 current miners. Among those with more than 15 years of exposure, there was an increased prevalence of pleural thickening, reduced forced expiratory volume in 1 second, decreased forced vital capacity, and lower air flow rates. Talc samples from the mines were analyzed, and most contained tremolite (60649538), anthophyllite (17068789), chrysotile (12001295), antigorite (61076980), and lizardite (61026899), and traces of dolomite (16389881), calcite (13397267), and quartz (14808607). Time weighted average exposures to asbestiform amphiboles were in excess of present OSHA standards in many mine and mill operations, and more than 90 percent of the total airborne fibers were less than 5 microns in length. The authors conclude that exposures to the these talcs are associated with an increased risk of pleural thickening, pleural calcification, bronchogenic cancer, and nonmalignant respiratory disease.