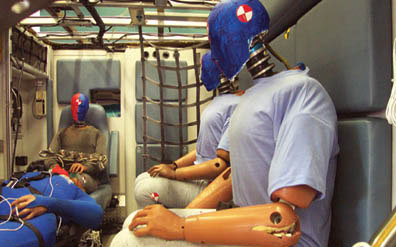 Transportation incidents are the leading cause of work-related deaths in the United States; between 2003 and 2009, an average of almost 1,300 U.S. workers died from roadway crashes each year. The risk is even greater for emergency medical services (EMS) personnel. In 2002 field investigators estimated that the fatality rate for EMS workers was more than 2 times the national average for all workers.2

As part of the National Occupational Research Agenda (NORA), researchers at the National Institute for Occupational Safety and Health (NIOSH) set out to reduce ambulance crash–related injuries and deaths among EMS workers. Research addressed the layout and structural integrity of ambulance compartments, design of hardware, and occupant restraints.

NIOSH research revealed a number of important factors involved in ambulance worker injuries and deaths. For example, field investigators observed that EMS workers often ride on the squad bench without wearing a restraint. This allows them to lean forward, stand up, or change positions as needed to reach the patient or equipment, but places them at higher risk of striking bulkheads, cabinets, shelves, or other occupants during a crash. NIOSH crash tests also revealed the possibility of head injury if a worker’s head strikes the cabinets immediately above or behind them, and noted that vehicle structural failures can be a contributing factor in adverse outcomes of EMS crashes.

In 2007 NIOSH partnered with the Ambulance Manufacturers Division of the National Truck Equipment Association (AMD-NTEA) and the General Services Administration (GSA) to revise the GSA ambulance purchase specification and the companion AMD-NTEA test standards. This included increasing the head clearance for EMS workers above the seating positions, eliminating a significant source of head injury. NIOSH also worked with AMD-NTEA to establish a new crash test methodology Technical Committee. The committee used NIOSH research to develop a cost-effective test procedure to evaluate how components (seats, cot, equipment mounts) in a patient compartment would withstand a 30 mph frontal impact. This test procedure was published by the Society of Automotive Engineers (SAE) in May of 2010 as a recommended practice, and is already being used within the industry to improve ambulance seating and restraints. The team has developed a companion document covering vehicle response in side impact events, which SAE is expected to publish in late Summer 2011. The long-term goal is to bring ambulance patient compartments up to the same level of safety found in passenger vehicles.

NIOSH researchers continue to work with AMD-NTEA, GSA, manufacturers, and federal agencies on other recommendations to improve occupational safety for EMS workers. Ongoing efforts include creating and validating individual standards for seating and worker restraints, litter and patient restraints, and equipment mounting. These research-to-practice measures and collaborative efforts will improve the safety of EMS crew members in their mission to save the lives of others.