Gastrointestinal illness can spread quickly in closed and semienclosed environments, such as cruise ships, but rates of AGE illness on passenger cruise ships have significantly decreased over time. 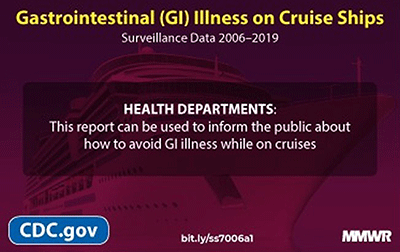 From 2006 through 2019, approximately 127 million passengers sailed on 252 cruise ships in the Vessel Sanitation Program’s (VSP) jurisdiction. The rate of AGE illness on cruise ships decreased during 2006-2019 for passengers and crew.

Ship size and voyage length are associated with AGE illness, and more targeted effort is needed to prevent unequal illness rates among passengers and crew.

Decreasing numbers of AGE outbreaks on cruise ships are likely a result of several factors: