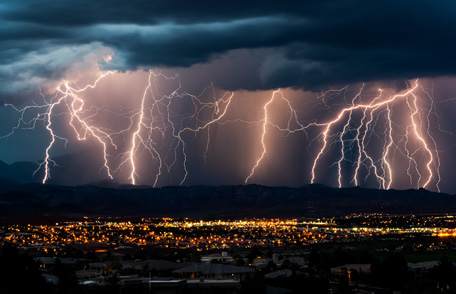 Learn how to protect yourself and your loved ones during a thunderstorm. Being outside when lightning is present is not something to take lightly—ever.

The weather forecast calls for a slight chance of thunderstorms, but you can only see a few fluffy white clouds overhead. So, you and your tennis partner grab your racquets and balls and head for the tennis court. You spend a few minutes warming up and then—wait! Is that thunder you hear? Was that a lightning flash?

What do you do? Keep playing until the thunder and lightning get closer? Go sit on the metal bench under the trees to see what happens? Or get in your car and drive home?

Correct answer: If no substantial, non-concrete shelter is nearby, get in your car and wait out the storm.

Why? Because being outside when lightning is present is not something to take lightly—ever.

Although the odds of being struck by lightning each year are less than 1 in a million, some factors can put you at greater risk. Lightning most often strikes people who work outside or engage in outdoor recreational activities. Regional and seasonal differences can also affect your risk of being injured by lightning.

In 2021, Florida had the most lightning deaths. Florida is considered the “lightning capital” of the country, with more than 2,000 lightning injuries over the past 50 years.

The consequences of lightning strikes are serious. From 2006 through 2021, lightning caused an average of 28 deaths per year in the United States.

Protect Yourself from Lightning Strikes 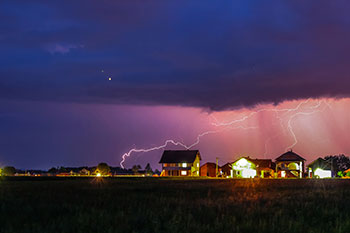 You can protect yourself from risk even if you are caught outdoors when lightning is close by.

Being indoors does not automatically protect you from lightning. In fact, about one-third of lightning-strike injuries occur indoors. Here are some tips to keep safe and reduce your risk of being struck by lightning while indoors.

Lightning strikes may be rare, but they still happen, and the risk of serious injury or death is severe. Take thunderstorms seriously. Learn and follow the above safety rules to keep yourself safe from lightning.