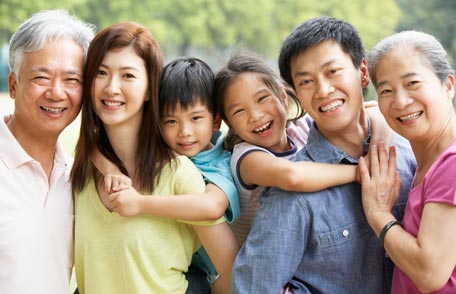 Learn about programs to improve the health of Asian American, Native Hawaiian & Other Pacific Islander populations in the United States.

In 1978, a joint congressional resolution established Asian/Pacific American Heritage Week. The first 10 days of May were chosen to coincide with two important milestones in Asian/Pacific American history: the arrival in the United States of the first Japanese immigrants (May 7, 1843) and contributions of Chinese workers to the building of the transcontinental railroad, completed May 10, 1869. In 1992, Congress expanded the observance to a month-long celebration.external icon

During Asian American and Pacific Islander (AAPI) Heritage Month, we honor the perseverance of those who courageously reached for their hopes and dreams in a new land, and we celebrate the important impact the AAPI community has made on our nation’s progress.

Breast and Cervical Cancer Screening in Funded U.S. Affiliated Pacific Islands
CDC’s National Breast and Cervical Cancer Early Detection Program funds four of the U.S. Affiliated Pacific Islands (USAPI): Republic of Palau, Republic of Guam, American Samoa, and Commonwealth of the Northern Mariana Islands for breast and cervical cancer screening. These funded programs implement culturally appropriate cancer prevention and control interventions to reduce cancer morbidity and mortality. A primary goal of the program is to reduce health disparities, and in accordance with the Healthy People 2020external icon goals for the nation, this program aims to increase access to screening.

This video story features a conversation between a daughter and her parents, with the daughter explaining why Asian Americans should be tested for Hepatitis B.

Know Hepatitis B
AAPIs make up 5% of the total population in the United States, but account for more than 50% of Americans living with chronic Hepatitis B. An estimated 1 in 12 Asian Americans is living with hepatitis B. Despite these high rates, many are not tested for Hepatitis B and do not know they are infected. Many people can live with the disease and not feel sick or have any symptoms. As a result, chronic Hepatitis B and associated liver cancer in AAPIs is one of the most serious health disparities in the United States. CDC, along with partner, Hep B United, launched the Know Hepatitis B campaign to promote Hepatitis B testing among Asian Americans. These messages aim to facilitate education and communication about Hepatitis B among healthcare providers, local partners, and patients.

Asian and Pacific Islander HIV Awareness
National Asian & Pacific Islander HIV/AIDS Awareness Dayexternal icon is observed in May to raise awareness about HIV and AIDS in Asian and Pacific Islander communities and to encourage people to get tested for HIV. The number of HIV diagnoses among Asians has increased in recent years, along with the growth of the Asian population in the United States. Among Asians, gay and bisexual men are most affected by HIV. More than 1 in 5 Asians living with HIV do not know they have it. Learn more about HIV infection among Asians in the United States and what you can do to raise awareness.