If hantavirus is confirmed, we request that you complete a Hantavirus Case Report Form pdf icon[PDF – 1 page]. This form is not required for submission of specimens.

Learn more about submitting specimens to VSPB for testing.

Learn How COVID-19 Compares to HPS 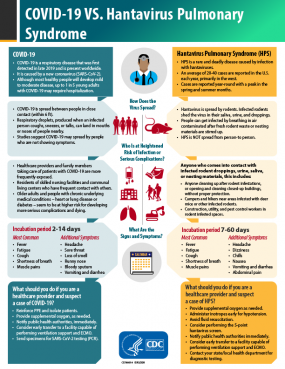 Testing at CDC is done only with prior consultation. Please call the CDC’s Emergency Operations Center at 770-488-7100 or email spather@cdc.gov for questions.

Individuals other than physicians or appropriate state health department employees

Private citizens may not submit specimens to CDC for testing. If you feel that diagnostic testing is necessary, consult your physician or state health department.

Learn How COVID-19 Compares to HPS