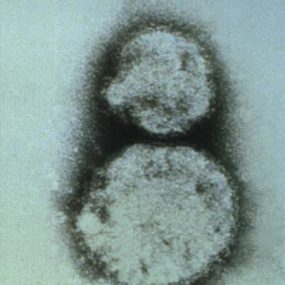 Bunyavirales is an order of single-strand, spherical, enveloped RNA viruses (formerly the Bunyaviridae family). The virus families in the Bunyavirales order that cause viral hemorrhagic fevers include Phenuiviridae, Arenaviridae, Nairoviridae, and Hantaviridae. Distribution of these viruses is determined by the distribution of the vector and host species.

Rift Valley fever virus (family Phenuiviridae) was first isolated in 1930 as part of a large outbreak among sheep in East Africa. This mosquito-borne virus is present in nearly all sub-Saharan African countries. Outbreaks in people and animals have occurred in several African countries and the Arabian Peninsula.

Crimean-Congo hemorrhagic fever (CCHF) virus (family Nairoviridae) was first recognized in the Crimean Peninsula (in the south of present-day Ukraine) in an outbreak among agricultural workers in the 1940s. The same virus was isolated in 1956 from a single patient in present day Democratic Republic of Congo, giving the virus its name. The virus is spread by infected ticks or livestock, and person-to-person transmission can also occur.

How viruses in the Bunyavirales order spread

These viruses can spread by arthropods (such as mosquitoes, ticks, sand flies) or rodents, and can produce mild to severe disease in animals and people. Many of the viruses in the bunyavirales order (except phleboviruses) cannot spread from person-to-person. Secondary transmission of Crimean-Congo hemorrhagic fever has occurred in healthcare settings.

Prevention of Bunyavirales depends on the host reservoir and how the virus spreads. Prevention measures typically target rodent or insect exclusion activities, either by use of insect repellents, bed nets, and protective clothing, or by sealing up and setting traps in homes and other buildings when a rodent infestation is discovered.