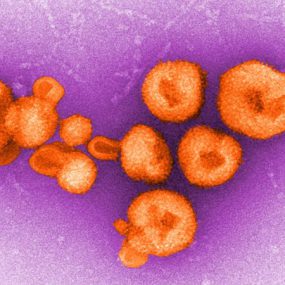 Viruses in the family Arenaviridae are generally spread by rodents, with each virus associated with one, or a few, closely related rodent species that serve as the virus’ natural reservoir. The types of rodents that spread arenaviruses are located across much of the world, including Europe, Asia, Africa, and the Americas. In some areas of the world, arenavirus infections in people are relatively common and can cause severe disease.

Lymphocytic choriomeningitis virus (LCMV) was the first arenavirus identified. It was isolated in 1933 during a study of a St. Louis encephalitis epidemic. Although not the cause of the outbreak, LCMV was found to be a cause of nonbacterial meningitis. Since then, new arenaviruses have been discovered regularly.

How viruses in the Arenavirus family spread

While rodent hosts are chronically infected with an arenavirus, they do not appear to become ill. Most infections spread among adult rodents through scratches and bites, although for certain arenaviruses, the virus passes from mother to offspring during pregnancy. Arenaviruses are shed into the environment in the urine, saliva, or droppings of infected rodent hosts. People become infected by breathing in the virus after rodent urine, droppings, or nesting materials are stirred up, such as during cleaning. People can also get infected by touching their face after touching the virus, through the bites or scratches of infected rodents, and by eating contaminated food. In some instances, arenaviruses can spread to people when consuming infected rodents as a food source.

Person-to-person transmission can occur with certain arenaviruses, such as Chapare, Lassa, Machupo, and Lujo viruses. This type of transmission usually occurs when there is direct contact with the blood or other body fluids of infected individuals. Contact with contaminated objects, such as medical equipment, is also associated with spreading these viruses. Use of protective clothing and disinfection procedures while caring for a sick person can help prevent further spread of disease.

Arenaviruses are divided into two groups – New World and Old World viruses – based on genetic differences as well as where the viruses are geographically distributed. New World viruses are found in the Western Hemisphere — North and South America. They include Chapare virus, a severe or fatal hemorrhagic fever, found in Bolivia, as well as Guanarito virus found in Venezuela.

There are some arenaviruses – both New and Old World — that have been identified in host animals, but no human infection has been reported yet.