Appendix: Methods for the cost-benefit analyses presented in “Benefits from Immunization during the Vaccines for Children Program Era — United States, 1994–2013“, MMWR 2014;63:352-5.

We developed one decision tree for each vaccine as the basis for our model (see example, Figure 1) and then evaluated the effect of routine childhood vaccination on hypothetical US birth cohorts for children born during 1994 through 2013 (range 3,744,999 children to 4,147,947 children per cohort) [http://www.census.gov/popest/external icon] from birth through death. When the VFC program began in 1994, vaccines targeting nine diseases were provided for children aged ≤6 years: diphtheria, tetanus, and pertussis (DTaP), polio (OPV then IPV), Haemophilus influenzae type b disease (Hib), hepatitis B (Hep B), and measles, mumps, and rubella (MMR). Three vaccines were added between 1996 and 2013: varicella (1996), pneumococcal disease (PCV; 7-valent in 2000, 13-valent in 2010), and rotavirus vaccine (Rota; 2006); influenza and hepatitis A vaccines were also added by VFC during this period but were not included in our model. In the 2013 schedule, the Centers for Disease Control and Prevention (CDC)’s Advisory Committee on Immunization Practices (ACIP) recommended routine administration of 5 doses of DTaP, 3 or 4 doses of Hib (depending on product used), 4 doses of IPV, 2 doses of MMR, 3 doses of HepB, 2 doses of VAR, 4 doses of PCV13, and 2 or 3 doses of Rota (depending on product used) by age 6.[1] Our analysis is based on coverage attained for each of these vaccines in the United States each year during 1994-2012 as estimated by the National Immunization Survey (NIS),[2] Immunization Information Systems[3,4] available in some areas, and School and Childcare Vaccination Surveys.[5]

The analyses were performed from 2 perspectives: direct cost (direct medical and nonmedical costs) and societal (direct and indirect costs). Direct medical costs include those associated with treating an initial infection as well as costs associated with complications and sequelae of diseases. Direct non-medical costs include travel costs, costs for special education of children disabled by diseases, and costs for other supplies for special needs. Indirect costs include the productivity losses due to premature mortality and permanent disability among cohort members as well as opportunity costs associated with parents who miss work to care for their sick children or cohort members themselves who miss work due to vaccine-preventable illness. Benefits of routine childhood immunization are quantified as the savings in direct and indirect costs that accrue from averting morbidity and mortality by vaccination. The costs associated with the immunization program include the vaccines, their administration, parent travel and work time lost and adverse events associated with these vaccines. All costs were adjusted to 2013 dollars using general and medical Consumer Price Indices, and all costs and benefits in the future were discounted at a 3% annual rate. We calculated net present values (NPV) for all vaccines together. NPV is the sum of the discounted benefits from the routine childhood immunization program minus the sum of the discounted costs.

The data for burden of diseases, costs of diseases, costs for outbreak control and costs of vaccination and adverse events used in our analysis were compiled from a variety of sources: the published literature including surveillance data, study data, and expert consensus; several large computerized data sets; and CDC unpublished data. When it was necessary to make estimates about the incidence of disease and complications from multiple publications, results from existing meta-analyses were used.

Estimating the burden of diseases without vaccination

The age-specific annual incidence rates of diphtheria, tetanus, pertussis, Hib, poliomyelitis, measles, mumps, rubella and varicella diseases, and the prevalence, complications and perinatal transmission of hepatitis B in the United States in the pre-vaccine era were obtained from a previous analysis (Table 1).[6-23]

For pneumococcus–related diseases, the age-specific estimated incidence rates in the United States in the pre-vaccine era were obtained from CDC’s Active Bacterial Core Surveillance (ABCs) (for invasive pneumococcal diseases, or IPD) and the literature (for pneumonia and acute otitis media).[24-27] Age-specific pre-vaccine IPD rates and case-fatality rates for IPD were based on data from the ABCs program for 1998 and 1999. All-cause pneumonia incidence and acute otitis media rates were obtained from the literature. [24-27]

Estimating the burden of diseases with vaccination

For all diseases except varicella, hepatitis B, pneumococcal diseases, and rotavirus, we used surveillance data for 1994-2012 from the National Notifiable Diseases Surveillance System (NNDSS) to estimate the burden of diseases with vaccination in 1994-2013. For varicella, we used age-specific incidence data from West Philadelphia Varicella Active Surveillance Project (VASP) site for 1996-2010, and for 2011 and 2012, we used the age-specific data from 31 states from NNDSS, to estimate the total number of varicella cases in the United States. Based on data from VASP, we assumed that 0-92.3% of reported cases involved persons that had previously received varicella vaccine, with the proportion vaccinated varying by year, and that cases in vaccinated persons were much milder than cases among unvaccinated persons.[32] For hepatitis B, since chronic cases were not reported to NNDSS, we used an established hepatitis B decision analysis model[33] the vaccination coverage rates[2] and the vaccine efficacy estimates[34] to estimate the likelihood of hepatitis B infection and sequelae among vaccinated and unvaccinated children in the cohort. For pneumococcal disease, vaccination era IPD rates and case-fatality rates for IPD were based on data for 2001-2012 from ABCs. All-cause pneumonia incidence and acute otitis media rates were obtained from the literature.[24-27,35] For rotavirus disease, we developed a decision analysis model using the vaccination coverage rates from NIS[2] and efficacies of the two vaccines[36-40] to estimate the likelihood of rotavirus infections and their sequelae among vaccinated children in the cohort.

Direct costs for outbreak control, and outpatient and inpatient visits were included in the analysis. The cost of outpatient visits, average duration of hospital stay, hospitalization costs and costs for outbreak control for each condition related to these diseases including congenital rubella syndrome (CRS), were obtained from published and unpublished studies (Table 2).[7-10,25-27,30,31,33,41-46] All costs shown here were in 2013 dollars.

To estimate the productivity losses from premature mortality, we used the human capital approach.[47] Costs for work loss were determined by the number of days of missed work (for provision of care to sick children, for illness among cohort members, or for resulting disability) multiplied by the daily wage rate associated with the value of lost wage-earning work and the imputed value of housekeeping and home-care activities. We assumed the days of morbidity were distributed randomly throughout the week.

Vaccination coverage was based on 1994-2012 NIS data (2012 data were used for 2013), and used to calculate the vaccine costs for each cohort. Overall, more than 50% of US childhood vaccines were publicly purchased in 2013 (CDC, unpublished data, 2013). The 1994-2013 public and private prices for all vaccines were obtained from the CDC Vaccine Price List (https://www.cdc.gov/vaccines/programs/vfc/awardees/vaccine-management/price-list/index.html). We assumed that the overall rate of vaccine wastage (public and private sectors) was 5%.[48] The federal excise tax that supports the National Vaccine Injury Compensation Program was not included in vaccine prices.

NIS data indicate that more than 70% of children obtained their vaccines from private providers.[49] The cost for administering a vaccine dose during a visit to a private clinic was estimated at $29.07.[9,10] For the public clinic, we used an administration cost of $8.15.[9,10]

We assumed that caregivers take 2 hours off from work to take the child for vaccination (as per previous economic studies[9,10]). We assumed that the average cost for these caregivers was $18.19 per hour, and cost for caregiver’s travel to the clinic was $23.45.[31]

* Some estimates used in the analysis varied by age, outcome of disease, and with or without vaccination program. 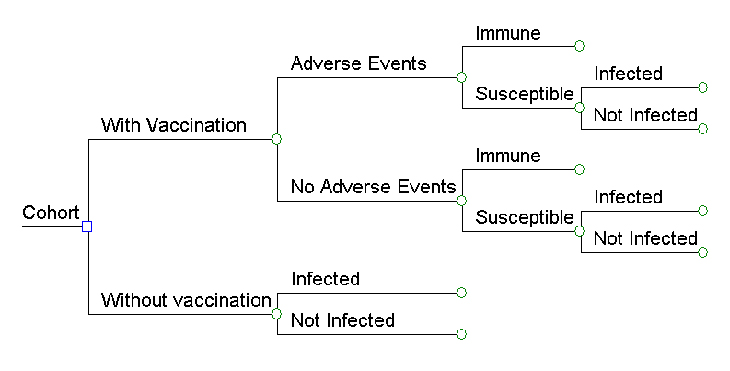