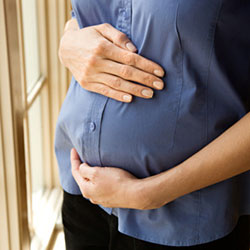 If a pregnant woman is infected with a non-polio enterovirus shortly before delivery, there is a chance she can pass the virus to her baby. These babies usually have only mild illness, but in rare cases they may have severe infection.

There is no clear evidence that non-polio enterovirus infection during pregnancy increases the risk of severe complications like miscarriage, stillbirth, or congenital defects.