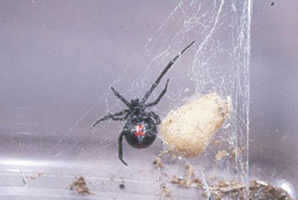 Photo courtesy of University of Missouri

Black widow spiders are found throughout North America, but are most common in the southern and western areas of the United States. They are identified by the pattern of red coloration on the underside of their abdomen. They are usually found in workplaces containing undisturbed areas such as woodpiles, under eaves, fences, and other areas where debris has accumulated. They may also be found living in outdoor toilets where flies are plentiful.

Black widow spiders build webs between objects, and bites usually occur when humans come into direct contact with these webs. A bite from a black widow can be distinguished from other insect bites by the two puncture marks it makes in the skin. The venom is a neurotoxin that produces pain at the bite area and then spreads to the chest, abdomen, or the entire body. 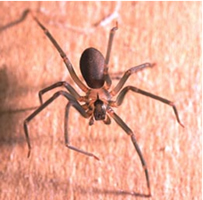 The brown recluse spider, also known as the violin spider, is most commonly found in the Midwestern and southern states of the United States. It is brown in color with a characteristic dark violin-shaped (or fiddle-shaped) marking on its head and has six equal-sized eyes (most spiders have eight eyes). Brown recluse spiders are usually found in workplaces with secluded, dry, sheltered areas such as underneath structures logs, or in piles of rocks or leaves. If a brown recluse spider wanders indoors, they may be found in dark closets, shoes, or attics.

The brown recluse spider cannot bite humans without some form of counter pressure, for example, through unintentional contact that traps the spider against the skin. Bites may cause a stinging sensation with localized pain. A small white blister usually develops at the site of the bite. The venom of a brown recluse can cause a severe lesion by destroying skin tissue (skin necrosis). This skin lesion will require professional medical attention.