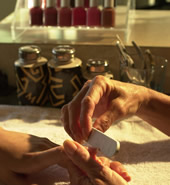 Approximately 350,000 people are employed in nail salons and other personal care services in the United States according to industry estimates (Nails Magazine, 2008–2009). These estimates indicate the workforce is largely female (96%) with the industry employing a large number of minority workers (63%). Nail salon employees are potentially exposed to dozens of chemicals including acrylates, solvents, and biocides as dusts or vapors. A small but growing number of studies have examined possible links between nail technicians’ work and health outcomes, such as respiratory, neurological, and musculoskeletal effects, as well as other health conditions. Much of the NIOSH-sponsored research to-date has focused on the respiratory system. Concerns about job-related health effects associated with chemicals routinely used by nail technicians drew new attention on May 11, 2015, when Governor Andrew M. Cuomo of New York announced a new initiative to “prevent unlawful practices and unsafe working conditions” in New York nail salons, following the publication of a two-part investigative series in the New York Times.

Nail technicians perform manicures and may also perform pedicures. Manicures are performed over a workstation—or “nail table”—with the client’s hands resting on the table as they work. The nail table is, therefore, directly below the nail technicians’ breathing zone. Downdraft vented nail tables and portable source capture systems that place local exhaust ventilation close to the work area provide the means to vent (remove) potential dust or chemicals away from the breathing zone. Thus, theoretically, potential contaminants may be removed before they cross the breathing zone and are inhaled. Good general room ventilation is also important. There is some overlap in nail products and processes for manicures and pedicures. Exposures may differ, though, as pedicures involve processes such as soaking feet, filing calluses, and the use of pedicure work stations, but do not typically involve artificial nail application.

The NIOSH publication entitled Controlling Chemical Hazards During the Application of Artificial Fingernails (NIOSH Publication No. 99-112) describes simple measures to reduce exposures during artificial nail application, such as keeping dispensers closed and wearing long sleeves and gloves to protect skin from potential irritants and sensitizers. Information is also provided on engineering controls, such as how to build a downdraft vented nail table that vents to the outdoors, plus references to other sources of information.

View the Spanish version of this report.

The National Institute for Occupational Safety and Health (NIOSH) conducted a research project to examine the effectiveness of different portable source capture ventilation systems (SCVS) units with the potential for use in nail salons. Units received for evaluation in response to a Federal Register Notice featured local exhaust recirculation. With local exhaust recirculation, contaminated air is drawn through a filter and then vented it back into the room (for the NIOSH evaluation, however, air was vented into an exhaust system). The air intakes on these SCVS units could also be positioned so that contaminated air could be drawn into the unit before it crosses the breathing zone of the face. Airflow and capture characteristics of the units as well as the noise levels around them were evaluated.

NIOSHTIC-2 is a searchable bibliographic database of occupational safety and health publications, documents, grant reports, and journal articles based on research supported in whole or in part by NIOSH. 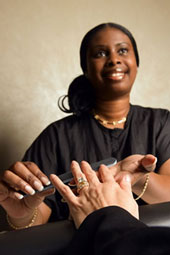 Am J Ind Med. 2009 Nov;52(11):868-75.
A pilot respiratory health assessment of nail technicians and a comparison group was conducted. Lung function values and symptoms were presented by group. Among the nail technician group, relationships between respiratory measures (lung function and nitric oxide) and some exposure measures were seen, suggesting a need for further study.

Urinary phthalate metabolite concentrations among workers in selected industries: a pilot biomonitoring study
Ann Occup Hyg. 2009 Jan;53(1):1-17.
Workers from manufacturing companies and nail-only (manicure) salons that used phthalates or phthalate-containing materials were recruited into the study. Manicure, pedicure and artificial nail services were provided at nail-only salons where di-n-butyl phthalate (DBP) was confirmed in polishes, topcoats and basecoats used by the study participants. Concentrations of 10 phthalate metabolites were measured in workers’ urine samples. Occupational exposure to DBP was most evident in rubber gasket, phthalate (raw material) and rubber hose manufacturing, with DBP metabolite concentrations exceeding general population levels by 26-, 25- and 10-fold, respectively, whereas DBP exposure in nail-only salons (manicurists) was 2-fold higher than in the general population.

Risk factors for asthma among cosmetology professionals in Colorado
J Occup Environ Med. 2006 Oct;48(10):1062-9.
A study was conducted of the prevalence, work-attributable risk, and tasks associated with asthma in a random sample of cosmeticians, manicurists, barbers, and cosmetologists holding licenses in Colorado. Application of artificial nails, hairstyling and shaving and honing were significantly associated with asthma arising in the course of employment.

Hazards of Ethyl Methacrylate [NIOSHTIC-2 abstract]
Am J Contact Dermat. 2000 Jun;11(2):119-20.
Letter to the editor with reference to NIOSH Health Report No. ECTB 171-05v, “Controlling Chemical Hazards in the Nail Salon Industry.” Contains a reply to commentary regarding the description of hazards of ethyl methacrylate in the NIOSH report.

A new manicure table for applying artificial fingernails [NIOSHTIC-2 abstract]
Appl Occup Environ Hyg. 2000 Jan;15(1):1-4.
A multi-station downdraft nail table was developed by NIOSH for workplaces where several clients are served at once. A schematic of the table, which vents to the outdoors, was shown and other measures to reduce exposures are described. The table was evaluated and shown to reduce levels of ethyl methacrylate in personal breathing zones.

Control of ethyl methacrylate exposures during the application of artificial fingernails
Am Ind Hyg Assoc J. 1997 Mar;58(3):214-8.
A commercially available recirculating downdraft nail table with charcoal filters was purchased and evaluated. NIOSH made modifications to the table and vented the system to the outdoors. An evaluation was performed. The average ethyl methacrylate exposure in personal breathing zone samples when using the modified table for approximately 6 hours was 0.6 ppm; when using the unventilated conventional table, the average exposure was 8.7 ppm. The difference in the values was statistically significant.

Exposure Assessment in Nail Salons: An Indoor Air Approach
ISRN Public Health Volume 2012 (2012), Article ID 962014, 7 pages
Due to the complexity of the nail salon work environment, traditional approaches to exposure assessment in this context tend to mischaracterize potential hazards as nuisances. For this investigation, a workable “indoor air” approach was devised to characterize potential hazards and ventilation in Boston, Massachusetts area nail salons which are primarily owned and staffed by Vietnamese immigrants. A community-university partnership project recruited salons to participate in a short audit which included carbon dioxide measurements and evaluation of other air quality metrics. Twenty-two salons participated. Seventy-three percent of the salons had spot carbon dioxide measurements in excess of 700 ppm, the level corresponding to a ventilation rate recommended for beauty salons. Fourteen salons (64%) did not have a mechanical ventilation system to provide fresh air and/or exhaust contaminated air. The lack of adequate ventilation is of significant concern because of the presence of potentially hazardous chemicals in salon products and the common self-report of symptoms among nail technicians. Community and worker health may be improved through adoption of recommended ventilation guidelines and reduction in the hazard potential of nail products.

J Immigrant Minority Health (2008) 10:353–361.
A community-university collaborative partnership assessed self-reported work-related health effects and environmental factors in Boston’s Vietnamese immigrant community via an interviewer-assisted survey. Seventy-one nail technicians responded. Musculoskeletal disorders, skin problems, respiratory irritation and headaches were commonly reported as work-related, as were poor air quality, dusts and offensive odors. The reporting of a work-related respiratory symptom was significantly associated with the reporting of exposure factors such as poorer air quality. Absence of skin disorders was associated with glove use and musculoskeletal symptoms were associated with years worked as a nail technician. Work-related health effects may be common in nail salon work. Chemical and musculoskeletal hazards should be reduced through product and equipment redesign.

The OSHA website covering Health Hazards in Nail Salons includes information and steps that nail salon workers and employers can take to prevent injuries and illnesses. Information is also available for workers in OSHA’s publication “Stay Healthy and Safe While Giving Manicures and Pedicures: A Guide for Nail Salon Workers,” also available through this website.