Fires can be devastating and fatal, but they do not have to be. Fire sprinkler systems were effective at controlling the fire in 97% of home fires between 2015-2019.1 Installing a fire sprinkler system is a practical way to keep people and firefighters safe from the risks of fires. 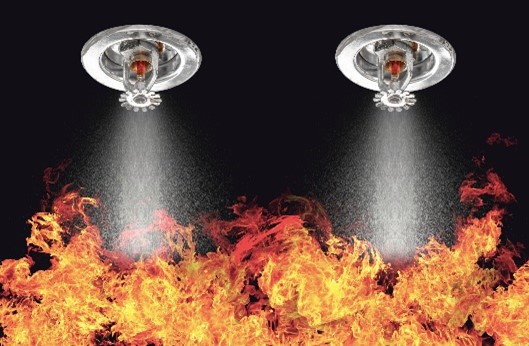 A fire sprinkler system is a type of automatic extinguishing system (AES) that prevents fire growth and spread by releasing water through a series of sprinkler heads connected to a distribution piping system. Water is released through the sprinkler heads once the surrounding air reaches 165 degrees Fahrenheit. This is an active protection method that can contribute to the safety of firefighters and those they work to protect.

Although these systems provide protection, they are not present in every structure. Fire departments responded to an average of 51,000 structure fires per year from 2015-2019.1 Only 10% of those structures had fire sprinkler systems.1 Additionally, most structure fires and fire deaths occurred in homes, but only 7% of all home fires had sprinklers.1

Being proactive in fire prevention is not limited to having a fire sprinkler system. The NIOSH Fire Fighter Fatality Investigation and Prevention Program recommends that municipalities, building fire code officials, and authorities having jurisdiction should consider the following actions:

These recommendations could apply to commercial and industrial structures like warehouses, strip malls, and factories as well as residential structures like apartments and single-family dwellings that are converted to multifamily dwellings. Commercial or industrial structures may have high risk high hazard inventory such as furniture, lumber, and other flammable products. The added risk highlights the importance of acting on these recommendations.