Silicosis in the Workplace

Workplace exposures to crystalline silica can cause severe health effects in workers.

What is Crystalline silica? 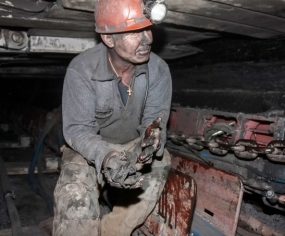 Crystalline silica is a natural component of stone, soil, and sand. It is also found in other materials such as concrete, mortar, granite, and artificial stone. Millions of U.S. workers are exposed to respirable crystalline silica in a variety of industries, including mining, stone countertop fabrication, construction, oil and gas extraction, foundries, and other manufacturing settings. It is recognized across the United States and world-wide as hazardous because it can cause an irreversible lung disease called silicosis, as well as other serious lung diseases including chronic obstructive pulmonary disease and lung cancer.

Respirable crystalline silica is a key factor in the increase of severe pneumoconiosis in coal miners in Kentucky, Virginia, and West Virginia (central Appalachia). Since 1980, the prevalence of r-type small opacities, an abnormality found in x-rays that are associated with silicosis, has increased sixfold among underground coal minersexternal icon in central Appalachia. A 2016 studyexternal icon described lung pathology consistent with silicosis among coal miners with rapidly progressive pneumoconiosis. Evaluation of lung tissue samples showed that these miners were exposed to silica and silicates contained in coal mine dust. Other studies that have examined coal mining jobs known to be associated with higher exposures to silica (e.g., roof bolters, drillers, and blasters) have shown that severe and rapidly progressive disease is more common among these workers. Case reports have identified the practice of “slope mining,” whereby miners take extended cuts through rock to access coal seams, as possibly associated with pneumoconiosis in underground miners. A 2018 publicationexternal icon quoted an eastern Kentucky miner reflecting on his experience with thin-seam coal mining: “all the big seams of coal are gone, and they’re cuttin’ rock everywhere, and it’s just…the silica…It’s just unreal.”

Monitoring the exposure of coal miners and the level of crystalline silica in a coal mine is the first step to reduce and minimize associated health effects and disease. While currently used monitoring techniques are accurate, they don’t provide timely information to the coal miner about overexposure and how to minimize exposure using engineering and administrative controls. The NIOSH Mining Program has developed a field-based monitoring approach that uses a portable instrument to analyze data collected in the field by the end of the day. The field-based approach is user friendly through specially designed sampling components and dedicated software developed by NIOSH. The field-based monitoring system does not destroy samples, which can be sent to an external laboratory for verification of results. The new field-based monitoring approach can support mining operators in protecting the health and safety of their coal miners. 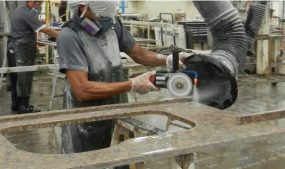 A countertop fabricator grinding a stone countertop.
Photo by NIOSH

For more information about respirable crystalline silica in the workplace, go to the NIOSH Crystalline Silica web page.