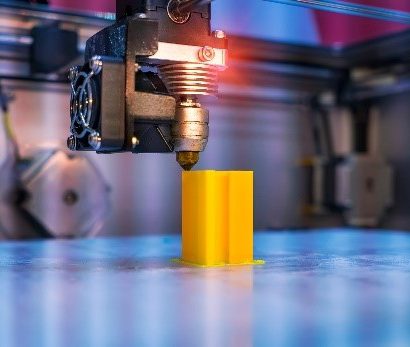 3-D printers that make objects from plastics can release very small, potentially harmful particles and gases. Some ways to reduce exposures to these chemicals include using a 3-D printer in a room with lots of fresh, uncontaminated air provided by the ventilation system or open windows and doors, using lower emitting plastics, following the printer and plastic manufacturer’s safety instructions, and keeping the printer clean.

What is 3-D printing?

What are 3-D printer exposures?

3-D printing with plastic involves heating the plastic in the form of filament (similar appearance to a wire) until it has a liquid consistency and using a computer program to stack it in repeated layers. As each layer cools and hardens, it forms a solid object. During heating, the plastic breaks down and persons who are operating or are nearby a 3-D printer can be exposed to chemicals in the form of very small particles and gases. These particles often have size less than 100 nanometers, which is about 2,000 times smaller than the average width of a human hair. Because of their small size, these particles are invisible to the eye. However, when you breathe these particles, they can reach deep into your lungs, making it difficult for the body to remove them. Gases released during 3-D printing are also invisible to the eye, though some have odors that you can smell. When breathing in, these gases can contact any part of your nose, throat, and lungs.

What can you do to reduce exposure?

There are several ways you can avoid breathing in small particles and gases released by 3-D printers.

Before you buy a 3-D printer:

If a 3-D printer is already set-up in a space: