On April 14, 1999, a 59-year-old laborer at a factory that manufactured plastic bags was fatally injured after falling down a flight of industrial stairs. The incident occurred after the victim had ascended the stairs to adjust a machine on the third level. He did not complete the adjustment and apparently fell as he was descending to the ground level of the plant. There were no witnesses to the fall. The victim was found unconscious at the bottom of the stairs with severe head injuries. He was transported to the local hospital where he died of his injuries two days later. It was noted that the victim was a newly diagnosed diabetic and that his medical condition may have contributed to the incident. NJDHSS investigators concluded that, to prevent similar incidents in the future, these safety guidelines should be followed:

On April 22, 1999, NJ FACE personnel were informed by the county medical examiner’s office of a work-related fatal fall at a factory that manufactures plastic bags. FACE investigators contacted the employer and conducted a site visit on April 29, 1999. During the visit FACE investigators interviewed a company representative and photographed the incident site. Additional information was obtained from the police report and the medical examiner’s report.

The employer was a plastic bag manufacturer who had been in business for 39 years and employed 30 unionized workers. This plant had been in operation since 1978 after the company moved their manufacturing operations from a neighboring state. Manufacturing was done 5½ days per week, three shifts per day.

The victim was 59-year-old male who had worked for the company for 38 years. He was the set up man for the plant and was responsible for operating and adjusting the process machines. His experience allowed him to do many jobs and it was reported that he would often “run the place.” Born in Guatemala, he was bilingual in Spanish and English. About two weeks before the incident the victim had been hospitalized with adult onset diabetes mellitus. He was treated and released with medication to control his condition.

The site of the fatality was a manufacturing plant in a suburban industrial park. The 80,000 square foot plant housed a 30,000 square foot manufacturing area along with warehouse and office spaces. Within the manufacturing area were several plastic extrusion machines used to manufacture plastic bags. To make the bags, raw plastic pellets were fed into the machines where they were melted. The plastic was extruded under pressure into a tube of thin plastic film. As the plastic film passed out of the machine, a fan blew the plastic up towards the ceiling to shape and cool it. About 25 feet above the extruder was a second machine where the plastic was gathered and run through a series of rollers that folded and flattened the film. The plastic then moved back to ground level where a third machine sealed and perforated it to make the plastic bags. Printing was added if needed and the bags were wound into rolls or separated into individual bags.

No one witnessed the incident. On Tuesday, April 11, 1999, the victim arrived for work at 4:00 p.m. and was scheduled to work a double shift that ended at 8:00 a.m. the next day. He had returned to work after being hospitalized for diabetes shortly before the plant’s annual ten-day maintenance shutdown. By the end of the shutdown he had returned to working his usual double shifts. On this evening he was doing his usual job of setting up the machines. He was last seen at 12:40 a.m. by a coworker who later said that he appeared to be acting normal. Sometime after being seen the victim went to adjust the settings on one of the plastic machines. This required going up three flights of industrial stairs to adjust the rollers on the machine, a relatively simple procedure that takes about 15 minutes. He went up upstairs to make the changes but came down without completing the job. At about 1:00 a.m. a coworker at a nearby machine found him unconscious at the bottom of the stairs. Police and EMS arrived and transported the victim to the local hospital where he was admitted with a fractured skull. Despite treatment his condition deteriorated and he was placed on life support. He died of his injuries on April 16, 1999.

Recommendation #1: Employers should provide and maintain stairs with non-slip surfaces.

Discussion: It is not exactly how the victim was injured in this incident. The FACE investigation noted that the steps on the stairway had smooth steel treads that could be slippery. To provide better protection against slips and falls, the FACE project recommends that stair treads be provided with a non-slip surface. The surface must be maintained as the non-slip coating or material wears with use. In areas where plastic pellets may create a slipping hazard, employers should consider stairs with a non-slip grating that allows the plastic pellets to fall through. 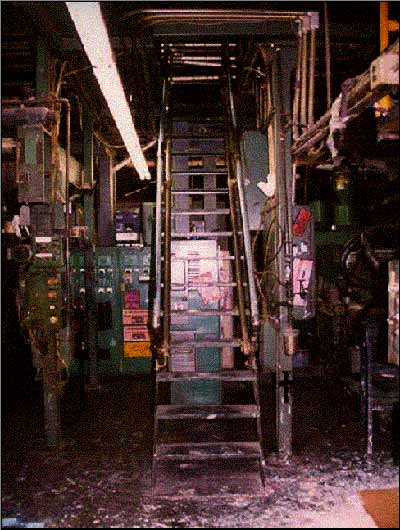