Equipment Operator Killed After Backing a Forklift Into an Excavation

On October 20, 1998, a 40-year-old equipment operator for a power company was killed when she backed a forklift into a trench covered with plywood. The incident occurred at a company building that was being partly torn down to make way for a new highway. A storeroom in the building had been cleared, leaving three pallets of material staged outside the building which the victim was going to remove. She arrived on site and asked a company construction coordinator about the pallets and a forklift. The coordinator (who was not aware of the trench) directed her to a forklift on the loading dock. Behind the forklift was a five foot wide, four foot deep trench that had been dug across the loading dock a few hours earlier and covered with large sheets of plywood. The victim walked through the building to the loading dock, crossing a barrier of yellow tape but not over the plywood. She apparently did not realize that the plywood covered a trench as she backed the forklift across the loading dock. The lift broke through the plywood and fell backwards into the trench, crushing the victim when the impact bent the forklift’s cage support into the steering wheel. NJ FACE investigators concluded that, to prevent similar incidents in the future, these safety guidelines should be followed:

On October 23, 1998, NJ FACE investigators were notified by the county medical examiner of a fatal forklift incident that occurred on October 20. FACE investigators contacted the employer and arranged for a site visit that was conducted on November 20, 1998. During the visit, investigators interviewed two company representatives and examined the incident site. Additional information was obtained from federal OSHA, the company’s internal investigation report, and the police and medical examiners’ reports.

The employer was a unionized power utility company that provided electrical power to New Jersey and several surrounding states. In business since March 1989 when two smaller utilities merged into the present company, the company employed a total of about 4,000 workers. Safety practices included an extensive written safety program, an equipment training and certification program, monthly safety meetings, and on-site tailboard meetings. The company also supported a union-management safety committee that thoroughly investigated the incident.

The victim was a 40-year-old female equipment operator who had worked for the company for 19 years and nine months. Hired long before the companies merged, she started as a storekeeper and advanced to rigging crewman in 1981. In 1990 she was promoted to equipment operator and became the company’s most senior equipment operator in 1995. At the time of the incident she was part of the company’s heavy hauling department and was responsible for picking up and transporting heavy loads and bulk material. Her work history included a serious injury in 1989 followed by several minor injuries and a motor vehicle accident. In 1997 she received a commendation for safety performance. She was married with three children.

The incident occurred in a power company operations building along a coastal bay. This was one of three facilities on the site that included a power generation building and hot water plant. The operations building was a large single-story building with a loading dock that previously held the company’s underground and troubleshooting departments. In 1997 the company reorganized these departments, moving most of the workers out of the operations building. This move was concurrent with a New Jersey Department of Transportation (NJDOT) plan to build a highway and tunnel through the area. In September 1997 the NJDOT contracted a construction consortium to build the highway, which was to pass along the bay and through the power company’s property. In December 1997 the power company completed the sale of ten acres of the site to the NJDOT, including roughly half the operations building and a third of the generation plant. The construction contractor was to tear down the affected parts of the buildings and save the remaining parts by building new exterior walls.

Work on moving the power generation facility was done from May to June 1998, and the power company moved out of the operations building during August 1998. During this time ongoing meetings were held between the power company and NJDOT construction contractor to discuss the design, time schedule, and safety concerns of the project. An agreement was also made with the contractor for moving the power lines and other process equipment. In September 1998 the construction contractor leased some office and garage space in the operations building because of its central location to the project.

Demolition/construction work on the operations building was started during the week of October 12, 1998. A trench was excavated across the building in a diagonal zig-zag pattern that roughly bisected the building. This trench was for the foundation of the new exterior wall. Once the wall was completed the building south of the trench was to be completely torn down.

A week before the incident the victim and another co-worker were working at the site when the power company’s construction coordinator asked if they could arrange the removal of three pallets of material left over from the operations building storeroom. Construction had just started on the building with concrete-breaking and trenching in the storeroom. The two workers were in the area and saw the beginning stages of construction. After leaving the site the victim and co-worker did not pass on the request to move the pallets until the following week.

The incident occurred on a partly cloudy Tuesday afternoon. The victim arrived for work and was assigned at a tailboard meeting to pick up a turbine engine from the power generation plant. She drove alone to the site in a stake truck, a flatbed truck equipped with a boom. Arriving around 9:15 a.m., she loaded the engine onto the truck with the help of two other workers and completed the job at 10:00 a.m. At 11:00 a.m. she returned to her home facility and discussed picking up the three pallets of material with her supervisor. The supervisor agreed and she drove the stake truck back to the operations building. She arrived at approximately 1:19 p.m. and parked by the operations building’s east bay doors where the pallets were stored. A few minutes later she talked again with the area construction coordinator to confirm where the pallets were and how she was going to load them. Since the boom on the stake truck was not appropriate for lifting the pallets, she was told that there was a forklift truck inside the building on the east side loading dock. Her plan was to drive the forklift across the loading dock to the south end of the building where a ramp led outside. She would then use the forklift to load the pallets onto the stake truck.

After talking with the construction coordinator, she apparently entered the building through a north side entrance and walked through the office areas to the loading dock. At this point she crossed over a yellow warning tape and spoke briefly with a subcontractor’s employee. The forklift was connected to a charger about eight feet from the trench. This section of the trench had been dug earlier that morning and measured about five feet wide by four feet deep and extended across the entire width of the dock. It had been covered by three 4 x 8 foot sheets of 5/8 inch plywood that hid the edges of the trench. The victim disconnected the charger, started the forklift, and backed directly over the plywood. A worker for the contractor (who stated that he had covered the trench under direction from their safety person) saw the victim and tried to warn her, but the forklift broke through the plywood and fell backwards into the trench. The forklift’s rear cage support hit the edge of the trench, crushing the victim when the impact bent the cage into the steering wheel. The witness and several other workers called for help and tried to free the victim. Police, fire, and EMS personnel arrived but were unable to raise the forklift out of the trench. She was pronounced dead at the scene at 1:51 p.m.

The county medical examiner determined the cause of death to “compression asphyxia.”

Recommendation #1: Site owners and contractors should have a formal agreement to control the access to construction areas.

Discussion: It appears that neither the victim nor the worker she spoke with knew the extent of the construction inside the building. Except for the meetings held to discuss the general project issues, there appears to have been little communication between the contractor and the power company. To prevent future incidents FACE recommends that all involved parties develop a written safety agreement for controlling access to the construction areas. The agreement would restrict the construction areas to everyone except the construction workers. All others would be required to check with the contractor before entering. The agreement should also include a clear line of communication between the site owner, general contractor, and any subcontractors. It was noted during the investigation that the contractor has restricted access to the building to authorized persons.

Recommendation #2: Construction contractors should ensure that excavations are clearly marked and/or properly guarded.

Discussion: The contractor recognized the hazard of the construction area and tried to correct it by putting warning tape around the area and covering the open trench with plywood. Unfortunately, the plywood covered and hid the trench. To prevent injuries, NJFACE recommends placing warning tape or protective barriers near the edges of all unattended trenches and excavations. It should be noted that the federal OSHA standard 29 CFR 1926.501 requires guarding excavations that are more than six feet deep and not easily seen.

Recommendation #3: Site owners and contractors should ensure that all unnecessary equipment is removed from site before starting construction.

Discussion: The forklift in this incident was essentially stranded. Once the trench had been dug, the lift could not be moved off the loading dock until a new door was built into an adjoining wall. NJFACE recommends that site owners and contractors remove all unnecessary equipment and other materials from construction areas. This will ensure that the equipment is not misused or damaged. If mobile equipment must be left in the area, the keys should be removed to prevent unauthorized use. 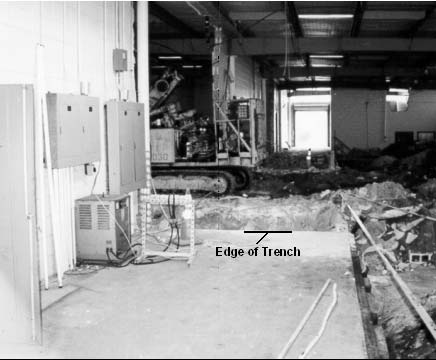 Photo of incident site taken one month after incident