On December 20 and 22, 1999, a 43-year-old male fisherman (victim #1) and a 40-year-old male fisherman (victim #2) were fatally injured in two separate incidents when their clothes became entangled in the rotating propulsion shafts of the fishing vessels they were working aboard. Both victims were one of two people aboard each vessel. Victim #1 was the vessel Captain and owner and victim #2 was the father of the vessel owner. The United States Coast Guard responded to the incidents after emergency assistance calls were placed. The United States Coast Guard determined that both victims’ injuries were consistent with entanglement scenarios. The Massachusetts FACE program concluded that to prevent similar occurrences in the future fishermen should:

On December 30, 1999, the Massachusetts FACE program was notified by a newspaper clipping service, that on December 20, 1999, a 43-year-old self-employed male fisherman (victim #1) had been fatally injured. His shirt became entangled in the rotating propulsion shaft of the fishing vessel he was aboard while attending to the bilge pump. A site visit was not conducted as part of the investigation due to the unavailability of the vessel. In addition, the incident, which occurred off the coast of Massachusetts, fell under the jurisdiction of the United States Coast Guard Office in a neighboring state. The Massachusetts FACE program Director held telephone conversations with coast guard personnel and collected the Coast Guard Investigation Report, Coast Guard Fishing Vessel Safety Alert, death certificate, and newspaper articles.

The victim, a self-employed fisherman, had owned and operated the vessel on which the fatality occurred for approximately one year. A typical fishing trip for the victim would include one other crewmember. Prior to buying his own fishing vessel, he had fished with a family member on his vessel.

On the morning of December 20, 1999, the Captain (victim #1) and his one crewmember set out for a fishing trip in a 54-foot long wood hull rig trawler off the coast of Massachusetts. The boat had a 300-horse power inboard diesel engine. It was reported that there were 2 to 3 foot seas and 10 – 15 knot winds out of the southeast with good visibility.

To gain access to the bilge pump, the victim removed a wood deck cover, which exposed approximately 2 feet of the 2½-inch diameter shaft and the flanged coupling. While reaching underneath the propulsion shaft to clear away debris from the bilge pump, the victim’s shirt became entangled in the rotating shaft, pulling him into the bilge. When the victim did not return to the wheelhouse, the crewmember went to the engine room and found the victim lying face down partially in the bilge with one arm over the propulsion shaft.

On December 23, 1999, the local media notified the Massachusetts FACE program that on December 22, 1999, a 40-year-old self-employed male fisherman (victim #2) had been fatally injured. He was on his son’s fishing vessel (who was a self-employed fisherman), and while checking the vessel’s transmission, his shirt became entangled in the rotating propulsion shaft. On February 23, 2000 the Massachusetts FACE program Director traveled to the location where the fishing vessel was docked and interviewed the marina owner. The death certificate, photographs of the fishing vessel, Coast Guard Investigation Report, and the Coast Guard Fishing Vessel Safety Alert were all obtained during the investigation.

On the morning of December 22, 1999, a fisherman (victim #2) and his son, who owned the fishing vessel, set out for a fishing trip off the coast of Massachusetts in a 30-foot long wood hull vessel, which was rigged for sea urchin dredging. The vessel was equipped with a single inboard gasoline engine and a 70-inch long by 90-inch wide wheelhouse. It was reported that there were 2 to 4 foot seas and 15 – 20 knot winds out of the northwest with 3 miles of visibility. The son typically would work alone on his vessel.

The victim was on board to fish and assist his son in solving a problem with the vessel’s propulsion system, particularly a vibration within the propulsion shaft area. The victim had engaged the clutch from the operating station located inside the wheelhouse and directed the vessel on a southwesterly course. While the victim went to check the transmission, his son took the wheel and steered the vessel. The transmission was located below the deck, behind the operating station, and directly in back of the engine. The engine protruded above the deck line and a wooden housing was used to cover the protruding section of engine. The wooden housing measured approximately 33 inches long, 38 inches wide, and 30 inches high. In addition, to the housing, there was a rectangular wooden deck cover located directly behind the wooden housing. When in place, the wooden deck cover eliminated access to the propulsion shaft and coupling. The deck cover measured 33 inches long and 26 inches wide.

Prior to checking the transmission, the victim had removed the rectangular wooden deck cover exposing approximately 1½ feet of the 1½ inch diameter transmission propulsion shaft and coupling. It was stated in the Coast Guard Report that the son heard a loud clanging sound and then the engine immediately shut down. The son turned around and found his father entangled in the propulsion shaft.

It appeared that while the victim was checking the propulsion shaft and transmission, one or more of the rotating coupling retaining bolts had caught his shirt pulling him into the opening and entangling him with the shaft. The son immediately radioed for emergency assistance. A nearby fishing vessel’s Master relayed the call to the Coast Guard and then went to try and assist the victim. The Master of the nearby fishing vessel helped the son cut the father’s clothing and freed him from the shaft, then they performed 2-person cardiopulmonary resuscitation (CPR). A Coast Guard utility boat arrived and transported the victim to a waiting ambulance. He was then transported to a local hospital where he was pronounced dead.

Both medical examiners listed the causes of deaths for both victims as multiple traumatic injuries.

Recommendation #1: Fishermen should disengage the transmission before attempting to work on or near a propulsion shaft and coupling.

In addition, lockout/tagout procedure should be considered for work on or near vessel propulsion shafts. This may be most appropriate for larger vessels where a section of exposed propulsion shaft might not be near the wheelhouse. The person performing the work could place tags at the control for the transmission and/or the ignition location prior to beginning the work. This same worker would remove the tags only when the task was completed. 1

Recommendation #2: Fisherman should guard moving machine parts, such as propulsion shafts and couplings, to avoid contact.

Discussion: A guard should be designed and constructed to prevent a fisherman from having any part of their body exposed to potential injury even while other barriers such as floor covers are removed. As stated in the United State Coast Guard Regulation 46 CFR 28.215 “suitable hand covers, guards, or railing must be installed in way of machinery which can cause injury to personnel, such as gearing, chain or belt drives, and rotating shafting. This is not meant to restrict necessary access to fishing equipment such as winches, drums, or gurdies.” 2

Certain maintenance activities and diagnosing of mechanical problems may require equipment to be operating, but prior to these activities, the machinery should be completely shut down and a visual inspection performed for possible hazards. In these cases, once the floor covers where removed, the victims had unobstructed access to the rotating propulsion shafts and couplings. Guards could have been constructed out of metal, wood or plastic and have covered just the flanged coupling and the protruding retaining bolts minimizing the entanglement hazard. In addition, when both guarded and unguarded machinery is operating, a safe distance should always be kept between the worker and the moving equipment. 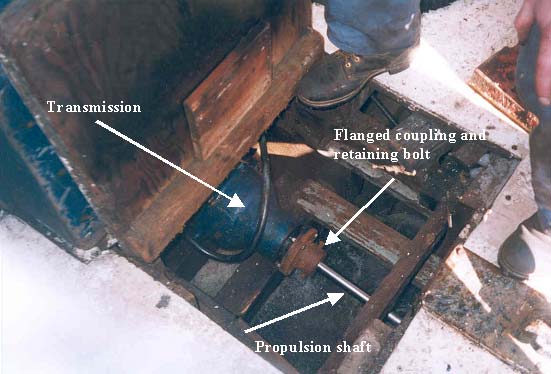