On July 24, 2000, a 61-year-old male mechanic (the victim) was fatally injured when a 55-gallon drum exploded. The victim was using a torch to cut the lid off of the drum, which had previously contained diesel fuel conditioner, so the drum could be recycled. After the explosion an employee activated the company’s emergency system that consisted of a direct line to their alarm company who then placed a call for emergency assistance. The town police and fire departments arrived at the incident site within minutes. The victim was med-flighted to a hospital where he was in critical condition for seven days before he died from the injuries sustained in the explosion. The Massachusetts FACE Program concluded that to prevent similar occurrences in the future employers should:

On August 3, 2000, the Massachusetts FACE Program was notified by OSHA, through the 24-hour Occupational Fatality Hotline, that on July 24, 2000, a male mechanic had been fatally injured. The victim was using a torch to cut the lid off of a 55-gallon drum when it exploded. An investigation was immediately initiated. On August 15, 2000, the Massachusetts FACE Program Director traveled to the incident site where one of the manufacturing facility’s owners was interviewed. The police report, death certificate, OSHA fatality/catastrophe report, photographs and employer interviews were obtained during the course of the investigation.

The employer, a concrete product manufacturer, had been in business for 42 years at the time of the incident. The company employed approximately 50 people, all of whom were working at the time of the incident. There were three mechanics, including the victim, who supervised the other two mechanics. The employer had a written health and safety program with limited written procedures on how selected tasks should be completed. The company had monthly safety meetings that all employees were required to attend. In addition, the company had a safety committee, of which the victim was a member.

The victim was 61 years old and had been employed with the company for 30 years at the time of his death. His training was primarily on-the-job but he had many years of experience as a mechanic when he started working for the manufacturer. There is no union representation at this facility.

The company was a family owned business, operated by the two sons of the original founder. The facility site, where concrete products such as concrete piping and concrete curbing for sidewalks were manufactured, was located on approximately 10 acres. The site consisted of approximately four buildings, one was the maintenance shop where the victim and the other two mechanics worked. The maintenance shop was centrally located between the other three buildings. The company had an emergency system, which contained emergency buttons located around the facility and a direct line to their alarm company. When an emergency button was depressed the system would send a message to the alarm company, which would then immediately place a call for emergency assistance for the company.

The company had an unwritten procedure for handling and discarding empty drums 55-gallon drums. The lids were cut off using a manual drum cutter that resembled a large can opener. The device was hand held and clipped onto the edge of the drum. Pushing down on the device’s long handle made the sharp blade cut into the inside edge, where the lid met the drum. The drum cutter was then moved further around the lid and the procedure repeated. A short section of the lid was left connected to the drum, the lid was bent inside the drum, and then the drum was flattened. The company had previously used a pneumatic drum cutter but management indicated that the victim had thought this device was dangerous because it created sharp edges on both the drum and lid. Apparently, the victim had researched different methods for removing the lids and had selected and implemented the hand held manual device because it did not create sharp edges.

On the day of the incident, the victim had just finished lunch and was working alone directly outside of the maintenance shop overhead door. The other two mechanics were working inside the shop and two other employees were working outdoors approximately 50 yards away. For some unknown reason, the victim was using an oxygen and acetylene torch to cut the lid off of the metal 55-gallon drum that had previously contained the diesel fuel supplement. While using the torch to cut off the lid the drum exploded. The explosion caused the lid to strike the victim in the head and chest and knocked him to the ground.

The explosion was loud enough that most employees heard it and rushed to assist the victim. One of the employees depressed the emergency system button sending a signal to the employers alarm company. The alarm company immediately placed a call for emergency assistance. The town police and fire departments arrived at the incident site within minutes. The state police were notified along with OSHA and they both responded to the site. The fire department transported the victim to an open park where the victim was picked up and med-flighted to a hospital. He remained in critical condition in the hospital and died seven days after the incident.

Discussion: In this case, the company had identified two major hazards associated with removing lids from large sealed metal drums: the creation of sharp edges on both the drum and the lid when a pneumatic powered opener was used, and the possibility of explosion when a torch was used for this task. The victim had researched a variety of safe methods for this task and had the company purchase a manual drum cutter. It is not known why on this day the victim elected to use a torch other than the available safe method, the manual drum cutter.

In addition to providing safe equipment, employers who use large metal containers and drums should develop, implement and enforce standard operating procedures (SOP) for safely removing the lids. A SOP for removing the lid off large metal drums should specify that a manual drum cutter or another safe method should be used and that the use of a torch in not recommended. In addition, SOP should clearly state that if it is absolutely necessary to use a torch on a large metal container or drum for any purpose then the container must be vented and purged thoroughly to make absolutely certain that there are no flammable materials present (29 CFR 1910.252).

Discussion: Routine hazard assessments of the work site should be performed to identify new or usual as well as continuing hazards. The employer should include employees in the hazard analysis. Employee participation will help provide the means, through which workers identify hazards, recommend and monitor abatement, and otherwise participate in their own protection. In addition, employees typically will know some potential hazards that the employers might overlook.

In this incident, the 55-gallon metal drum of diesel fuel supplement was the only metal drum at the facility that contained a flammable substance. Because the diesel fuel supplement had previously been delivered in 5-gallon plastic containers, the potential explosion hazard of this drum was an “unusual” hazard for this work site. Routine hazard assessments carried out during the course of the year would have identified the potential hazard and provided employees and employers the opportunity to address it as part of their ongoing safety program.

Recommendation #3: Employers should provide workers with training in the recognition and avoidance of hazards and safe work practices that pertain to their work environment.

Discussion: In this case, the employer had a written health and safety program with procedures on how certain tasks should be completed. The company also had monthly safety meeting that all employees were required to attend, but another important aspect of workplace safety is training for both new and experienced employees. Employee training will teach and reinforce awareness of hazards and knowledge of safe work practices. Training in standard operating procedures for specific tasks should be provided to all employees performing these tasks and to employees working in close proximity to these tasks.

New safety training topics can be based on the findings of hazard assessments (discussed in recommendation #2) of the facility. In addition, training should be conducted when new hazards are introduced into the work environment, such as new chemicals and equipment. It is the employers’ responsibility to routinely assess their employees work practices and to ensure that they are following safe work procedures, which they were trained in.

Recommendation #4: Employers should maintain their chemical inventory at a few months supply, whenever possible, to reduce the number of large metal containers used.

Discussion: Eliminating a safety hazard altogether is the best means of avoiding risk. In this case, because the facility did not use a lot of diesel fuel supplement throughout the year, the supplement had always been supplied in 5-gallon plastic containers, except for the last delivery preceding this incident. It was estimated that the 55-gallon metal drum of supplement had been onsite for more than 12 months. If the employer had continued use of the 5-gallon plastic containers, the need to remove the lid off of the sealed 55-gallon metal drum for recycling and the related explosion would have been eliminated. 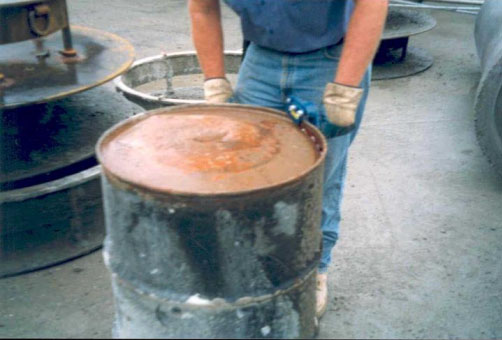 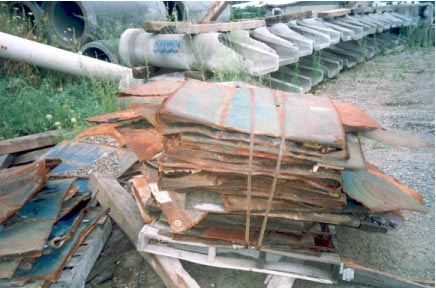