A 29-year-old male factory worker (the victim) died after his head became caught at the point where an overhead chain conveyor made contact with an idler, or pinwheel, that allowed the conveyor to make a 90-degree turn. The conveyor was over seven feet above the floor, but the victim, who was 6’7″ tall, was standing on a platform that enabled him to reach the hooks on the conveyor to hang transformer canisters for delivery to a paint booth. No one saw the victim get caught at the nip point, but his supervisor heard him call out and immediately pushed the emergency stop button. Because there was no way to reverse the conveyor, a welder was brought from another area of the plant to cut it in order to extricate the victim. In the meantime, emergency medical services (EMS) had been called; they arrived in less than two minutes. The victim was transported to a local hospital, and later transferred to a regional trauma center, where he was pronounced dead at 9:30 p.m. In order to prevent similar incidents, the KY FACE investigator recommends that:

On May 7, 1998, KY FACE was notified of the death of a 29-year-old male at a manufacturing plant on May 5. An investigation was initiated. The KY FACE investigator travelled to the scene on May 18, but was asked by the employer’s Safety Director to delay the site visit until the Occupational Safety and Health (OSH) investigation was completed. Consequently, a return visit was made on July 17, and the Safety Director was interviewed. She shared her documents and photographs of the scene. Later, a copy of the OSH report was obtained and reviewed, and the case was discussed with the OSH inspector.

The employer was a corporation that manufactured electric transformers. The company had been in business for 180 years, and at this particular location since 1969. Three hundred persons were employed at this location at the time of this incident. The company had a full-time Safety Director and a written safety program. This was the company’s first fatality.

The victim began working for the employer only three days prior to the incident. He had previously worked in another factory and as a security guard. He was hired as a finish operator, whose duties were to hang varying sizes of transformer canisters on the overhead conveyor, to be transported through the paint booths. The day of the incident was his first day on this particular job; at the time it occurred, his trainer had just walked over to a paint booth.

On the day of the incident, the victim’s shift had begun at 7:00 a.m. He was being trained to hang metal transformer canisters on hooks on an overhead chain conveyor for movement through booths where they would be spray painted. The transformers were of varying sizes, and the finish operator would choose a hook proportionate to the size of each transformer. These hooks would be put on the transformers and then attached to other hooks on the overhead conveyor, which were spaced six inches apart. A transformer was to be hung on every other hook. In order to reach the hooks attached to the conveyor, the victim, who was 6’7″ tall, stood on a hydraulic lift platform situated directly beneath the nip point where the chain conveyor met the idler wheel that allowed it to turn the corner. The idler wheel had never been protected by any type of guard. The lift platform had a switch on top that allowed it to be raised or lowered to varying heights (up to approximately 24 inches) by the finish operator’s foot. On the day of the incident, the lift platform was situated 58 inches from the 5-inch-long hook on the conveyor. (See Figure 1.) 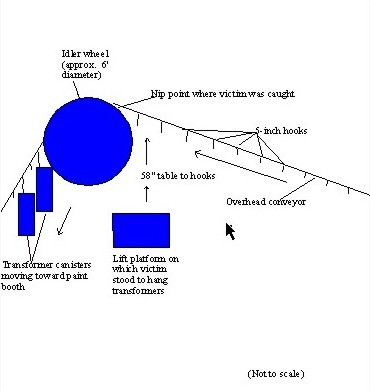 The incident occurred at 9:50 a.m. The victim was alone, as his trainer had just walked away for a few minutes. The supervisor, who was nearby, heard the victim call out, and ran to push the emergency stop button, which was located on the wall behind the lift platform. The victim’s head was caught in the ingoing nip point of the chain conveyor and the idler wheel. Because there was no way to reverse the conveyor, and 30 workers pulling were unable to release the tension, a welder was brought from another area of the plant to cut the chain to extricate the victim. In the meantime, emergency medical services (EMS) had been called. As their post was only one block from the plant, they arrived in one minute, 40 seconds. The victim was immediately transported to a local hospital, and later transferred to a regional trauma center, where he was pronounced dead at 9:30 p.m.

Although there were no eyewitnesses, immediately following the event the Safety Director and others present noticed that there were two hooks rather than one before the last canister the victim had hung. They believe he may have felt he was getting behind in his work, and may have tried to hurry, leaning nearer the nip point than was safe. The overhead conveyor operated at only one speed; thus it would not have been possible to have slowed the machine during a new employee’s training period.

The cause of death was listed as post-traumatic pulmonary insufficiency due to closed head injury, due to machinery accident.

Discussion: If this platform had not been directly underneath the ingoing nip point created where the chain conveyor met the idler wheel, the victim would have been outside the danger zone. The platform had been used in this position since 1991. However, the victim was unusually tall (6’7″) – probably the first person tall enough to become caught. Following this incident, the company moved this work zone a safe distance away from the idler wheel.

Recommendation #2: Guarding should be placed around ingoing nip points.

Discussion: A fixed metal guard placed over the idler wheel would prevent workers from being caught in the ingoing nip point created by the chain conveyor. Although the idler was more than seven feet above the floor, it was not more than seven feet above the raised lift platform, and thus should have been guarded (29 CFR 1910.219(b)(1). The day following this incident, the company installed a barrier guard to shield the area where the conveyor chain meets the idler wheel.

Discussion:In this case, the trainer had left the area to go to the nearby paint booths. In the few minutes that he was not observing the victim, the fatal incident occurred. It is believed that the victim felt that he was getting behind in his work, and rushed to try and catch up. Had the trainer been present he might have been in a position to avert the incident. Additional precautions should always be taken with new employees during their initial training period.

Recommendation #5: All workers should be trained to recognize and avoid hazards in the workplace.

Discussion: Employers must train their workers in hazard recognition and avoidance, and when workers are seen performing acts that are hazardous, retraining or effective disciplinary measures must be taken. In this case, neither the trainer nor the new worker recognized the hazard posed by the unguarded ingoing nip point.

A Basic Guide to Machine Safeguarding. 1991. Office of Training and Education, Occupational Safety and Health Administration.