A 41-year-old self-employed logger was killed when the end loader he was driving down a steep mountain road rolled over. Recent rainfall had made the dirt road wet and muddy. Tire marks left in the mud indicated that as the vehicle began to slide downhill, it hit the right embankment, causing it to veer to the left side of the road and roll over several times before coming to rest at the bottom of the drop-off on its left side. The victim was ejected from the vehicle and was found lying facedown about halfway between the edge of the roadway and where the vehicle came to rest. A non-manufacturer-issued rollover protective structure (ROPS) had been welded to the end loader; however it was not able to sustain the weight of the machine during the rollover and was crushed in the fall. The vehicle was not equipped with a seatbelt. In order to prevent similar occurrences, FACE investigators recommend:

On 7 August 1995, a 41-year-old male was killed when the end loader he was operating rolled over the edge of a steep mountain road and down a hill. KY FACE was informed of the incident on 8 August 1995 by the county coroner who was present at the scene. An investigation was immediately initiated. Two KY FACE investigators traveled to the scene with the coroner on 21 August 1995. The coroner and a state police officer who had been present at the scene were interviewed. Copies were obtained of the coroner’s report, police report, emergency medical service (EMS) report, death certificate, toxicology report, and photographs of the scene taken by the coroner. Photographs and measurements were taken of the site and the end loader. An equipment dealer was consulted via phone at a later time.

The victim in this incident was a 41-year-old self-employed logger and part-time minister. He had been involved in the logging business for about 1-½ years and worked with his son on mountain land that they leased for logging, but had previously been a coal miner for 20 years and had experience operating heavy equipment. He was married and had been in generally good health.

At the time of the incident, the victim was operating a Michigan end loader, model #55-AG, manufactured in 1960, with four-wheel drive and rear wheel steering, and a total weight of approximately 13,000 pounds. This machinery was used to load logs onto a truck; however the victim was not transporting logs at that time. Although the vehicle was equipped with a roll bar-like structure, the device was not issued by the manufacturer and it is not known if it was installed for protection purposes or possibly for shade and/or a guard against low-hanging tree branches. (According to a Michigan dealer, a ROPS kit is not readily available for this end loader.) The roll bar on the machine had been made from angle iron and steel pipe, with a rubber roof, and had been welded to the end loader. However, during the rollover the welding gave way; the roll bar came off the machine and was crushed by its weight. (See photos below.) The end loader also was not equipped with a seatbelt. The air-filled tires were 3 feet 11 inches high with a width of 12 inches; treads were worn and smooth.

The incident occurred on a steeply inclined stretch of dirt road, about 9 feet wide and 60 feet long, with a slope of approximately 20 degrees. On the right side of the road (when descending) was an embankment with trees and on the left was a drop-off into some brush that bordered on a relatively flat, open dirt area used for loading. Recent rainfall at the site had made the dirt road wet and muddy. 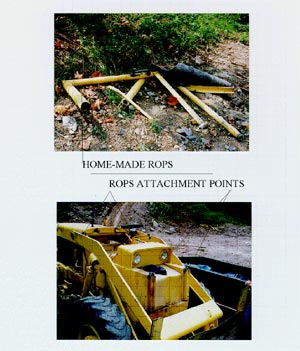 The victim was working alone at the time of the incident while his son was working in another area farther up the mountain. The incident occurred at approximately 2:00 pm as the victim was driving the end loader down the steep stretch of road from the logging site to the loading area and lost control of the vehicle. It is unclear why the victim had been using the end loader on this hill because it was not his usual practice unless he was transporting logs to be loaded onto the truck. As he traveled downhill, the vehicle apparently began to slide, leaving tire marks in the mud about 10 feet long. Indentations in the mud indicated that the right front tire apparently struck the embankment, causing the vehicle to veer toward the left side of the road and then roll over the edge. The victim was thrown from the vehicle as it overturned several times before coming to rest on its left side at the bottom of the hill. The victim was found lying facedown about 15 feet from the edge of the road, while the end loader was 37 feet 9 inches from it.

The victim’s son, who had been working in another area of the logging site, discovered him when he came back to the loading area. The ambulance service received a call at 2:17 pm and were the first to arrive on the scene. The county coroner was called at 2:45 pm and the victim was pronounced dead at 3:00 pm. State police officers arrived at 3:11 pm and took photographs and measurements of the scene.

Cause of death as stated on the coroner’s report was blunt force (crushing) trauma of chest and abdomen. Toxicology reports were negative for any blood alcohol or drugs. No autopsy was performed.

Discussion: Although in this case it is not known if the steel pipe structure was welded onto the end loader to serve as protection in a rollover or as a shield from sun and tree branches, an appropriate dealer-installed ROPS and restraint system could have kept the operator in the protected zone during the rollover, decreasing the risk of injury. If the device was intended for safety purposes, it was inadequate to handle the weight of the machine when it rolled over. It came completely off the machine and was mangled and crushed in the rollover. Additionally, there was no seatbelt on this piece of equipment, so the operator fell out of the driver’s seat before the machine rolled over on him.

Discussion: Recent rains had caused the steep dirt road to be muddy and slick, and thus more hazardous than usual. Heavy equipment such as this end loader should not be operated under conditions which alter normal operating capabilities of the equipment.

Recommendation #3: Equipment should be maintained in good working condition.

Discussion: The tires on this end loader were almost worn out. The tread was worn down so that good traction could not be maintained. Also, the tires contained no fluid, which might have provided greater stability and traction. These problems compounded the problems discussed in #2 above (steep slope; muddy conditions).

Recommendation #4: When possible, operators of heavy equipment should not work alone.

Discussion: The large proportion of work-related fatalities that are attributable to machines such as the end loader in this case indicate the need for a “buddy system.” In many cases, immediate notification of emergency medical personnel could make a crucial difference.

Recommendation #5: A countywide 911 emergency calling service should be initiated.

Discussion: Although it would not have made a difference in this particular case, since 911 telephone service is universally recognized by the public as the number to call in the event of an emergency, it should be implemented countywide.