On June 27, 2003, a 28-year-old male sound technician died due to injuries received after falling approximately 50 feet from a lift. Three men (one chief sound engineer and two sound technicians) were sent to repair a sound system in a school gymnasium. Upon arriving and assessing the situation, the three diagnosed that a particular speaker, located in the rafters, should be removed from its location. Using a 30-year-old telescoping, self-leveling lift belonging to the school, the chief engineer used controls located at the base of the lift, to hoist the two sound technicians to the speaker in the rafter. After determining which tools they needed to remove the speaker, the chief engineer lowered the two men to the ground. They retrieved the appropriate tools from their equipment truck and proceeded to be hoisted a second time to the speaker. After removing the speaker from the rafter, the two sound technicians placed the speaker in the middle of the lift’s basket and the chief engineer reversed the direction of the lift and began to lower the two men and the speaker to ground level. Shortly after the lift began to descend, it started to tilt to the east side of the gym. The lift continued its fall to the ground. Both sound technicians were critically injured and transported to a hospital where one survived and the other died of multiple blunt force trauma.

The following recommendations have been made to help prevent further similar incidents from occurring:

The Kentucky Fatality Control and Evaluation program was notified by a coroner’s office on June 27, 2003, of an occupational fatality. That same day, a FACE evaluator went to the scene and interviewed the coroner, a witness and the company owner and spoke with a Kentucky Occupational Safety and Health compliance officer. Pictures of the lift were taken.

A school was having difficulty with a sound system in a gymnasium and had contracted an outside sound company to diagnose and repair the problem. The contracting sound company had installed the sound system and had also maintained the system over the years. As with previous repairs and maintenance visits to the school, the contracting company used the school’s telescoping, self-leveling lift device to access components of the sound system not accessible from the ground.

Safety procedures were routinely addressed by the company’s owner and the subcontractor was familiar with the sound company’s safety practices. Safety harnesses were available at the job location in the equipment truck with other work tools and equipment.

Previous to the repairmen’s arrival, the school custodian had placed a self-leveling, telescoping lift in the middle of the gym floor under the speaker located in the middle gym rafter. Upon arriving and assessing the situation, the men selected a different speaker to use as reference in locating the sound system’s problems.

The chief sound engineer relocated the lift under the selected speaker. This included placing the four stabilizing outriggers out on the floor to help secure and balance the lift once it was in place. Leveling legs were also used to level the lift. There were two sets of controls on the lift. One set was located at ground level and was situated for a person on the ground to operate the lift up and down. The other control device was in the basket of the lift so occupants of the basket could control the up and down movement of the lift. The control device in the basket was unoperational, and the chief sound engineer controlled the up and down movement of the basket by the control panel at the base of the lift.

The two sound technicians entered the lift basket and the chief sound engineer proceeded to operate the controls located at the base of the lift to hoist the men to the speaker located in the rafters of the gymnasium. After assessing which tools they needed to remove the speaker from the rafter, the chief sound engineer used the controls to bring the technicians back to floor level.

The men then retrieved the necessary tools from the work truck located outside the building and returned with the tools by way of the lift, back up to the selected speaker in the rafter which was approximately 65 to 70 feet in the air. After removing the speaker and placing it in the middle of the lift floor, the chief sound engineer proceeded to lower the lift with the speaker and two technicians down to the ground. When the lift had descended approximately four to five feet, it began to tilt to the east side of the gym. As it became apparent the lift was falling to the floor and could not be stopped, the chief sound engineer ran away from the falling lift. The lift fell approximately 55 feet and the chief sound engineer immediately checked on the two men when they hit the floor and called emergency medical services who arrived at the scene within four minutes of being contacted. Both technicians were transported to a local hospital where one suffered severe injuries and the other was pronounced dead 18 minutes after arriving at the hospital.

The Certificate of Death listed the cause of death as due to multiple blunt trauma injuries.

Recommendation No. 1: Training of supervisors and employees on equipment should include, but not be limited to: load capacity and weight calculations, work height and use of outriggers.

A competent person should be trained in calculation of the load capacity for lift equipment and be knowledgeable of work heights and outriggers. KY OSH Standard 1910.29(a)(3)(i) states the work height of a mobile work platform should be no more than four times the base and when this is not possible, outriggers should be used. It is believed that the combined weight of the two workers and the speaker were below the 500 pound limit of the platform of the lift. The outriggers had also been used, but it is unknown if they had been extended to an adequate distance to compensate for the additional height of the lift.

Recommendation No. 2: All equipment should be maintained on a regular basis and maintenance records kept up-to-date. If equipment is borrowed, the borrower should inspect these records prior to using the equipment and receive appropriate safety training pertinent to the equipment.

The lift involved in this fatality was purchased prior to 1970. Maintenance records for the lift were unavailable at the time of this investigation and thought not to exist. Owners of equipment should follow the manufacturer’s recommendations on operating and maintenance and inspection schedules. According to several lift equipment manufacturers, the metal cables of the lift required regular greasing in order to keep the lift functional.

When borrowing equipment from a customer, the competent person or job foreman should check maintenance records and perform an operating test to ensure the equipment is in proper working condition. The contractor had used this particular lift before without incident and trusted it would perform as it had before. At the time of use, equipment owners should hold refresher training on equipment operations and safety before equipment is used by the borrower.

Recommendation No. 3: Older equipment should be inspected to ensure it complies with the latest requirements of the American National Safety Institute and the Occupational Safety and Health Administration Standards. 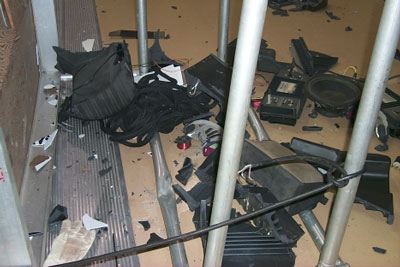 Telescoping lift basket that fell with the two workers
and a speaker inside. 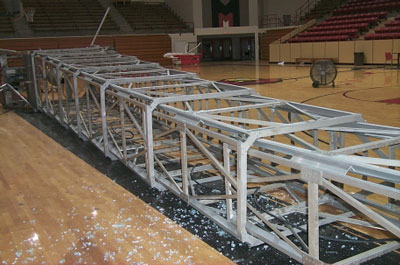 Picture of lift on its side from the basket end to the
base end where ground control panel was located. 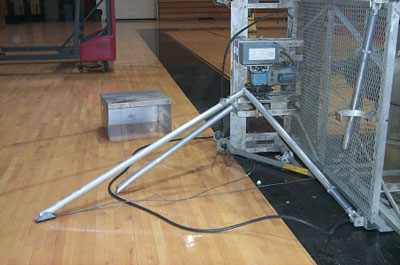 Picture of control ground control panel on its side and
outrigger used to stabilize the lift. Notice it had been
extended for use. 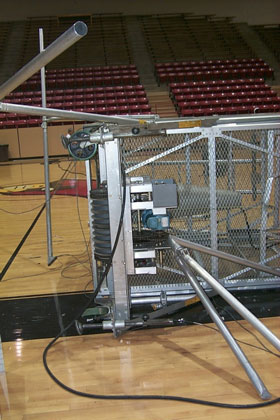 Base of telescoping lift on its side. Notice
outriggers and leveling legs were in place
to balance the lift.