Construction Laborer Dies from Heat Stroke at End of Workday

On June 27, 2003, a 41-year-old, male laborer died from heat stroke one day after being taken to the hospital. The laborer was working on an addition to a factory sawing boards to make concrete forms. He worked until 5:00 pm that day and was in the parking lot on his way to his vehicle when he apparently collapsed beside his vehicle. A worker on the second shift at the factory was taking scrap material outside to a dumpster when he found the laborer on the ground. The factory worker returned to the plant and told his supervisor there was a man on the ground in the parking lot who needed emergency care. After instructing the company receptionist to call for emergency medical services, the supervisor went to the parking lot to administer emergency care to the laborer until EMS arrived. When EMS arrived, they recorded the laborer’s body temperature as 107 degrees F. The laborer was transported to a local hospital where he died the next day with an internal body temperature of 108 degrees F. Death was listed by the coroner as
due to heat stroke.

To help prevent similar incidents from occurring, the following recommendations have been made:

On June 27, 2003, via the coroner, the Kentucky Fatality Assessment and Control Evaluation program became aware of an occupational fatality involving heat stroke. A site visit was made on July 1, 2003, and the decedent’s employer and witnesses were interviewed.

A 16-year-old construction company which primarily laid pipe, poured concrete, and built foundations and walls, was contracted to expand a manufacturing facility. Employees on the job site usually numbered from nine to 15, but on this day, only 6 employees (including the job foreman) were at the job site. Toolbox talks were held by the foreman on a weekly basis, or as needed to address changes in the scope of the work.

There was water available at the work site for the workers to drink. The laborers took their morning, lunch and afternoon breaks in the air-conditioned construction trailer on site. Workers were allowed to use the trailer to cool down if they felt over-heated during the work day. According to the coroner’s report, the temperature that day was 90 degrees Fahrenheit. Also, according to a local weather reporter, the dew point was a humid 69 degrees.

The decedent, a certified welder, had been hired by the construction company to perform welding duties for the expansion of the manufacturing facility. On the day he collapsed, he had been employed by the company for one day.

There were six workers on the job site, including the foreman and the welder. Work commenced at 7:00 am and stopped at 5:00 pm; lunch was taken between 12:00 pm and 12:30 pm. The work crew spent the day fabricating forms for concrete footers. The decedent worked as a laborer sawing 2 x 4 boards in varying lengths to make wooden forms. He wore a hard hat and tool pouch and used a hammer, a sledge hammer and a saw that day.

It was observed at lunch that the decedent did not eat, but did drink water. It was also observed that the welder was dressed in heavy blue jeans, a tee-shirt and a long-sleeved heavy shirt. At approximately 5:00 pm, work ended and the laborers left to go home. Most of the workers had parked their vehicles near the construction trailer. The decedent had parked in another parking lot near the entrance of the manufacturing facility. As the welder began walking to his car, the job foreman asked him if he wanted a ride to his car, which the welder accepted. The two men conversed during the ride and the foreman dropped the welder off at the end of the parking lot where the victim’s car was parked.

At approximately 5:30 pm, an employee from the manufacturing facility took a load of scrap metal outside the building to dispose in a scrap metal container. The employee noticed someone lying on the ground in the parking lot. He immediately approached the body on the ground, found the welder unconscious and realized emergency medical help was required. The employee immediately informed his supervisor of the situation then returned outside to assist the victim on the ground. A representative of the manufacturing company contacted emergency medical services, who arrived within minutes of the call.

Emergency services arrived, cut the welder’s clothes off, took his vital signs, and then called for an ambulance. As they waited for the ambulance to arrive, emergency personnel requested water be brought to the scene. Manufacturing employees provided water and paper towels for the emergency personnel who tried to cool the welder off by pouring water over the welder’s chest and stomach and applying cool compresses to his face and neck. One of the first witnesses on the scene, observed the decedent’s heart beat through his shirt and his body jerking. The ambulance arrived and transported the laborer to a hospital where he was admitted with a temperature of 108 degrees Fahrenheit. He died at the hospital the next day due to heat stroke.

The coroner listed the cause of death as due to heat stroke.

Recommendation No.1: Employers should train supervisors and employees to recognize symptoms of heat exhaustion / stroke when working in high heat index and / or humid conditions.

According to, “The Physician and Sports Medicine”, heat stroke occurs when the body’s ability to dissipate heat is impeded either due to disease or physical exertion. Signs of heat stroke are: the person stops sweating, becomes dizzy, confused and/or disoriented, rapid pulse rate, dizziness, nausea, headache, or a high body temperature of 103 degrees Fahrenheit (1). External temperatures over 82 degrees Fahrenheit increase the risk for heat exhaustion / stroke (2). Employers and employees should observe each other for signs of heat exhaustion / stroke. Workers should be trained to know and understand company procedures for reporting a worker exhibiting symptoms of heat stress / stroke.

Recommendation No.2: To avoid dehydration and heat exhaustion / stroke, employees should be given frequent breaks and be provided drinking water and other hydrating drinks when working in humid and hot conditions.

While working in heat, staying hydrated is important. Drinking the appropriate amount of fluids such as water and/or sports drinks that replace the body’s electrolytes helps the body maintain its appropriate temperature. It is suggested to match fluid loss from the body with fluid intake (3). Besides drinking plenty of fluids, employees should wear light colored clothing and fabrics that wick away moisture from the skin (3). Though, not a factor in this incident, when the weather is conducive to heat exhaustion / stroke, workers should also avoid consumption of alcohol and caffeine (4).

Recommendation No.3: Work hours should be adjusted to accommodate environmental work conditions such as high heat index and/or high humidity.

When high temperatures are predicted, employers should consider changing work hours to accommodate the weather. Instead of working in the heat of the day, work hours could be changed from 6:00 am to 2:30 pm, or at a time when heat and humidity exist at a lower level. 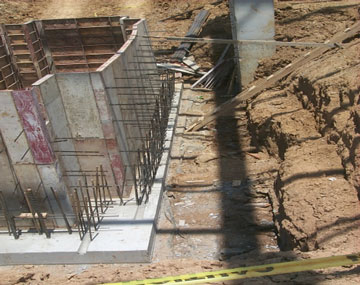