A 22-year-old male employee died after being caught in a cable while operating a wood-chipping machine at a sawmill. The family-owned (Amish) business had been in operation for several years with about 10 employees, although the number varied throughout the year. The process included discarded wood pieces from the sawmill, which were carried on a conveyor belt and fed into a wood chipper. The discharge chute was attached to a section of round duct, which was used to transport the chipped material into a hopper. The material was collected in a container below the hopper, and removed from the area. On the day of the incident, the round duct became plugged. The victim stood on a platform, and with the assistance of another employee, he removed the access cover on the hopper, and pushed a straight cable into the duct to clean out the duct while the chipper was running. According to the supervisor, the cable was marked with paint, to designate how far the cable could be inserted into the duct. The cable got caught in the chipper and wrapped around the employee’s neck causing him to be thrown off the platform instantaneously. An employee called the local sheriff for assistance using a cellular phone, since there was no phone at the sawmill. The County sheriff, county EMS (Emergency Medical Service), and local fire department Jaws of Life responded to the call. The victim received multiple cervical fractures and died within minutes. 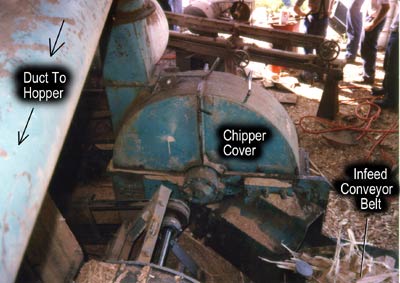 RECOMMENDATIONS based on our evaluation are as follows:

At 4:15 PM on July 6, 1998, a 22-year-old male employee died after being caught in a cable while operating a chipper. The Iowa FACE program was notified of the incident by the Iowa Department of Public Health on October 20, 1998. Investigators had difficulty contacting the employer since the sawmill was not listed in the phone book. On December 30, 1998, an on-site evaluation was conducted, and a FACE investigator also met with the deputy and county sheriff. Photographs, which were taken by the county sheriff following the incident, were reviewed. At the time of the FACE evaluation, it was noted that several modifications, which were required by the Department of Labor, were already completed at the facility.

The incident occurred at a small rural family-owned sawmill that had been in operation for several years. The facility employed 10 employees throughout the year, although the number varied depending on the work load. The facility did not have an established safety program, safety training, or a lockout / tagout program.

The sawmill was in operation throughout the year. Some of the processes were located outside in the open air, while other operations were inside. The conveyor belt is located outside the building and the chipper is located near the building. The chipped material then passes through a duct, to the hopper, which was located inside the building. The chipper was purchased used and installed about a year before the incident. The chipper wheel is run by means of a diesel engine that operated a hydraulic pump that turns the wheel at 900 revolutions per second (rps) which chips the slabs of wood into small pieces. There were no guards on the in-feed section of the chipper.

The discarded wood pieces (slabs of wood and bark) that the head saw cuts from the logs are transported by means of a vibrating type conveyor belt and are fed into the chipper. The chipper is approximately 4 feet in diameter and has a 4 inch solid steel wheel with three knives that chip the wood. The wheel also has three paddle type pieces of steel mounted on the outer surface of the wheel to carry or push the wood chips into a 12 inch diameter pipe to a hopper, which was 11 feet from the chipper. The material was then loaded into containers and removed from the area. During normal hours of operation, the conveyor belt and the chipper were in operation continuously, and did not have an emergency shutoff. The chipper would become blocked about once a month and the entire process may have to be shut down to unclog the chipper 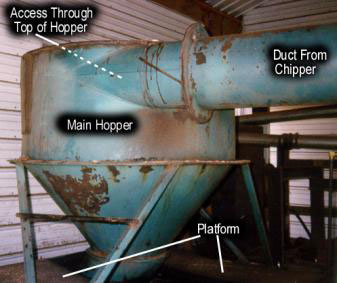 When the duct would become plugged with wood chips, the employees were instructed to use a straight cable 28 feet in length and 5/8 inch in diameter to unplug the duct. The victim was familiar with operating the chipper, and had cleaned or unplugged the chipper several times. According to the supervisor, the cable was marked with paint, to designate how far the cable could be inserted into the duct. During the evaluation, it was noted that the painted mark was worn off the cable and was no longer visible.

On the day of the incident, the duct had become plugged, and the entire process was shut down. The victim climbed onto a platform (about 4 feet high) and took the straight cable to unplug the duct. He had the cable laying over his shoulder and was feeding it into the duct. Another employee assisted him by climbing inside the main hopper to help push the cable through the duct. The employees were able to make a hole in the wood chips and pulled the cable back out. The supervisor saw the employee on the platform and walked by the area, tugged the victim on the pant leg and shouted to remind him to watch for the paint marking on the straight cable. The victim acknowledged this and then turned the chipper back on so as to help unplug the pipe and shoved the cable into the pipe again. The cable caught in the chipper, and wrapped around the employees’ neck causing him to be immediately thrown off the platform. The hopper was approximately 15 feet away from the chipper and the cable was 28 feet in length, and as the remaining cable was pulled into the chipper, it wrapped around the victims neck and he was thrown off the platform. The victim received multiple cervical fractures, and died instantly. The other employee that was assisting him received minor lacerations. An employee called the local sheriff for assistance using a cellular phone, since there was no phone at the sawmill. The local sheriff, county EMS, and local fire department responded to the call.

Following the incident and subsequent OSHA investigation, several changes were instituted at the sawmill. A safety program was initiated with general safety training and training specific to lockout / tagout procedures. A lockout / tagout program was implemented which included instruction for the employees on how to safely turn off the chipper whenever the duct became plugged. Tags were attached to the equipment to identify the machine specific lockout procedures. An access panel or clean-out port, was installed in the duct to facilitate easier cleaning. A grate was welded to the top of the main hopper to prevent access.

Although the weather was hot and humid in July, environmental conditions were not a contributing factor in the incident.

The immediate cause of death was a spinal cord transection due to multiple cervical fractures.

1. Employers should establish an energy control program in accordance with the requirements of 29 CFR 1910.147. The program should include procedures and employee training to ensure that equipment is locked out and rendered inoperative, before any employee performs servicing or maintenance on a piece of equipment.

Discussion: The standard requires employers to place a lock on the machine before maintenance, and also when an employee works at the in-feed / discharge area to unclog the chipper. The energy control program should include step-by-step procedure and documentation. In this case, machine access covers and doors should not be opened, or the machine should not be maintained while it is running. When pushing clogged wood chips, there was a danger that the cable would reach the chipper and may cause serious injury to the worker.

2. All maintenance tasks should be carried out only when the machine is locked out. Employers should ensure that machinery operate properly and do not frequently cause hazardous maintenance tasks.

Discussion: The wood chipper in this case had become clogged frequently. A clean out system had been devised, which included using a long steel cable to push the clogged wood chips while the machine was running. This procedure was dangerous because the steel cable could easily be pushed too far into the chipper blades, which happened in this case. It appeared that the clogging was a frequent event, and therefore the chipper discharge did not function properly. This could be due to poor machine design such as, bends in the discharge pipe, restricted airflow, or other problems. To ensure safety, it is important to ensure that machinery are in good operational working order, and do not cause excessive hazardous maintenance.

3. Employers should ensure that a job safety analysis has been performed on all work-related tasks.

Discussion: Job safety analysis (JSA) is a procedure used to review methods or steps for a particular task in order to identify potential hazards. Employees are encouraged to participate in job safety analysis. The task can be broken down to a sequence of steps or actions, which are used to identify hazards connected to the task or produced by the environment. Once the hazards are known, the proper solutions can be developed to eliminate or control hazards. In this case, a job safety analysis may have identified the hazard of removing the access door and inserting the cable. Modifications could have been made to eliminate the hazard.

4. Employers should develop, implement, and enforce a written safety program.