Towman Crushed To Death While Hooking Up Disabled Propane Truck 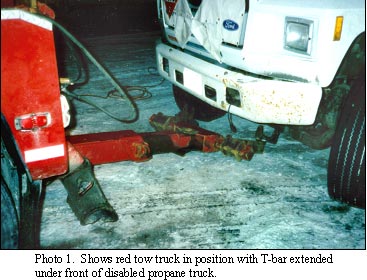 A 59-year-old owner of a towing company with a lifetime of experience was killed when he was pinned between a disabled propane truck and his tow truck. The propane truck had broken down after making a delivery to a private rural residence, and was parked on a sloping farm driveway, which was 100% snow and ice covered. The brakes were set, transmission put in gear, and a block was put in front of the left rear dual tires. The tow truck arrived to remove the vehicle, and the operator (victim) was under the front end of the propane truck, trying to position the forks of the T-bar to connect the axle of the disabled truck. Suddenly, the propane truck slid forward on the ice and crushed the towman against the T-bar (stinger) of the tow truck. The man died instantly from crushing chest injuries. 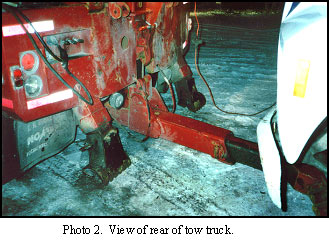 During January 2001 a 59-year-old experienced towman died while working with a disabled propane truck at a rural residence in Iowa. He was the second-generation owner of a family towing business. The Iowa FACE program learned about the incident from a local newspaper, and began an investigation. Information was gathered from the Medical Examiner’s office, death certificate, other towing companies, the local Sheriff’s department report and photographs, and from the victim’s son who was now running the towing business.

The towing company had eight employees and had been in business for over 60 years. It was a family operation with family members conducting most aspects of the towing business. There was no official safety program in place. Only the victim and his sons performed towing services, and only these men drove the tow trucks. They had considerable experience in towing, having done the job from their youth. Other family employees worked in the shop / office area, and were not directly involved with towing.

It was a bitterly cold day in January, and the propane truck had repeated trouble starting and running. It finally stalled after making a routine propane delivery at a private farm residence. The propane truck was a 2-axle model, with 15,000 kg (33,000 lb) gross capacity. This truck was parked on a gravel farm driveway, which had a downward slope of 4-6%. The front of the propane truck was pointing downhill to the west. The driver set the air brakes, put the transmission in gear, and positioned a wooden block in front of the left dual tires. The gravel road surface was completely covered with ice, with a thin layer of snow on top. It had been a sunny day, which may have been a factor, causing the icy surface to be glazed over. 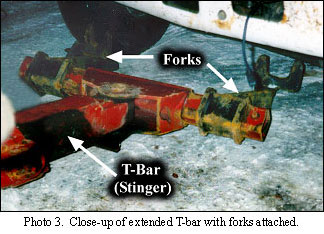 The towman, accompanied by his wife, arrived about 5:30 P.M and began to hook up the propane truck. The tow truck was a 1985 model, a 25-ton, three-axle wrecker with a gross capacity of 36,000 kg (80,000 lbs). It was backed into position in front of the propane truck and the victim proceeded to hook up the disabled vehicle. The road surface was flat between the two trucks, and there were no obstructions in his way. The man’s wife was in the tow truck cab, and reported feeling the vehicles bump together, but was not alarmed, for this seemed typical. After some time of inactivity, she ventured outside to find her husband lying on top of the T-bar of the tow truck, crushed against the front axle of the propane truck. The man was dead at the scene.

The Sheriff’s department investigated the scene that night taking several photographs, and again the next day before the propane truck was removed. Photographs show the tow truck in position, with the stinger extended, with both forks in the ends of the T-bar (see Photo 3). From marks made in the snow, it was evident the propane truck had slid forward on the ice about 1.2 meters (four feet). The wooden block in front of the left rear tires had slid forward about 0.3 meters (one foot), then dug into the snow, and shot backwards as the tires moved over it. There were no other blocks or tire chocks used for other wheels.

It is unclear whether the victim was attempting a “single pick” or a “double pick” with this propane truck. The single pick method is used when there is adequate ground clearance to connect the T-bar forks to the front axle of the disabled vehicle. The double pick method is used when the front axle is too low to accommodate the T-bars with forks attached. In this case, the T-bar alone is first used to raise the front axle off the ground. Then blocks are put under the wheels to increase ground clearance. Towing forks are then attached to the T-bar, and the forks are connected to the front axle and the disabled vehicle is then raised off the ground for towing. From photographs it is evident the forks were attached to the T-bar, which suggests the victim was in process of making a single pick. The victim’s son stated that he had towed that same propane truck in the past, and had done it with a single pick. From the investigation it is not fully clear what the victim was doing at the time of the accident, and whether there was some force or bump from the tow truck or its stinger, which initiated the propane truck’s slide.

Another towing service was called in the next day to remove the disabled propane truck, and the frozen ground was still very slippery. The owner of this company stated that after attaching the propane truck, both vehicles slid about a meter (few feet) down the farm lane. This newer tow truck had “self-loading forks”, which pop up from the T-bar, thus eliminating the need for a double pick. An investigation from the Sheriff’s office measured the slope of the ground in that area to be 4-6%.

The official cause of death as taken from the Medical Examiner’s report states, “Blunt trauma to chest and abdomen due to being pinned between a winch and a propane truck”. An autopsy was performed, which confirmed this summary.