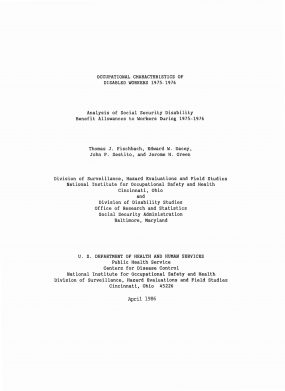 A proportional morbidity ratio study was made of workers who received Social Security (SS) disability allowances for the period 1975 to 1976. Age adjusted ratios were calculated by race and sex for 96 occupational groups and 67 disease conditions. Occupations previously identified as having excess morbidity for the period 1969 to 1973 were reevaluated. During the period of 1975 to 1976, 1,158,439 workers received SS disability benefits, 69 percent men and 31 percent women. The most frequent disabling conditions were caused by circulatory system diseases which accounted for 25 percent of awards, followed by diseases of the musculoskeletal system and connective tissue, 18 percent, and mental disorders, 11 percent. Neoplasms were the primary cause for 9.7 percent of disability benefit allowances, followed by diseases of the nervous system and sense organs, and diseases of the respiratory system. Accidents, poisonings, and violence were the primary cause of approximately 5 percent of all disabilities. Service occupations suffered the most disabled workers, followed by structural work occupations, clerical and sales occupations, and professional, technical, and managerial (PTM) occupations. Disproportionate morbidity for both time periods was identified for PTM workers, white education workers, black males in law and jurisprudence, black females doing art work, white workers in administrative specialties, white males in managerial work, and white workers in clerical and sales occupations. The authors conclude that further study of these patterns should be undertaken.