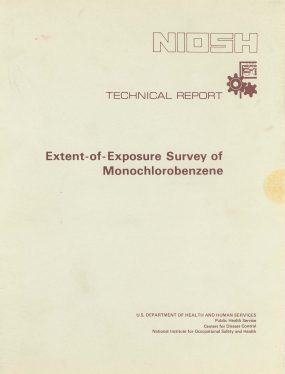 Occupational exposures to monochlorobenzene (108907) (MCB) were surveyed at three chemical companies. Twenty nine persons at company A were involved in the production of MCB; 12 persons in company B were regularly exposed and an additional 56 employees were exposed on an intermittent basis; and 12 hourly employees were regularly exposed in company C. Personal samples and air samples were taken for each job area at all three companies during all of the work shifts. In company A personal exposures to MCB ranged from less than 0.1 to 4.0 parts per million (ppm); in company B from 0.1 to 2.9ppm; and in company C from below detectable to 1.90ppm. Concentrations of MCB in all three companies were below current American Conference of Governmental Industrial Hygienists and OSHA permissible limits of 75ppm MCB. The authors note that company B was operating at low capacity during the survey, and it is unknown if MCB exposure would remain below current permissible limits during full capacity operating conditions.