Talking with Your Teens about Sex: Going Beyond “the Talk”

This fact sheet offers practical actions for parents to help strengthen their efforts to engage positively with their teens and to have meaningful discussions with them about sex. This information complements other available parent resources by emphasizing the importance of talking with teens about sex and healthy relationships. 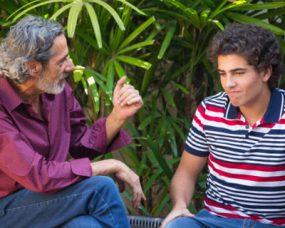 Parenting a teen is not always easy. Youth need adults who are there for them—especially parents* who will connect with them, communicate with them, spend time with them, and show a genuine interest in them. Talking with teens about sex-related topics, including healthy relationships and the prevention of HIV, other sexually transmitted diseases (STDs), and pregnancy, is a positive parenting practice that has been widely researched.1 A number of programs in a variety of settings (e.g., schools, parents’ worksites) have been shown to increase the amount and quality of communication between parents and their teens.2-4

pdf iconPrint Version
Does talking with teens about sex make a difference?

According to teens, the answer is “yes.” In national surveys conducted by The National Campaign to Prevent Teen and Unplanned Pregnancy, teens report that their parents have the greatest influence over their decisions about sex—more than friends, siblings, or the media. Most teens also say they share their parents’ values about sex, and making decisions about delaying sex would be easier if they could talk openly and honestly with their parents.5

According to many researchers, the answer is “yes.” Studies have shown that teens who report talking with their parents about sex are more likely to delay having sex and to use condoms when they do have sex.6 Parents should be aware that the following important aspects of communication can have an impact on teen sexual behavior:7

What can parents do?

When parents communicate honestly and openly with their teenage son or daughter about sex, relationships, and the prevention of HIV, STDs, and pregnancy, they can help promote their teen’s health and reduce the chances that their teen will engage in behaviors that place them at risk. Following are some actions and approaches parents might take to improve communication with their teen about these challenging, hard-to discuss health concerns.

Your teen may be getting messages about sex, relationships, and the prevention of HIV, STDs, and pregnancy from a variety of sources, including teachers, friends, health care providers, television, and social media. Some of these messages may be more accurate than others. Don’t assume that your teen’s health education class includes the information you want your child to know—school-based curricula vary from state to state.

Although you may know that having “the talk” with your teen about sex and HIV, STD, and pregnancy prevention is important, having a series of discussions that begin early, happen often, and continue over time can make more of a difference than a single conversation.

Talking about sex, relationships, and the prevention of HIV, STDs, and pregnancy may not always be comfortable or easy, but you can encourage your teen to ask you questions and be prepared to give fair and honest answers. This will keep the door open for both of you to bring up the topic. It’s OK to say you’re feeling uncomfortable or that you don’t have all the answers.

When your teen shares personal information with you, keep in mind that he or she may be asking for your input or wants to know how you feel. Let your teen know that you value his or her opinion, even if it is different from yours.

By taking your teen to regular, preventive care appointments and allowing time alone with the provider, you create opportunities for your teen to talk confidentially with doctors or nurses about health issues that may be of concern, including HIV, STDs, and pregnancy. Be prepared to suggest that you step out of the room for a moment to allow for this special time, as not all health care providers will feel comfortable asking you to leave the room.

What topics should parents discuss with their teens?

It’s important that your conversations with your teen not focus just on the consequences of risky sexual behaviors. Many teens receive these messages in health education class or elsewhere. As a parent, you have the opportunity to have discussions with your teen about other related topics. You can

comments solid icon
How can parents improve their communication skills?

Various organizations have developed programs to help build parents’ skills and improve parent-adolescent communication. These skill-building programs may be implemented in schools, health clinics, community-based settings, and even places where parents work (see Table 1 for selected examples). Parents, educators, health care providers, community based staff, and employers can work together to promote positive communication between parents and adolescents about sex.

Where can parents get more information?

Selected Programs for Parents to Improve Parent-Adolescent Communication about Sex

Parents and/or guardians of African American or Latino youth

Parents and/or guardians of 6th to 10th graders

a These programs have been evaluated and shown to improve parent-adolescent communication about sex.8-10 The selected examples illustrate different audiences of focus, including parents of elementary, middle, and high school students, as well as the variety of settings in which programs can be implemented, including community-based organizations, schools, and worksites.

b Parental monitoring occurs when parents make a habit of knowing about their teens (e.g., what they are doing, whom they are with, and where they are), setting clear expectations for behavior, and regularly checking in with their teens to be sure these expectations are being met.