Handwashing can help prevent diarrhea and pneumonia, two of the leading causes of death in children around the world. 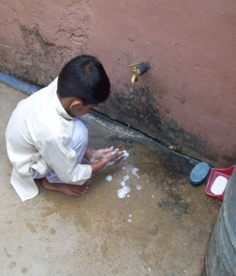 A boy in the developing world washing his hands with soap under an outdoor tap.

Sanitation and hygiene are critical to health.

Diarrheal diseases are common and largely preventable. Children are at particular risk for diarrhea and other diseases related to poor water, sanitation, and hygiene. Proper hygiene education is a critical step in reducing illness and death from diarrheal disease. In 2003, the Centers for Disease Control and Prevention (CDC) studied whether good hygiene can prevent diarrhea in young children 1. Some children in the study were given intensive handwashing promotion for 9 months, and others were not. Children whose families received soap for their handwashing stations and education about handwashing experienced approximately half as much diarrhea as children in a control group during the first 2 1/2 years of their lives, a critical time in their development 1.

What does handwashing have to do with healthy child development?

Heavy diarrhea or intestinal parasite loads in early childhood have been linked to delays in development 4-8. However, proper handwashing before meals and after going to the toilet can lower exposure to germs. This can lessen the chances of illness and chronic inflammation—leading to better nutrition intake, more energy available for growth and development, and better attendance at school 9, 10.

“…more than 200 million children under 5 years fail to reach their potential in cognitive development because of poverty, poor health and nutrition, and deficient care 3.”

Transferring these findings to benefit the general public depends on strong partnerships and collaboration. In 2012, CDC presented these findings to 6,000 pediatricians at a meeting of the Pediatric Academic Societies and to a public-private partnership for handwashing with soap.

The challenge? To replicate these results in other settings and learn more about why handwashing had this sort of positive health effect in children.

What is needed? More robust data to understand how handwashing can work to improve children’s health and development—whether by decreasing exposure to germs, increasing parent-child interactions, or both. Meanwhile, increased handwashing advocacy can be beneficial to greater segments of society.

A girl in Pakistan washing her hands with soap under an outdoor tap.

Children who got handwashing promotion reached developmental milestones 6 months earlier than those who did not.

Children whose families were exposed to nine months of a handwashing promotion tended to score better across five areas of development:

Cognitive (skills and abilities commonly thought of as mental or intellectual, with the exception of language and communication skills)—Examples include finding hidden items in a complex picture, recalling facts from a story, and memorizing lines from books, TV shows, or songs.

Communication (how effectively a child receives and expresses information and ideas)—Examples include responding to “who” or “what” questions, associating pictures with words, and identifying family members or pets when named.

Motor (ability to control and use the large and small muscles of the body)—Examples include throwing a ball, hopping on one foot, and stacking cubes.

Personal-social (abilities that allow a child to engage in meaningful interaction with adults and peers and to develop a self-concept and sense of a social role)—Examples include sharing toys, expressing emotions, and showing pride in accomplishments.

Adaptive (ability to use information and skills from four other domains above)—Examples include using eating and drinking utensils, dressing themselves, washing their hands, and blowing their noses.

Proper handwashing in children: A call to action

Expand education to families and caretakers across society so that all children can obtain the health benefits from proper handwashing, and society can obtain the productivity benefits of a healthier population. This is a low-technology and accessible practice that can go hand-in-hand with other programs to promote child well-being, such as nutritional support and parenting education.

“There can be no sharper message to proponents of maternal and child health—that acting early in a child’s life reaps the highest reward both for individuals and
societies 11.”